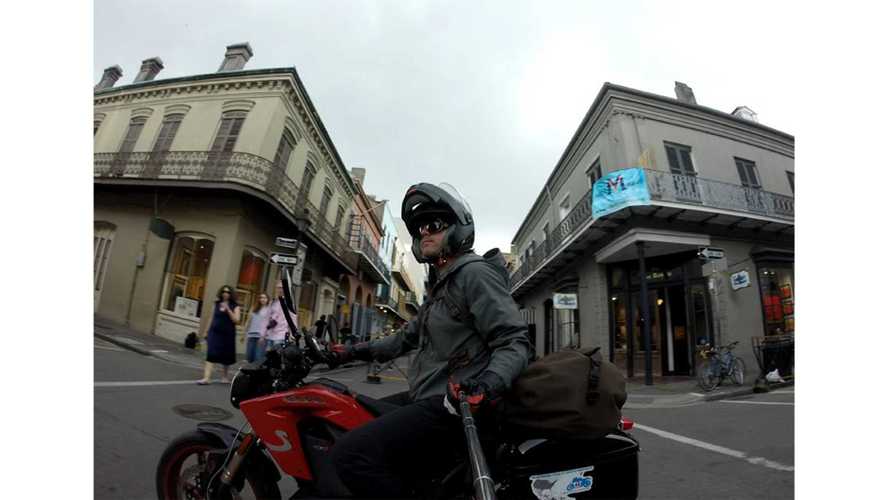 Thomas Thomczyk, an experienced rider, journalist and magazine publisher just started what he hopes will be a 12,000 mile electric journey on a Zero S.  The epic attempt started on April 2nd, and at this point he's traversing the Deep South of the US.  He's calling it the "Electric Powered Odyssey" - read all about it, and follow along with him here.

We were tempted to say, this isn't as crazy as it seems, but no, this is epically, amazingly, fabulously and wondrously insane.

Each typical day of travel would be composed of a morning ride of 60-100 mile ride, and fallowed by battery charging of 2-4 hours at gasoline stations, restaurants, hotels, etc. Each place would be compensated for the electricity used in the charging process. An afternoon 50-60 mile  ride would be concluded at an overnight rest stop where another battery charge would take place. The idea is to go at a steady pace, interacting with people, doing interviews, talks about the project with local motorcycle enthusiasts and spreading the knowledge about Wounded Warrior Project.

Hmm.  Since he puts it that way, it may not be so insane after all.  Even kind of tempting, and fun-sounding, maybe?  Remarkably, this seems like it's a pretty much stock Zero S, with no additional chargers and no streamlining - unlike Terry Hershner's and Ben Rich's cross-country bikes.

They just got some press over on NewsFix, with this interview:

Want to buy these guys a beer?  You can chip in to their coffers, here, on the CrowdRise donation site, though that all will go to the Wounded Warrior project, not their beer fund.  The Wounded Warrior Project is a group who's mission is:

Best of luck to the whole team, and we'll be tracking Thomas's progress.
++