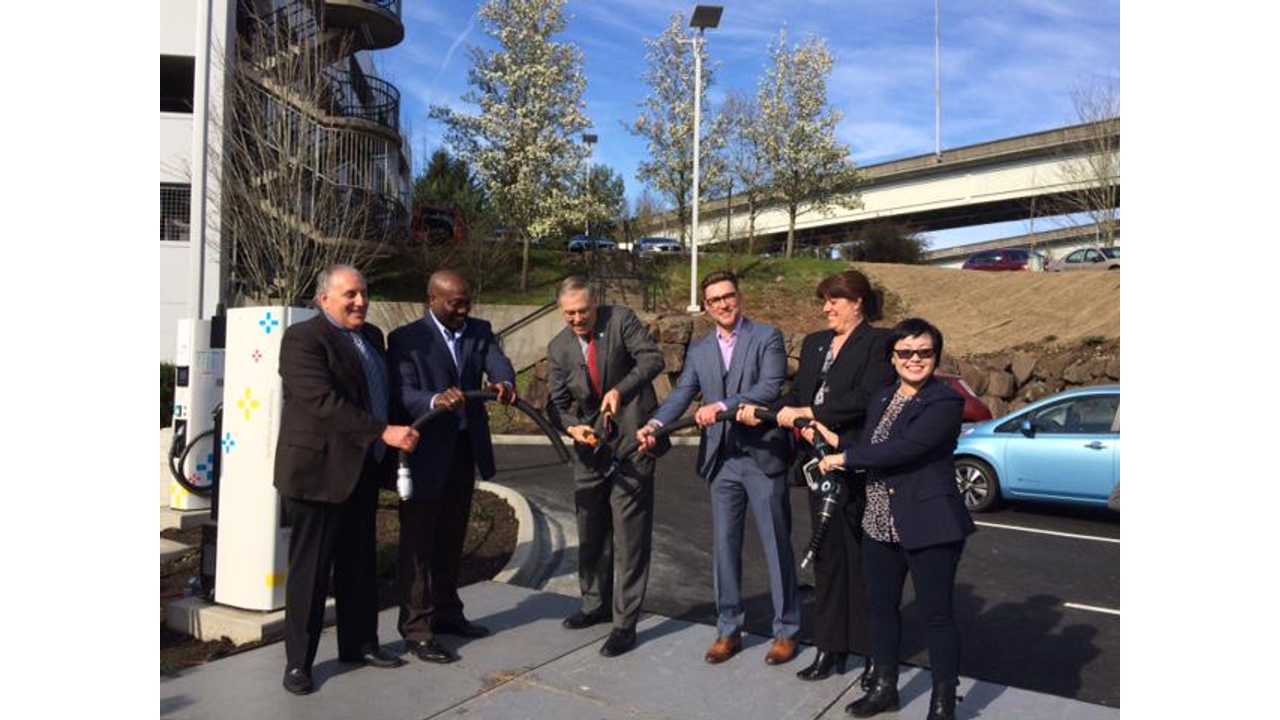 Bellevue Nissan (formerly Nissan of the Eastside at Bellevue) on the occasion of the opening of its brand new dealership outside Seattle, launched the nation's first dealership-located fast-charging depot featuring a whopping six fast-charging stations.

Bellevue Nissan is one of the nation's top-selling Nissan LEAF dealers and now has the largest group of fast chargers at any dealership in America.

Each station, provided by NRG eVgo, can charge a Nissan LEAF from depleted to 80 percent full in less than 30 minutes. According to the press release, all of the chargers are public and will be available 24 hours a day, seven days a week through EZ-Charge Card.

"The new chargers will be networked by NRG eVgo, a nationwide provider of EV quick charging, and they will be accessible using the all-access EZ-Charge Card. They will be included in Nissan's "No Charge to Charge" program, which offers two years of no-cost public charging at select local stations with the purchase or lease of a new LEAF. More information on EZ-Charge and "No Charge to Charge" is available at ez-charge.com."

"I want to congratulate Bellevue Nissan on its expansion and for creating Washington's first electric vehicle charging depot. These fast-charging stations are the backbone of our future transportation infrastructure. Electric vehicles will help us clean our air, create more jobs and reduce our dependence on foreign oil. I've charted a course for action to grow the number of electric vehicles in Washington State from 10,000 on the road today, to 50,000 by 2020. Increased sales of electric cars and creating the charging infrastructure to support them, like what we're seeing here in Bellevue, will help us meet that goal."

"Since the all-electric LEAF went on sale in late 2010, we have been one of Nissan's top LEAF dealers. Now, we are leading the country in providing a fast-charging depot for those customers and other EV owners."

"Nissan is committed to doubling the number of quick chargers in the U.S. by next April, and we applaud Bellevue Nissan for installing this charging depot for LEAF drivers in the Seattle area. Bellevue Nissan is adding to the established infrastructure in the northwest to make driving an EV even more convenient and rewarding."

"NRG eVgo is proud to work with Nissan to expand the availability of fast charging in Washington State. Fast-charging depots like this one, plus additional capability around the city, will give EV drivers the convenience they need to drive electric."

Check out this video, via Nissan LEAF owner Trish Haveman, from the scene showing Governor Inslee conducting the gas hose cutting as part of the opening ceremonies:

And here's video from the scene showing the chargers:

And one last video that captures the majority of the event:
++