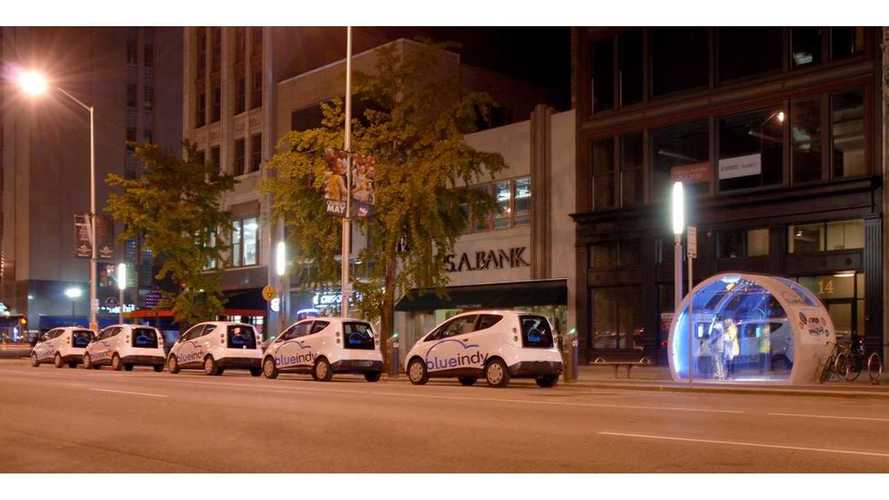 BlueIndy car sharing service in Indianapolis was stuck a few months ago, as there was no agreement on financing the project.

The plan to finance the infrastructure through raising electric rates in the area did not work.

"BlueIndy has been in limbo since February, when the Indiana Utility Regulatory Commission denied a request by the city to raise electric rates so that Indianapolis Power & Light Co. could pay for 200 charging stations.

The IURC said it was unfair to charge all customers for a service that only a small percentage would use."

But Mayor Greg Ballard was still seeking a solution and found spare coins in parking meters.

The new plan is to build 12 stations with 5 charging bays each for $13 million. Half of the cost would be covered from parking meter revenues (over $6 million) and the rest by French company Bollore.

Well, there is never enough money in the city for all needs, so as one could expect we are not sure if this will pass:

"The city will pour more than $6 million from parking meter revenues to help construct charging stations and Bolloré, the company that owns the service, will pitch in another $6 million, bringing the company's commitment to more than $40 million

But the deal has angered a council leader, who said the administration of Mayor Greg Ballard is inappropriately using targeted infrastructure dollars for a "boondoggle."

"This is outrageous, this is the second time he's done this," said Public Works Committee Chairman Zach Adamson, referring to Ballard's spending $5 million in infrastructure money on an Eastside sports and cricket complex. "How are we supposed to work with a Public Works Department that goes around the council?"

Adamson said parking meter dollars can be used only for infrastructure improvements in metered zones and said electric cars don't count as infrastructure.

"We have a billion dollars in infrastructure needs in this city and we are spending money on this?" he said.

Adamson said his committee had already approved a list of specific projects — like curb repairs — that now, presumably, won't get done because money is being diverted to the electric car program.

Council Chief Financial Officer Bart Brown said the administration seems to be legally entitled to shuffle the money but "they are stretching it."

In theory, construction of 12 stations will begin in May or maybe June with launch of BlueIndy this summer.

Here is the not yet approved list of stations: