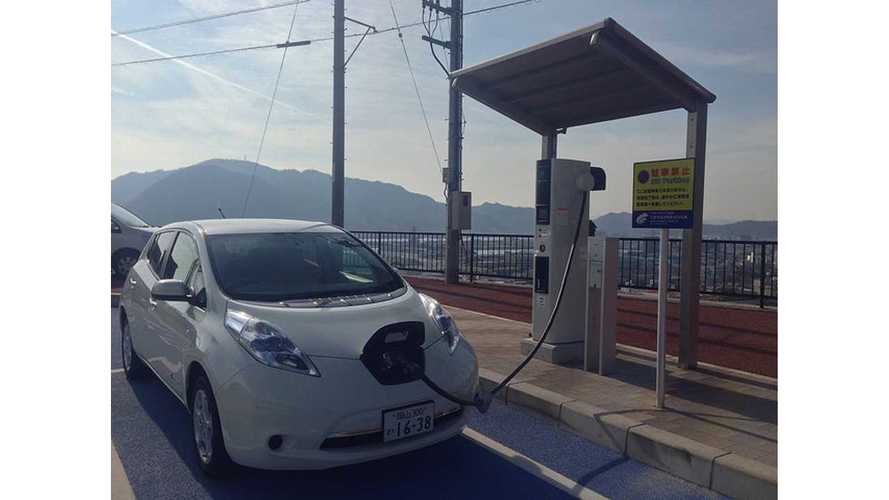 At the UN Conference on Disaster Risk Reduction, Nissan highlighted how electric cars can play a key role after disasters.

Japan already had a chance to use EVs in this way four years ago when and earthquake and a tsunami struck the northeastern part of the country:

"On March 11, 2011, a magnitude-9 earthquake shook northeastern Japan, triggering a tsunami that reached heights of up to 40.5 meters and travelled up to 10 km inland.

The earthquake had been the strongest ever recorded in Japan, and the ensuing devastation had no parallel in the quake-plagued nation’s modern history. With thousands dead and missing, Japanese society took up the recovery effort.

Nissan, along with other major Japanese automakers, sent assistance to affected areas while trying to recover from the damage to its own factories and dealers.

Despite the damage incurred, electric power in the hard-hit areas in northeastern Japan was quickly restored, but with six out of nine refineries down and pipelines disrupted, supplies of gasoline were dangerously low."

Electricity almost always comes back first is such situations, while most other things get put in the long queue (including gasoline).

Electric cars can not only drive, but power external devices too. The new Nissan e-NV200 in Japan is equipped with two external outlets, although for sure it would be hugely beneficial for it to have larger battery packs.

"After the disaster struck, Nissan received a call from Naoko Iwanaga, a Yomiuri Press reporter who was in contact with affected businesses in Sendai. Iwanaga-said an outpatient clinic in Miyagi could not reach its patients due to a lack of gasoline.

A LEAF that the Sendai Oshin medical clinic had already rented was performing well, but additional assistance was needed, so another LEAF was sent to the clinic from a local dealer a couple of days later.

The two LEAFs were used to deliver medical treatment to 20 to 30 patients per day, most of whom were suffering from cancer. These treatments helped patients with respiratory conditions, transporting the oxygen inhalation equipment they desperately needed.

These mobile medics often drove 60 to 70 km per day over the area’s mountainous roads in order to reach patients. The LEAFs stood up to the challenge, allowing critical services to be delivered even in the midst of disaster.

The two battery-electric LEAFs operated by the Sendai Oshin Clinic were the first of a total of 65 loaned to the relief effort. Operated by nonprofit organizations, NGOs, and local authorities, the LEAFS silently worked side-by-side with 50 Nissan Patrol SUVs, vehicles more traditionally associated with rescue efforts.

Even during the darkest days of rolling blackouts, the LEAFs kept rolling. Blackouts typically occurred during the day, while the LEAFs were on the road.

When power came back on in the evening, the LEAFs could charge up for another day of helping people get through the worst.

After the Great East Japan earthquake, 80 percent of the electrical power in the affected areas was restored within three days. During that time, the battery in a Nissan LEAF could provide light, keep cellphones charged and the radio on. Restoration of the supply of water, gas, and gasoline would take much longer than a few days.

After the immediate crisis in Sendai had passed, the 65 disaster-tested LEAFs were made available to local authorities. They carried help to shelters in Miyagi, brought goods to distribution points in Iwate and were deployed as coordination vehicles in Miyagi and Fukushima.

In later days; the cars were loaned to media to enable disaster aftermath coverage in the affected areas."

The last video confirms that electricity came back first also in the US, when super storm Sandy hit the East Coast.

"Vehicle owners in New York and New Jersey have been struggling to find gasoline since super storm Sandy hit the East Coast. But people with fully electric vehicles like the Nissan LEAF are having an easier time charging up and getting to where they need to go."