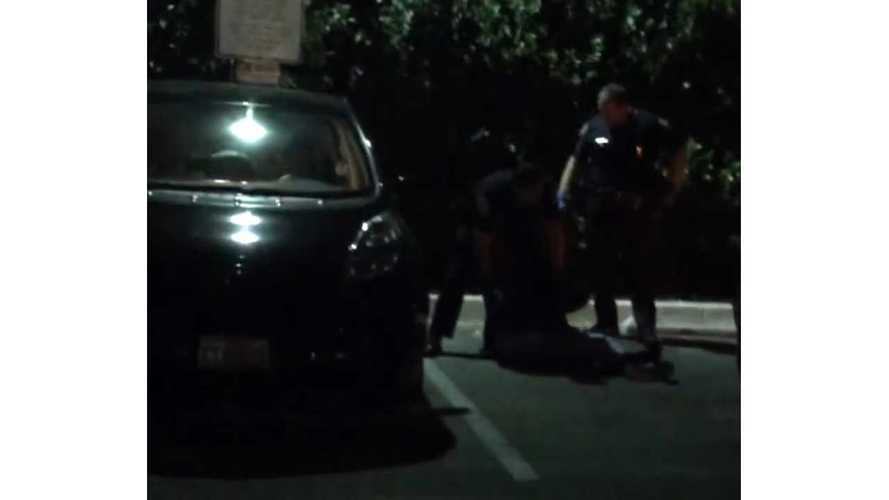 According to the Santa Monica Daily Press, "A Santa Monica man was arrested on April 21 while attempting to charge his electric vehicle, and the incident is sparking discussions of racial profiling and the use of force that mirror the current national debate."

*Editor's note: Any and all racial comments will be deleted

Here are the facts...

Justin Leland Palmer, a Nissan LEAF owner with no criminal history, was "at the Virginia Avenue Park electric car charging station on the evening of April 21. He was asked to leave the charging station by police, he refused, he was asked for his identification, he refused, he was then tackled to the ground, pepper-sprayed and arrested," according to the Santa Monica Daily Press.

But details and specifics are under dispute.

The Santa Monica Daily Press contacted Sgt. Rudy Camarena, who says that "officers were making a routine check of the park as part of their patrol. The park closes at 11 p.m., but the electric vehicle charging stations close at 8 p.m."  Upon obtaining public records, the Santa Monica Daily Press concludes that officers registered as being "at the park at about 10:54 p.m."

Camarena instructed several others at the park, some of whom were charging electric cars, that the park was closing and that the charging stations operating hours were over.  Presumably, the others who were contacted obeyed the officer's request to unplug and leave the park, but not Palmer:

"Camarena said when contacted, Palmer refused to leave the charging station and after making multiple requests for him to leave, officers decided to issue Palmer a citation. Palmer refused to provide his identification as part of the citation process, at which point officers decided to make an arrest for obstructing an officer and violating the posted hours of the park."

Palmer "actively resisted" arrest, according to a statement issued by the Santa Monica Police Department:

Palmer would not comment.  Instead, he directed questions to his attorney, Justin H. Sanders, a Partner with Sanders, Roberts & Jewett.

The attorney tells the story, via the Santa Monica Daily Press, like this:

According to Sanders, Palmer routinely uses the charging stations at the park. On April 21, he said, Palmer entered the park at about 9:30 p.m. and found all the charging bays in use. He waited in his car until about 10:30 p.m. when a charger became available. Palmer drove from one side of the parking lot to the now-open charging station, where officers contacted him.

Sanders described the officers’ behavior as “aggressive” from the start and said his client was singled out for police contact despite the presence of other people using the park and charging vehicles. He said when Palmer asked officers to explain why he was being prohibited from using the stations, the officers demanded to see identification. Palmer questioned why his identification was needed, as he felt he had done nothing wrong, and it was at that point he was arrested. According to Sanders, the arresting officer cuffed Palmer’s hands behind his back, swept his legs from under him and took him to the ground. While on the ground, Sanders said, a second officer used pepper spray on Palmer.

Part of the event was captured on video, embedded below:

Stop the InjusticeFather of 4 tries to charge electric car and gets beat up by police, pepper sprayed & arrested.

Palmer's court hearing is scheduled for May 22.

The police department is asking that witnesses with additional info contact Captain Wendell Shirley from the Operations Division at (310) 458-8952.

Officers claim they "tried to de-escalate the situation,” while Palmer's attorney is confident that "witnesses and record of the events will exonerate his client of any wrongdoing," according to the Santa Monica Daily Press.

As of press time, no official complaint had been filed by Palmer against the police department.