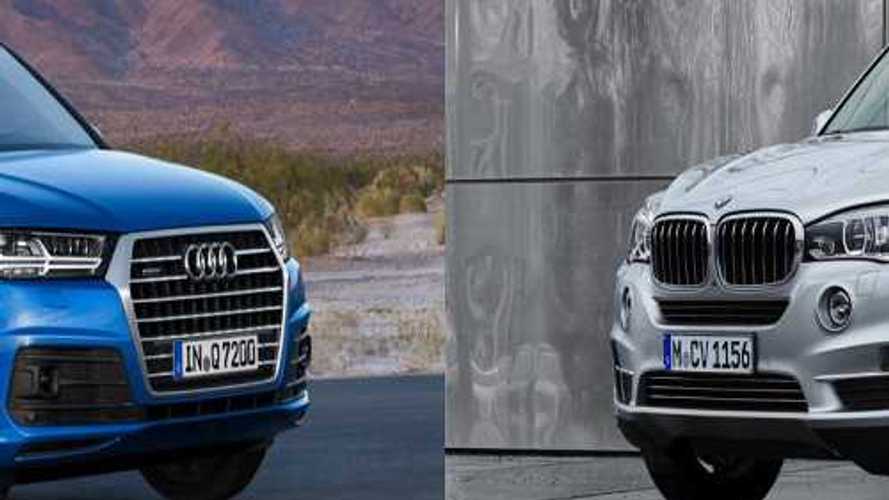 BMW just took the wrapping off of its newest X5 for the whole world to see; the BMW X5 xDrive40e, the very first plug-in hybrid X5. It’s truly remarkable, what BMW’s been able to do with this X5. With a 2.0 liter turbocharged four-cylinder and a synchronous electric motor, combining to make 309 hp, can surge the X5 hybrid to 60 mph in 6.8 seconds and get around 70 mpg. It can also run in pure electric mode for 19 miles and hit up to 75 mph.

Editor's note: BMW USA just released us specs/trims for the X5 xdrive40e (full details here).  For America the plug-in SUV is rated at 55 MPGe, with an all-electric EPA estimated range of 13 miles.  The electric BMW arrives in us showrooms this fall.

Mighty impressive stats, and promising for the future of the brand. BMW says it would like to make a plug-in hybrid version of each of its cars in the future. If that’s the case, the X5 xDrive40e is a good place to start.

In Ingolstadt, it seems a contender is in the works. Audi is creating its own plug-in hybrid SUV in the Q7 e-tron. However, the e-tron has a bit of a twist on the formula as it uses a diesel (gas in U.S. and China) engine to pair with the electric motor. A 3.0 turbo-diesel V6 will pair with the electric motor to create a combined power rating of 373 hp and 516 lb-ft of torque. Or enough to pull planets out of orbit if need be.

*Editor's Note: This post also appears on BMWBLOG. Check it out here.

It also gets a claimed 138 mpg and can do 34 miles on just the batteries alone. According to Audi, when combined with the engine and fully charged battery, the Q7 e-tron can get 876 miles to a single tank. Impressive numbers indeed.

It’s tough to say which will be better. Obviously we won’t know until both are driven, but it’s going to be close. The X5 is a genuinely impressive machine, with a stat sheet that hurts the brain because of the sheer amount of impressive numbers. On the flip side, the Q7 e-tron’s use of a diesel engine optimizes the performance and efficiency of the powertrain.

It’s going to be very interesting, in the coming months, to see which is superior. Will BMW’s knowledge gained from the i8 deliver a superior product? Is the V6 diesel from Audi a better choice? BMW seems to be the best at plug-in hybrid technology at the moment, but only hands-on drives will be able to determine the victor.

Regardless, though, the future looks bright.