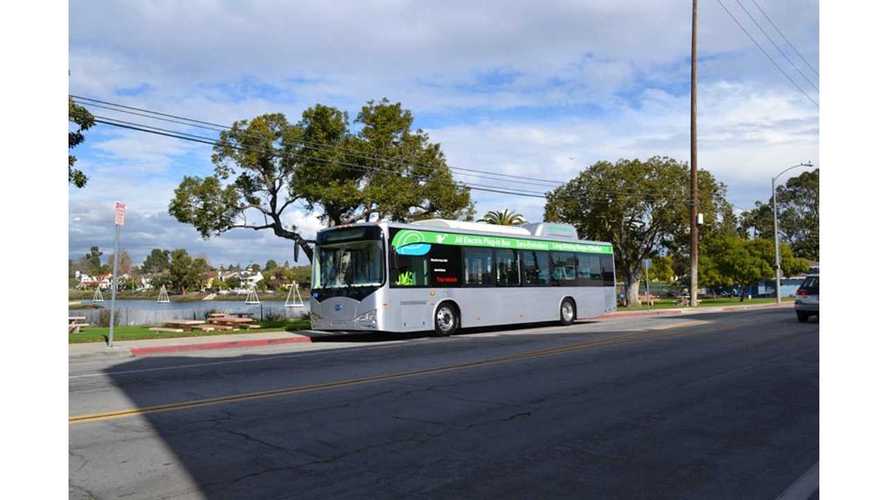 BYD returns to the game in Long Beach as electric bus supplier after an unfortunate first tender.

The Chinese company already won an order for 10 electric buses, but at the time a formal problem blocked federal grant money and the contract was mutually terminated.

It seems that BYD Motors sorted out all the paper work and the Lancaster, CA factory will get the job for these 10 electric buses, after BYD secured the new order.

The buses will be used on the Passport route in downtown Long Beach.

"On April 27, 2015, the Long Beach Transit (LBT) Board of Directors authorized Kenneth McDonald, LBT President and CEO, to enter into a contract with Los Angeles-based company BYD Motors, Inc. for the purchase of 10 battery electric buses and supporting charging systems. The LBT Board approved up to $11,069,319 which also includes training and required equipment in support of the purchase.

The LBT Staff recommendation was the culmination and conclusion of a competitive bidding process that included the issuing of a detailed Request For Proposals (RFP) on September 23, 2014.BYD Motors’ response to the RFP deemed most responsive and responsible and met the requirements outlined in the request."

"As a major benefit to Long Beach Transit, BYD Motors offered a 12-year warranty on major components of the propulsion system, including the battery. Twelve years is considered the useful life of a public transit bus, and is the minimum time the Federal Transit Administration expects a transit agency to maintain a bus."

“The Long Beach Transit Board made a historic decision today that will not only benefit our customers, but will also be a win for our community. Our new battery electric buses will be zero-emission. This is the cleanest bus we have offered to date, and it’s the leading edge of technology in the industry. We are happy to be working with BYD Motors to bring our most eco-friendly transit vehicle option to Long Beach.”