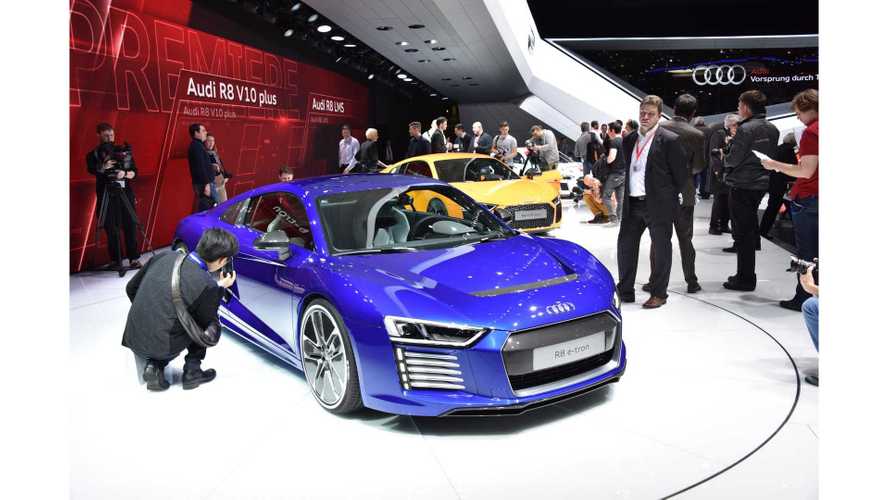 Autocar is one of the first publications to test drive the 2015 Audi R8 e-tron prototype that was unveiled in Geneva.

One of the first things that conspicuous inside is a big red button within the center console to activate a sound generator of the 5.2-liter V10 direct-injection gas engine from the R8!

There is also a 6.8-inch AMOLED monitor in place of a rear-view mirror - good to have as rear window is blanked off.

Enlarged battery capacity stands at approximately 91-92 kWh, enough to go 450 km onn NEDC (280 miles). According to Autocar, after 143 miles of testing in the city, the car showed 70 miles remaining.

Interesting is that Audi choose to go Tesla's way with 18650 lithium-ion battery cells using 7,488 of them in 52 modules.

"There is an agreeable amount of feedback from the electro-mechanical steering system and superb traction thanks to the use of a torque vectoring system, that splits the drive between the individual rear wheels. The handling is satisfyingly neutral, too.

The R8 e-tron corners eagerly with responsive turn-in traits, impressive grip and outstanding body control. Predictably, given the car's weight, the ride is rather firm. However, there is sufficient wheel travel to ensure it never feels uncomfortable."

"On a run of 143 miles over urban streets, secondary roads and motorways, we used just three-quarters of the available electricity, averaging 19.9kWh per 100km (62 miles). At the end of the journey the range-to-empty readout was showing 70.2 miles, suggesting Audi’s revised 249-280 miles range claim is within reach."