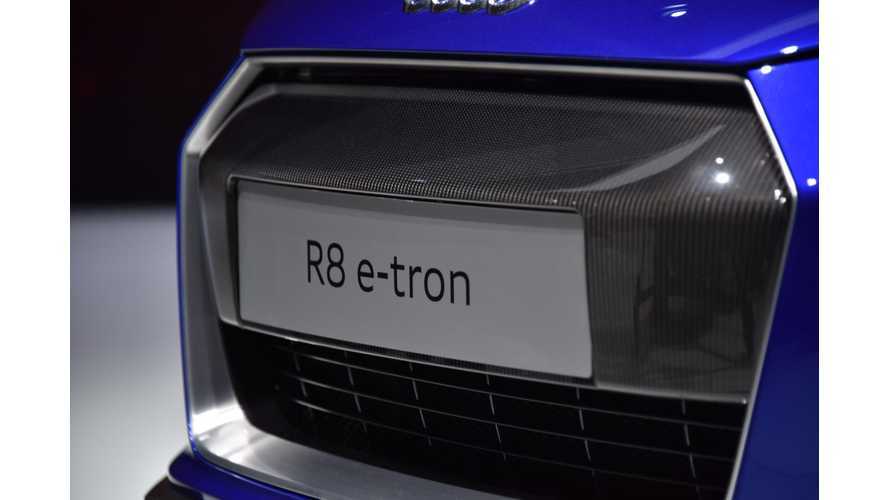 Professor Ulrich Hackenberg, Member of the Board of Management at Audi AG for Technical Development, spoke at the automaker's recent annual press conference.  Much of his speech focused on plug-in electric cars.  Here's that portion of his speech verbatim:

Plug-in hybrids, natural gas and battery-electric drive systems have a key role to play in achieving CO2 targets. The Audi A3 e-tron* as a plug-in hybrid and the Audi A3 g-tron* powered by natural gas were successfully launched on the market in 2014. Both of them already have successors: the electrified Audi Q7 and the future Audi A4 g-tron based on the second generation of the modular longitudinal platform (MLB 2). We plan to have a plug-in hybrid in every model series in the coming years.

In 2014, we announced that we will produce our sportiest ambassador for electric mobility, the Audi R8 e-tron, to customer order in a tailor-made manufacturing process. The time has come.

Its range is a good 450 kilometers in the fuel-consumption cycle. With its efficient drivetrain, the Audi R8 e-tron offers competitive and customer-focused long-range electric mobility. We have redesigned the battery’s technology from its ground and achieved a new level of performance and energy density.

Its fluid-cooled lithium-ion battery has a capacity of more than 90 kWh and is integrated into the Audi Space Frame structure of the car. We manufacture this battery at the Audi center of excellence for battery technology in the Ingolstadt area. This is a great proof for the engineering power of Audi. In addition, the Audi R8 e-tron continues to be our technology carrier for future electric cars.

In early 2018, we will launch a battery-powered sports activity vehicle in the large premium segment with a range of more than 500 kilometers. It will have a new, very attractive design, which we are developing especially for the e-tron range and for battery-electric vehicles. This sports activity vehicle will be built on the second generation of the modular longitudinal platform. From the very beginning, this tool for optimal drivetrain diversity implementation has been designed for a broad variety of concepts.

As an alternative to battery-electric drivetrains and with regard to the future of the automobile, we presented our concept for fuel-cell technology in November 2014. On board of a fuel-cell powered car, electric energy is generated by a synthesis of hydrogen and oxygen. In our Audi A7 h-tron quattro technology carrier, we demonstrated the viability of this concept. And, this technology is ready for series development. Only four weeks ago, we acquired a number of strategically important patents from Ballard Power Systems, Inc., a global leader in fuel cell technology. This will further strengthen both our broad patent portfolio and our competitive advantage in terms of fuel cell technology development.