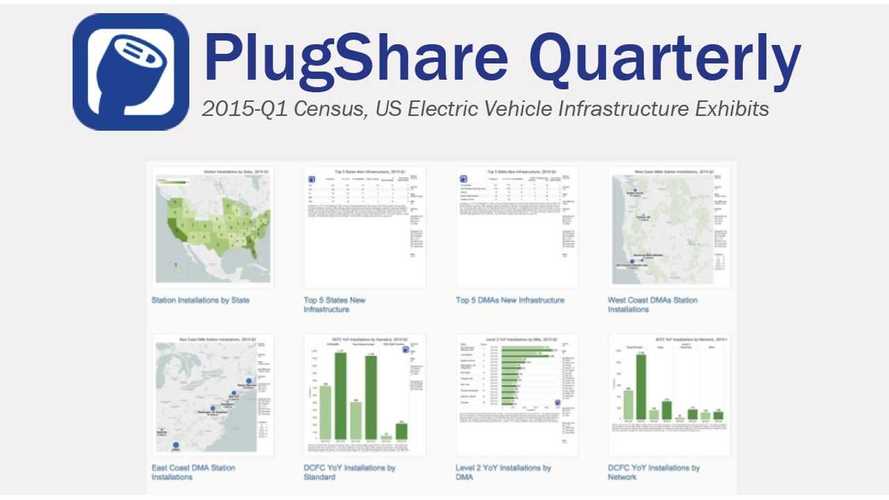 Most everyone is familiar with PlugShare, more specifically its free application to find charging stations (and also peruse users reviews of them), for smart phones and the web.

In total more than 150,000 plug-in drivers have used the service and the PlugShare database lists more than 30,000 public stations.

We were fortunate to both get a quick synopsis of the program from a PlugShare representative, but also a sneak look at some of the detailed, not seen before information contained in the first edition, Q1 2015 report; such as 63.3% of the public charging infrastructure today in the US is free.

"PlugShare is releasing a new product on Friday (April 24th, 2015) called PlugShare Quarterly. The Quarterly is a chart gallery released once a quarter that delivers high-level insights about the trajectory of our country's EV charging infrastructure.

We produced the Quarterly using the PlugShare Data On-Demand service we recently released, but the Quarterly is really intended for the general EV industry stakeholder audience including utilities, charging networks, automakers, cities, non-profits, and other organizations.

The Quarterly will be available for purchase for $2500 as a PDF with 16 reports accompanied by a brief annotation that explains the contents of each report. It will be hosted on the PlugShare Company website through the PlugShare Data subpage, which is located here. "

Our thanks to PlugShare for some of the most thorough data on the U.S. charging infrastructure that we have seen to date.

New Q1 Charging Infrastructure By State - Or Perhaps A Good Reason To Still Not Attempt To Take Your EV On A Family Trip To Saskatchewan, Canada (click to enlarge)