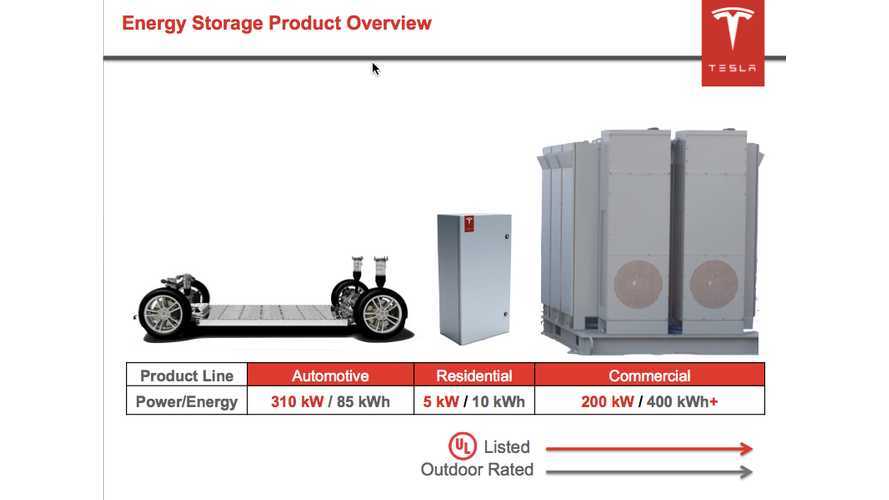 In a story dated April 22nd, Bloomberg headlined "Tesla Wants to Power Wal-Mart".  Of course, this got picked up by just about every "mainstream" news source, because...  why?  Oh right - next week, as we reported, Tesla's got a big unveil of it's Home/Utility Battery product.  And they had to headline with something.

The Bloomberg piece reads like a series of tweets with a little embellishment - and may well be, but it does cover a lot of the salient points however superficially, and everyone's acting like Wal-Mart is breaking news.  Solar City, in conjunction with Tesla, started a pilot program with Wal-Mart in 2010 and expanded the program in 2012, with Tesla-branded storage.  Granted, this "news" may be simply confirming that the pilot period is over, and the real program and agreements will begin.

The fact is, this has been percolating for quite some time now.  We're anticipating a more sophisticated, more integrated, "smarter" system than we've seen before, with slick packaging (with self-actuating handles, perhaps?), from Musk's comments back in February of this year:

“We are trying to figure out what would be a cool stationary pack,” Musk said. “Some will be like the Model S pack: something flat, 5 inches off the wall, wall-mounted, with a beautiful cover, an integrated bi-directional inverter, and plug and play.”

A story in the San Francisco Business Journal speculates that Tesla is "bullish on storage" because of $65 million in rebates, a stock boost and the solar connection with Solar City (which, on Earth Day announced a new, $1 billion fund for commercial solar projects - 300 megawatts of energy over the next two years).  On the Solar City press page, you can read all about the Solar City/Wal-Mart projects here, dated last November.

One of the more interesting stories spinning off of the Bloomberg piece is from the LA Times, where we're reminded that in December, this plan was outlined by Mateo Jaramillo, Director of Powertrain Business Development at Tesla.  From that story:

In December, the PUC held a workshop to craft energy storage and interconnection rules. One of the panelists was Mateo Jaramillo, director of powertrain business development at Tesla Motors. Another was Ryan Hanley, director of grid engineering solutions at SolarCity.

He discussed the differing requirements among major utilities for telemetry requirements — the way large battery storage systems communicate with the grid to prevent power surges and gaps — and suggested low-cost options.

Baumhefner said, “Tesla is looking to get into energy storage whether it is on four wheels or stationary.”

Storage, as we know, has a huge potential - from a 2013 $4.3 billion to an estimated $19.9 billion in 2020, according to Navigant Research.  The LA Times story points out that BMW sees potential in storage as well, with pilot programs in California.

Of course, we all know that this Solar City storage thing started back in 2010 with a grant for $1.7 million in conjunction with Tesla and UC Berkley:

SolarCity, a national leader in solar financing, design, installation, monitoring and related services, today announced it will receive $800,000 as part of a grant in the second round of funding by from the California Public Utilities Commission (CPUC) for the California Solar Initiative (CSI) Research Development, Deployment and Demonstration (CSI RD&D) Program. SolarCity is teaming with Tesla Motors and the University of California, Berkeley, which will receive an additional $900,000, to research advanced grid-interactive distributed photovoltaic (PV) and storage.

...and lest we forget, the Motley Fool points out that, unlike Tesla, SpaceX and just about everything else Musk has put his hand to, this isn't a market that's devoid of some major competition.  GE, worth some $270 billion, has been playing in this arena for a while now, and isn't rolling over to the upstart car company any time soon:

...last week, GE announced a reentry into energy storage: It plans to supply utility Consolidated Edison's subsidiary, Con Edison Development, with an 8 MWh battery energy storage system in Central Valley, California. While an energy announcement like this would be news in and of itself, it seems that General Electric's latest move will put it in direct competition with Tesla Motors Inc: This will be GE's first foray into lithium-ion batteries.

For Consolidated Edison, it's easy enough to understand why General Electric Company would be a natural partner. "We have a history of working with GE in thermal and wind, and we are pleased to continue our long-standing collaboration into the evolving world of energy storage," said Mark Noyes, Senior Vice President and Chief Operating Officer of Con Edison Development, in a statement. "GE brings a strong technical solution, along with performance guarantees."

While that's a microscopic effort compared to Tesla (the Fool reckons " this GE system will equate to just 0.002% of Tesla's annual production"), Tesla has to be feeling like they're tossing rocks at the lions, (from inside the cage) to some degree.  Of course, with his SpaceX handling of NASA and Boeing as reference, we're thinking this might be just where Musk wants to be. As the Fool sagely advises, the storage war has just started:

The current energy storage market is worth a tiny $130 million, but analysts expect this business to boom to $1.5 billion by 2019. That's almost half of Tesla Motors Inc's 2014 revenue and a not-insignificant 1% of giant General Electric's. This latest news sets into motion what we've known all along: The energy storage war is from over, and investors will need to watch closely as the battery battles heat up.

...and before you jump to "...but no solar", take a look at the whole site.  Solar, wind, storage, residential, telecom, commercial...  even mention of EV charging.