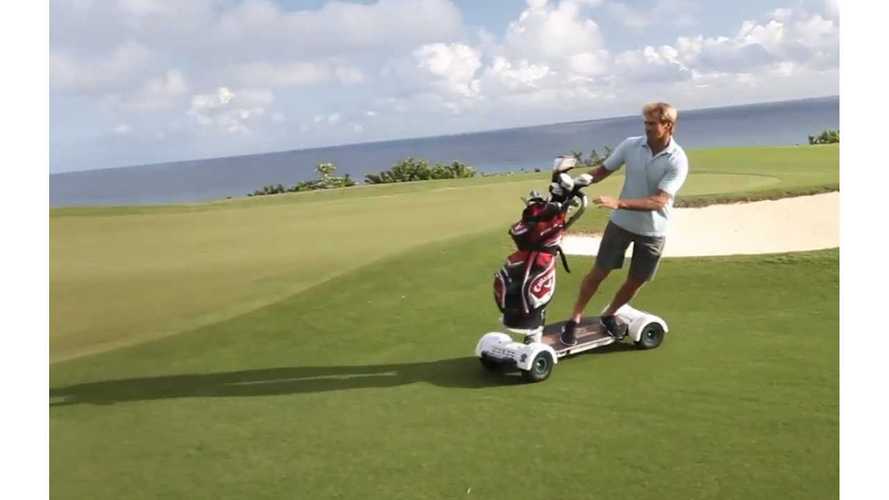 This may not really fit into the "Silly Scooter" category, though it's kind of silly, and it's definitely a scooter.  It's also a little bit old news, but the PGA Merchandise show is nothing to sniff at - first, we all know golfers will buy almost anything to support their habit in whatever way they see fit, and second, there are a ton of products shown at the show - the fact this thing got first place last year?  It's a big deal. We found this through the FOX 12 Oregon Facebook page's video spot, here, and looked into it a little further.  This is the Golfboard.

Golfboard's target market: the 20-something golfer

First, let's look at the specs.  This is a four-wheel-drive skateboard/snowboard style ride, with a flexible deck and two gear-drive motors, with what they're calling "posi-traction".  The board is set up to lock the wheels when stopped, so it won't wander off unattended.

Housed on each end of the board are industrial grade gear boxes which provide power to all 4 wheels reliably and evenly. This never before seen feature of a powered golf device insures safety, smooth operation, and nearly zero maintenance requirements. Four-wheel-drive traction is guaranteed to provide solid transport even on the steepest hills.

It's running 4" wide "turf tires", and lithium batteries "found in the latest luxury electric automobiles".  mmmm.  Panasonic, perhaps?  It has a range of 18 holes of play (which is a big range, depending on how good a golfer you are), and recharges in an hour.  It steers like a snowboard, and has a "unique" steering damper to prevent high-speed wobbles.  Top speed is something like 10-14mph, depending on the model.  The price?  $6,500.00.

They're aiming this at courses for fleet sales, but they'll also sell them to individuals.  Want to try one out?  They have a map of courses that have them on their site, and, even if you live in Hawaii, you're in luck - it looks like the PGA "win" did the trick.

There's no shortage of videos on their site, and their YouTube channel, but here's an interesting testimonial from Tehterow Golf Course: "We don't want to be your grandfather's golf course..."

Here's their feature video, showing an idea of what the course might look like with a flock of Golfboards on it:

As they describe on the site, the product was put together by an interesting mix of "all-star" talent:

...The concept of a GolfBoard was formulated when self-described snowboard addict Don Wildman, founder of Bally Total Fitness, had the original idea to use an electric skateboard to ride the steep slopes of his local Malibu course as a fun way to ‘get in some turns’ during the summer months. But as much as he tried, an off-the-shelf, one wheel drive skateboard wasn’t safe or powerful enough for some of the steeper fairways.

As fate would have it, Wildman had the good fortune to befriend surfing legend Laird Hamilton while on a visit to Hawaii. A periodic golf partner to the Wildman when the ocean is too calm for surfing, Hamilton was interested in the concept and wanted to see this idea progress. Enter EV entrepreneur Star Faraon, a surfing friend of Hamilton’s who happened to have been forging the concept for an all-purpose and high performance electric mountain board.

The recurring theme here is the speed of play.  It's no mystery that courses need to move as many players through the course as possible in the shortest amount of time, and "cart only" courses that prohibit walking are becoming more common every year.  The Golfboard moves the players even faster - each player follows their own ball.  We're hearing repeated comments that an average 4-hour round of play is just too much time.

As far as our thoughts go, we are just going to keep that to ourselves.  Walking a course for an 18-hole, 4-hour "round of play"?  It's kind of what we're there for in the first place, personal conveyance machines be damned.

And before you make up your mind that this is the best business plan of the decade, you should know it's been tried before.  Seg-Golf, anyone?