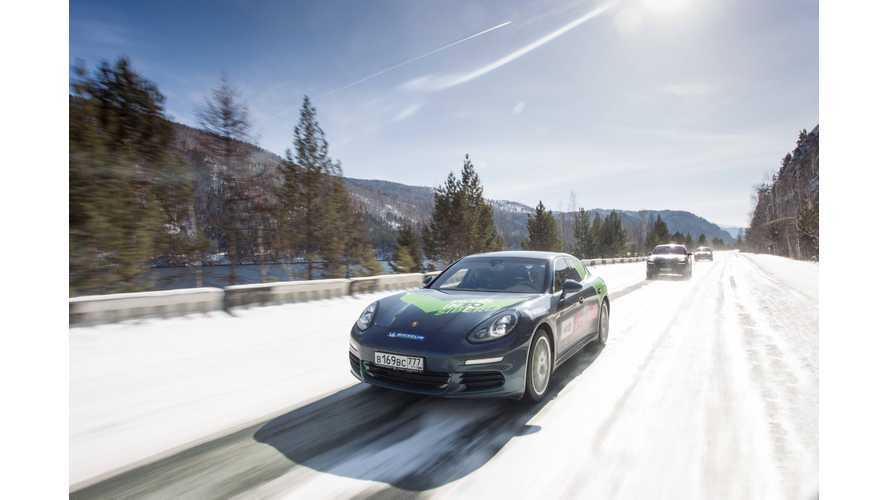 Porsche sent its plug-in electric cars to Siberia in an epic "Plug in to Siberia" adventure with a group of journalists behind the wheels.

It seems the goal is to discover if the plug-ins can withstand the brutal Russian winter.

The plug-in electric cars have already covered more than half the distance of over 7,000 km from Irkutsk to Ekaterinburg.  The journey should take 12 days in total (almost 600 km a day).

The plug-in Porsches are covering ground at a rapid pace ... although we are not sure if there's been any opportunity to to plug-in the Cayenne S E-Hybrid and Panamera S E-Hybrid for charging.

"Organised by Porsche Russland, the aim of the expedition is to show how well the cars can adapt to the peculiarities of the Siberian weather, and landscape. Along the way they will pass through Novosibirsk, Tobolsk and UNESCO World Heritage Sites such as the Stolby Nature Sanctuary.

Dubbed 'Plug in to Siberia', the trip sees the group driving the world's first luxury electric Porsche Panamera, as well as the Porsche Cayenne SUV.

Porsche Panamera is kitted out with Michelin studless tyres, specially designed for powerful high-performance cars. The main advantages are to reduce braking distances on wet and snowy surfaces and give rapid acceleration on the snow and ice, as well as improved handling on winter roads – perfect for the Siberian climate."