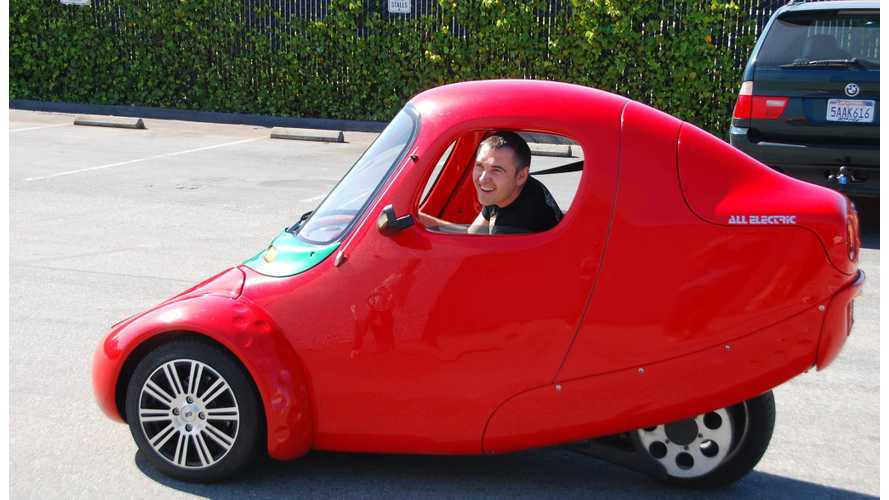 EMotorWerks, founded in 2010, to date has sold more than 3,000 JuiceBox charging stations, but CEO Val Miftakhov seeks other business models than selling hardware (at least to some degree).

As it turns out, the JuiceBox ATM (right) unveiled on April 1, which gives us a chance to withdraw money every charge was mostly just a joke, but there's a way that a charging station pays you, or pays for itself at least.

The new-old idea to earn money is to implement smart charging controlled by utilities.

It could work like this - you get a FREE JuiceBox for your EV, but the utility will decides whether to charge now or later (or stop charging for a while) based on data on electricity demand, available renewable power sources and time to finish charging.

Utilities have interest managing resources in this situation.

In theory, the charging station would be paid off over lifetime by the utility. For now, base models cost less than $400.

Will EV owners choose free charging stations, but with some limits on usage? Will implementation be possible at a large scale? Is this commercially viable.

More on the concept we find here from an interview on Greentech Media:

“We’re trying to qualify all the revenue streams that would be open to a player like us,” Miftakhov said. “Once someone buys an EV, it becomes the largest load in their household by far -- and it’s purely time-shiftable, with a few exceptions.”

JuiceBox owners don’t have to do much besides agree to let EMotorWerks alter their charge rates within a certain multi-hour timeframe, he said. A simple slider bar on their iPhone or Android app allows them to say by what hour they need their car battery to be fully charged. Within that window, “on a statistical basis, you can be pretty sure, 95 to 99 percent sure, what your capacity is going to be,” he said. “That’s what you commit to the market.”

For now, there is a pilot project ongoing in California that was launched together with Ohmconnect in March:

As many of our supporters know very well, Electric Motor Werks team is working hard with CPUC and the three largest utilities in California on a revolutionary PEV Submetering pilot.

It has been a lot of hard work over the last few months to satisfy all the requirements of the Utilities and two weeks ago we finally had the submeter design and construction approved by PG&E (see our previous news post about this).

The submeter connection to our servers has been completed this Sunday March 8 and submetering data will be transmitted from EMotorWerks / OhmConnect servers to PG&E starting March 11.

This marks an important milestone for the company and the advancement of EV-Grid integration in the State of California. Togeher, we are making driving EVs more affordable for all future drivers by enabling time-of-use EV rates without the expense of a separate utility meter and panel.

We are looking forward to deploying the network of our submeters and submetered charging stations through the state and broader US markets. "

EMotorWerks CEO Val Miftakhov ends the interview with this statement:

“I feel we can extract the value and we can bank on it. Once we have statistically significant proof of the revenues generated through these models, there will be financing players willing to capitalize” the equipment.

EMotorWerks has raised an undisclosed amount of seed funding and institutional investment, and “we are preparing for raising a Series A soon. We have the system built out; we have the pilots already that are utilizing all these capabilities. We need to bring it to the next level. We need thousands of devices to be under control for a certain period of time to gather significant data.”