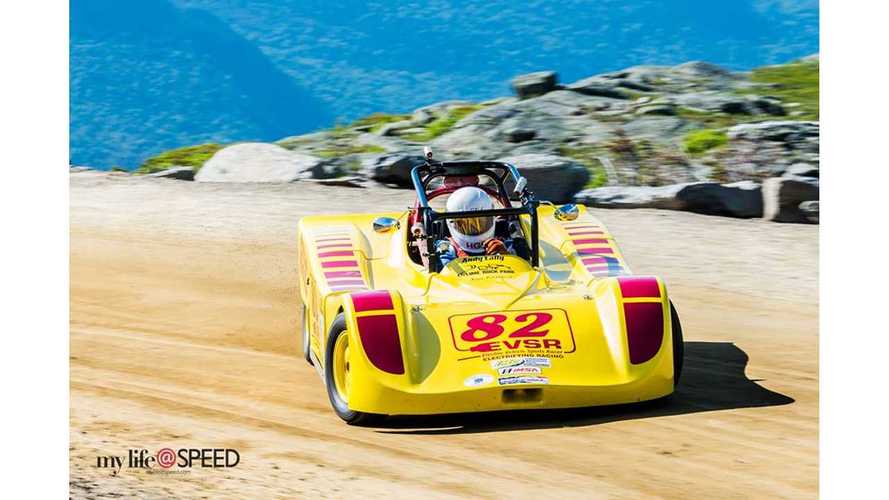 A little closer look at the roster on the Pikes Peak competitor list, and we noticed Entropy Racing's EVSR team was not only signed up, but fielding three cars for the 2015 race.  Apparently, the boys have been hard at work over the winter prepping a third car for their 2015 campaigns, based in the back yard of the exceptionally green-focused Pocono Raceway.

EVSR works closely with some legendary drivers, among them, Tim O'Neil with pages of accolades to his resumé, and his most recent record on the Mt. Washington "Climb to the Clouds" (a steeper and more technical road than Pikes Peak, and also, interestingly, predating the Pikes race by several years.)

EVSR's Charlie Greenhaus told us about the team's 2014 season:

“Last year we entered into the future of motorsports and electrified racing with EVSRs, our 100% electric racecars, which have since proven themselves over and over.

We've competed against gas-powered racecars, set records everywhere we went, and impressed many. In fact, EVSR has the longest competition range of any electric race car in the world.

EVSR has raced in over 30 events in every form of motorsports from road races to hill climbs, auto cross, and drag racing."

Entropy Racing began sports car racing in 1989 and began renting cars to clients in 1991. They've been a leader in club racing services for over two decades, and provide services from car prep and delivery to rental race cars, coaching, event management services, and fabrication.  In short, just about everything else a club racer could need.  In the last few years, Entropy made the decision to commit to developing a fleet of electric race cars, and dubbed that EVSR. Read more on EVSR here.

Looking again at the electric car roster for Pikes this year, we can't help but notice a pointed absence - Mitsubishi, whose MiEV Evolution III piloted by Greg Tracy "obliterated" the PPIHC EV record time, by a good 30 seconds is not registered - at this point, anyway.  Either Greenhaus has a relatively open field, and will place well without Mitsubishi there, or, they may be hammered - by the best.  No shame in that, either.

Greenhaus and EVSR will hasten to add, they've launched a crowdfunding campaign to help fund the Pikes effort.  For more information on that and the full video of the record-setting Mt Washington Climb to the Clouds run, check out Electrify Pikes Peak! on IndiGoGo.

For a look back at the 2014 season, check out this video: