Cadillac CT6 PHEV Debuts In Shanghai, Gets 37 Miles Of Range 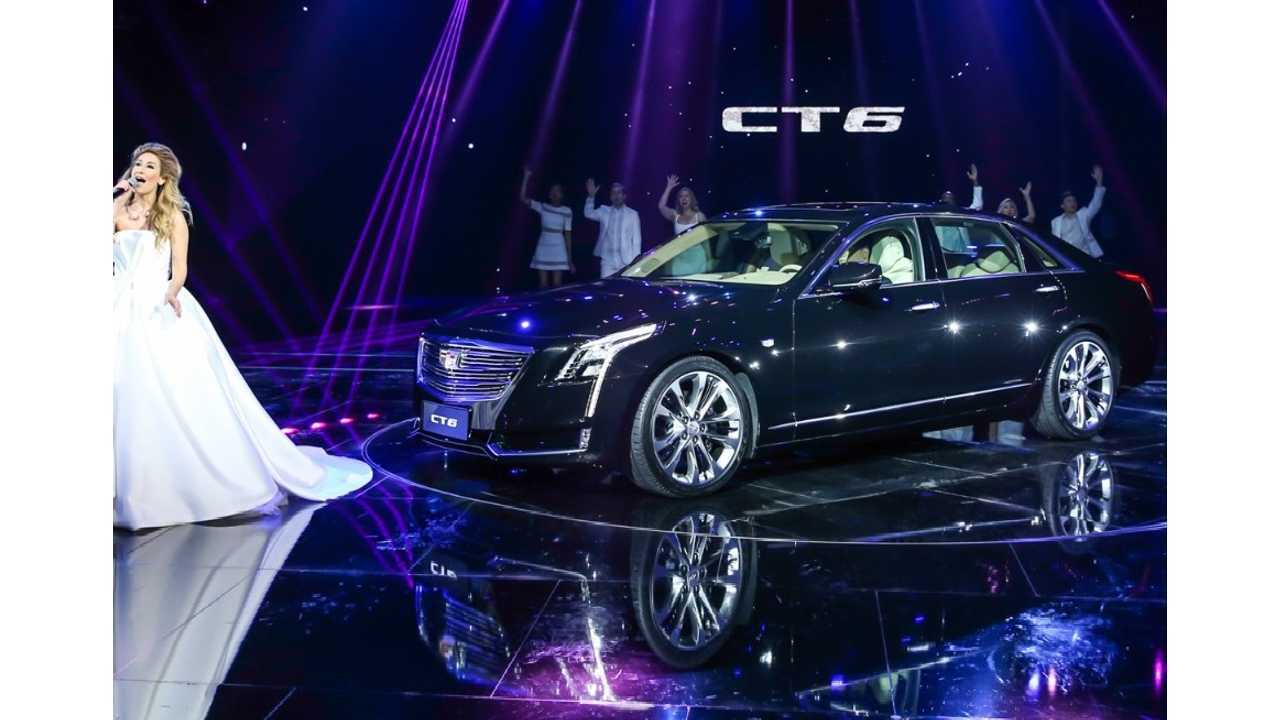 At the Shanghai Auto Show, Cadillac has debuted its RWD CT6 flagship with available plug-in option, or CT6 PHEV if you will.

GM says that with the assistance of the PHEV system, the fuel economy of the car will "more than double",  while the total output of the car moves to 335 hp and 432 lb-ft of torque.  The standard CT6 has a 22 mpg rating.

Somewhat unexpectedly, the CT6 plug-in option is found to be no slouch, and features the same sized 18.4 kWh battery as found in the next generation Chevrolet Volt, but in this case coupled to a 2.0L turbo 4-cylinder engine, and housed between the rear seats and the trunk.

“The first-ever CT6 is a technological showcase throughout, making it an ideal platform for Cadillac to offer its first plug-in hybrid.  (Cadillac ELR anyone?)

Naturally, one wonders how much all-electric range the plug-in Caddy will get.  Unfortunately, the media department at Cadillac USA is not saying yet.

"Range estimates will be provided closer to U.S. launch of the PHEV option."

However, apparently no one told product reps, or Mr. De Nysschen in China this weekend to not throw around some numbers:

"The CT6 PHEV leverages GM’s proven battery technology to provide greater than 60 km (37 miles) of all-electric range depending on speed and driver behavior."

Cadillac also says that this plug-in vehicle will be the best driver in its field, thanks to EVT technology - which GM describes as an all-new rear wheel electric variable transmission "with exclusively designed motors to provide smooth, spirited acceleration."

The two-motor EVT also uses three planetary gears mated to the 2.0L turbo 4-cylinder engine.  Cadillac says this use of a two-motor system "provides smooth and seamless power through the entire driving range."

The petrol Cadillac CT6 arrives in December, with the plug-in option to be available first in China (then later in the US), quite likely as an option on the 2017 model year CT6s in the fall.  The plug-in is not expected in the US until early 2017.

The Cadillac CT6 is built at GM's Hamtramck, Michigan facility, but the plug-in will only be made in China. No pricing has yet been released on the plug-in variant.

Another Look At The Cadillac CT6 - Not Short On Sizing

SHANGHAI - Cadillac announced today at the Shanghai Auto Show that it will add an available Plug-In Hybrid Electric (PHEV) propulsion system to its upcoming range-topping CT6 sedan. The new PHEV system is expected to more than double the fuel economy of the conventional powertrain offerings.

The CT6 PHEV takes advantage of the car’s advanced lightweight structure to create a unique formula for the prestige sedan.

“The first-ever CT6 is a technological showcase throughout, making it an ideal platform for Cadillac to offer its first plug-in hybrid,” said Cadillac President Johan de Nysschen. “In the CT6, Cadillac presents a new formula for prestige luxury. The advanced Plug-In Hybrid system is a key addition, providing a combination of exceptional fuel economy, crisp acceleration and strong electric-driving range.”

The CT6 Plug-In Hybrid system is designed to provide all-electric driving for most daily commutes, while maximizing fuel efficiency by providing blended power from the engine and battery at higher speeds and higher loads, even when energy is stored in the battery.

2016 Cadillac CT6 Uses Same Sized 18.4 kWh Battery As Found In The 2016 Chevrolet Volt - But In A Different Configuration

The CT6 PHEV leverages General Motors’ proven battery technology.  An 18.4 kWh lithium-ion battery pack is located between the rear seat and the trunk. The battery system is comprised of 192 prismatic pouch cells, which use the latest generation cell chemistry found in other GM plug-in vehicles.

With industry-leading quality levels of fewer than two problems per million battery cells produced, more than 20 million battery cells have been made for more than 73,000 GM plug-ins on the road today. The CT6 PHEV battery system will use the company’s proven active thermal control system that maintains electric range over the battery system’s life.

The battery system can be charged using a 120V or 240V charger.  Range estimates will be provided closer to U.S. launch of the PHEV option.

Inside The Cadillac CT6

The two-motor EVT also uses three planetary gears and is mated to a 2.0L turbo 4-cylinder engine with spark-ignited direct injection and variable valve technology. The use of a two-motor system provides smooth and seamless power through the entire driving range.

Cadillac expects the fuel economy of the CT6 PHEV to be more than double that of the car’s conventional engine offerings, as measured by miles per gallon equivalent. Standards for measuring vehicle fuel economy differ between China and other global regions.  Full details on the CT6 PHEV efficiency in the U.S. and other markets outside China will be released closer to the car’s introduction in those markets.

The iBooster and ESP-hev technology balance the use of the CT6 electric motors to act as generators to slow the vehicle and capture as much kinetic energy as possible during low-demand scenarios, while blending the traditional hydraulic brakes with the motors in high-demand scenarios.

As expected from a driver’s car like the CT6, the system provides improved brake pedal feel and enables increased opportunity for engine stop-start operation.

Operating Modes and Regen on Demand

The CT6 PHEV will also feature Regen on Demand, which allows the driver to temporarily regenerate energy from vehicle momentum into electricity and store in the battery pack for later use.

Regen on Demand supports a more-engaging driving experience by slowing the vehicle when entering a turn to better position it on the exit, much like downshifting with a manual transmission. Regen on Demand is engaged via steering-wheel paddles adapted from traditional performance cars.