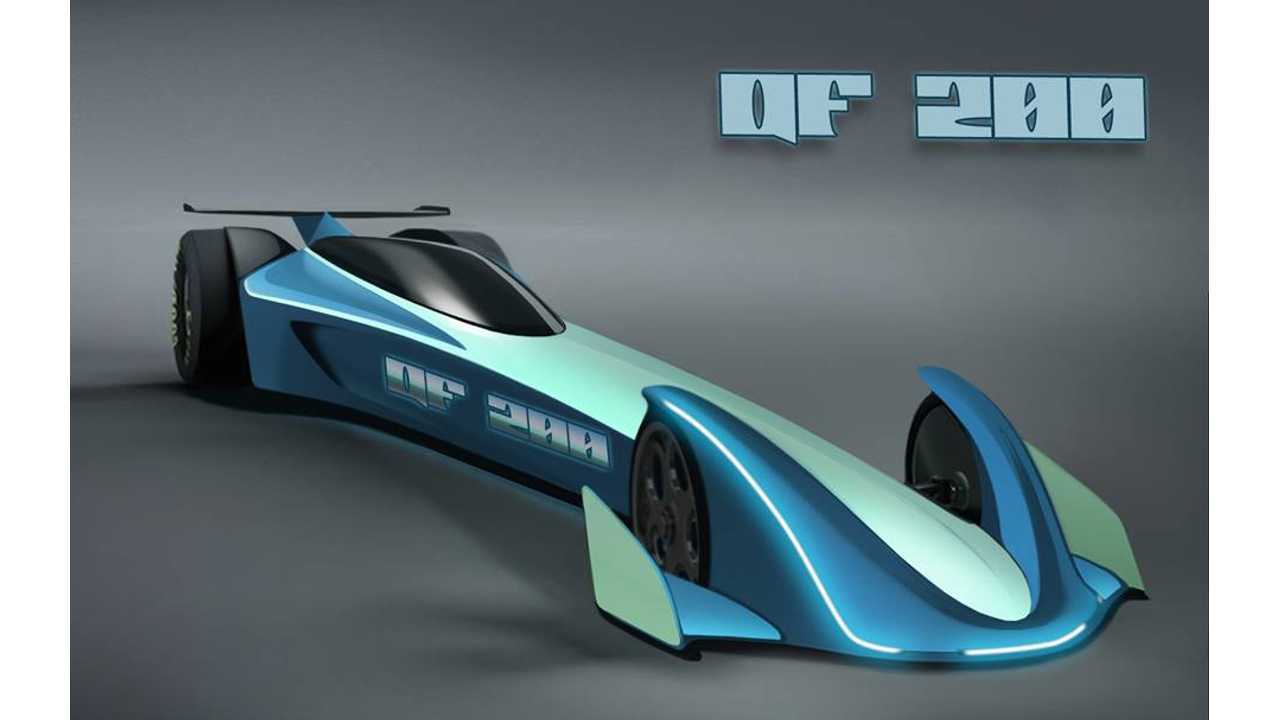 Not even hours after the "Big Daddy" Don Garlits bid for the 1/4 mile 200mph+ record ended in a shower of plasma and sparks, the QF200 team made a startling announcement. While the Don Garlits/Shawn Lawless car was still warm from its ill-fated fifth run on Monday, they posted this announcement on their Facebook page:

QF200 created and constructed “Swamp Rat 37” for the express purpose of having Don Garlits exceed 200 MPH in the ¼ mile in a battery-powered dragster. The SR-37 vehicle was fabricated and brought to life through the tireless hands-on efforts of the following people:

1) Brad Hadman Race Cars built a fine race-worthy machine. 2) Derek Barger/Hightech Systems LLC engineered an amazing 1.5 megawatt battery system. 3) The famed Kenny Youngblood produced a stunning fine art portrait of the vehicle and provided the artistic direction for every styling cue. 4) Eric Reyes rendered the car masterfully, hand lettered the cowl names and Swampy logo, and applied all of the graphics. 5) Jeff Disinger helped immensely as EV consultant from the original concept forward. 6) Lincoln Electric was on board from the beginning and staged the unveiling event in their booth at SEMA 2013. 7) Bret Goethe Enterprises engineered the driveline system. 8) Mel Uechi of Mel’s Metalworks, Las Vegas, NV helped us to refine the alloy shapes of the nose and fabricate the rear bodywork. 9) Art Goldstrom Enterprises furnished shop and storage space for the dragster in Las Vegas, NV.

In July of 2014 the differences between QF200 and Don Garlits / Shawn Lawless reached the point of our separation from the project, although not of our choosing. We believe that those differences have since spoken for themselves in the performance of the vehicle.

We are extremely pleased today to unveil the concept for our next EV dragster. The concept is by industrial designer Mark Micelli. Kenny Youngblood, Eric Reyes and custom car builder/designer Coby Gewertz will provide design and style input as well. With that much design talent, and the original SR-37 build team, this should be an absolutely incredible vehicle!

Once constructed the vehicle will be driven by a female racer, one with a current Top Fuel competition license, one with National wins in Top Fuel, Funny Car, and Pro Mod!

Schedule permitting, our next EV dragster will be driven by none other than Melanie Troxel!

As is not unusual in the stew of egos, money and testosterone of the world of drag racing, there were some fairly profound (and drama-filled) clashes in basic design approach in the road to bringing the SR37 to the track this week, and they look like a result of some traditional approaches hitting the ceiling of what is physically possible.  Here is a comment by Rich Rudman, the driving force behind Manzanita Micro, on the NEDRA (National Electric Drag Racing Assn) Facebook page:

"We believe that those differences have since spoken for themselves in the performance of the vehicle."

Well with 6 Zilla 2Ks, this is what I expected. The three 2Ks that were in there had the ability to immolate those little motors. Adding another 3 just brought the inevitable on quicker.

So, to go much faster, now we need motor tech tricks, or a whole lot of expendable motors and brushes. 6 little motors with nice brushes, but little else in the way of modifications -well the learning curve just got a LOT steeper and more expensive.

Just stuffing amps at them will no longer get you much faster. Us motor and controller guys knew this was coming. Got Controllers? check, got batteries? check. Motors?  Umm stock GE 7.2 inchers.. with a 48 volt tag on them???  Darn good motors, but now, not enough. Fewer, larger motors, with a summer's worth of dyno time might do it. I wish them the best luck, but they need hard motor dyno time with a ton of cash to make what they can't buy.

The Nitro guys have been doing this for 50 years. We need to at least start that level of effort.

From what we hear, the QF200 team is ready to hit the ground running.  Early rumblings point to a large, 2-motor design (simple by comparison to the Garlits/Lawless 6 motor/controller car) probably with matching Zilla controllers.  Motor guru Dennis Berube has retired from his motor building magics and moved to Thailand apparently, but with the proper incentives may be pulled into this project to blueprint and build the motors...  but only time will tell.

In the meantime, the driver they're courting, Melanie Troxel is a force to be reckoned with in her own right:

The daughter of 1988 NHRA Alcohol Dragster world champion Mike Troxel, Melanie grew up at the races. While still in high school, Melanie received class credit for rebuilding the engine she would use in her first race car.  Coming up through the ranks, she competed in 5 different NHRA sportsman classes. Her amateur career culminated in a number 2 finish in the NHRA national points standings for the Top Alcohol Dragster class with numerous event wins and track titles.