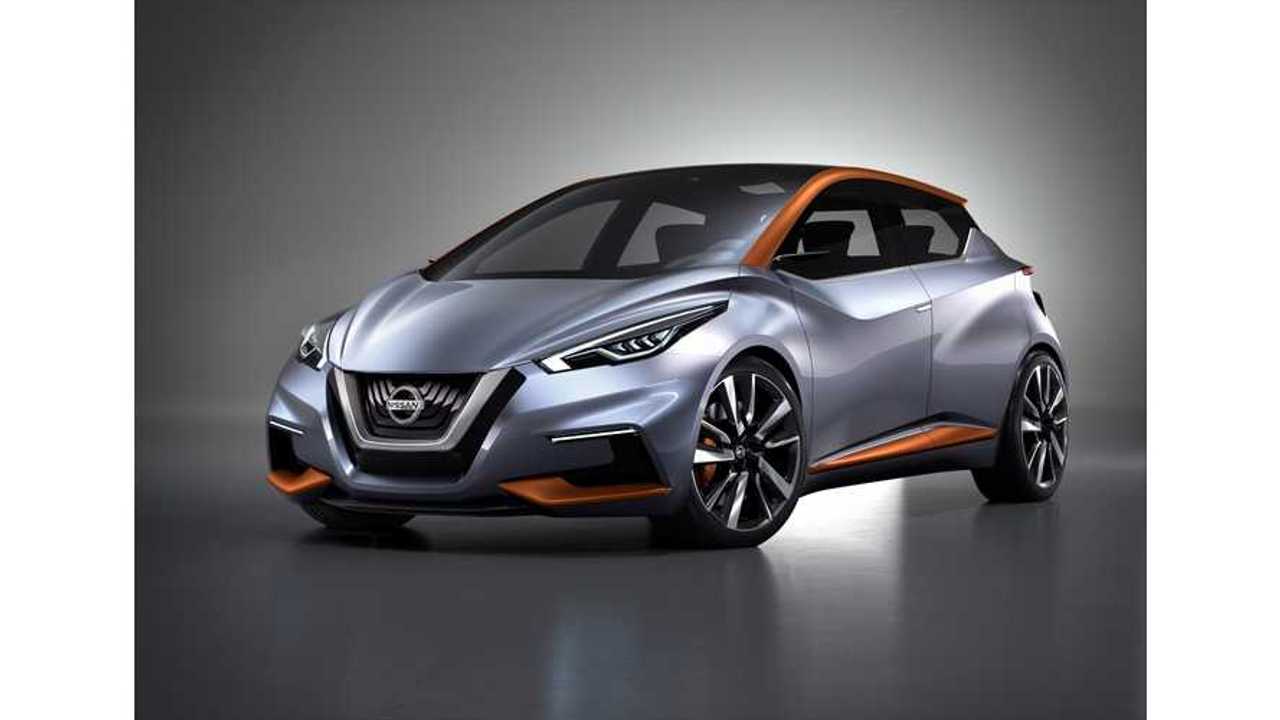 In introducing the Nissan Sway compact hatchback concept at the 2015 Geneva Motor Show, a couple of Nissan executives made public statements that were later released on Nissan's media site.

Chairman of Nissan Europe, Paul Willcox, spoke of electric cars (there are some rumors out there saying the Sway could represent the design direction of the next-gen LEAF).

Here's what Willcox had to say in regards to electric cars:

"...Finally, let me update you on Nissan Electric Vehicles. This year, Nissan will celebrate the LEAF's 5th birthday. With over 160,000 on the road, not only have the EV critics been proved wrong, but our competitors apparently ‘changed their minds' and joined the party. As with crossovers, they are fashionably late."

"Nissan leads the world in zero emissions technology, and the Nissan LEAF is the best-selling Electric Car, globally and in Europe. Customers choose LEAF because they trust us - we're the pioneers and experts in EV. If you want proof: LEAF has a 95% recommendation rate from customers."

"The best across the Nissan line-up. And we also have the all-electric eNV200, with both van and passenger vehicle versions. A seven-seat Evalia model is making its debut here at the show today."

"We will continue to improve EV batteries with the ultimate aim of offering a driving range that is comparable to conventionally powered vehicles."

So, that's where Nissan stands.  There's no indication there that Nissan is backing down from electric cars or that the automaker is going to let other competitors jump ahead.  We believe the next-gen LEAF will compete with or beat the Chevrolet Bolt is most of the critical areas in which electric cars are judged.

Check out the Sway and let us know if you'd like to see this look on the next-gen LEAF.

GENEVA – Innovative design and product planning gave birth to the Qashqai and Juke, two of the biggest automotive success stories in recent years. Now the company has applied the same radical thinking to one of the most important sectors of the market: the compact hatchback.

Unveiled at the Geneva Show, the Sway is a glimpse at how a future generation of compact Nissan models might look if the company's striking new design language was applied to a European hatchback. It is a concept car designed especially to appeal to European tastes: it is seen as emotional, edgy and exciting.

Sway has been designed to shake up the compact hatchback segment, traditionally a conservative sector of the market. With its swooping lines, striking nose, elegantly simple interior and bold use of sophisticated colors, the concept is a daring and emotional design.

There is an overall sense of unity and harmony... but with edginess unexpected in this market segment. The interior, for example, applies techniques more usually seen in industrial architecture such as structural aluminum elements to signify both simplicity and strength, but also the attention to detail and use of color and materials associated with premium goods.

The exterior, meanwhile, blends four highly distinctive elements - the V-motion grille, floating roof, boomerang lamps and kicked-up C-pillar - to shape a new design signature that has already been seen on the Nissan Lannia Concept that was presented last year in Beijing at Auto China 2014, as well as the new Murano recently launched in the US. The Sway represents the first time this new design language has been expressed on a compact hatchback, while future Nissan models in different market segments in all regions will follow this styling direction.

The Sway's character line begins with the V-motion grille, mounted low at the front between twin V-shaped quarter bumpers. The grille is the starting point for a bold contour that curves over the bonnet and front wheels before dipping dramatically towards the center of the front door. It then sweeps upwards towards the rear of the car, giving the side profile an almost sensuous form.

It sits proud of the bonnet before leading into a distinct and sharp crease down the car's waistline – a waistline that is pinched by the rising indented triangular sill feature.

Alongside the V-motion grille sit the boomerang headlamps. Usually the boomerang shape is created by the use of LED lamps within a more conventional lamp shape: this time the lamps themselves take the signature shape, while the LEDs within create the impression of a pair of eyes, watching.

The signature boomerang taillights are equally dramatic, dissecting the rear three-quarter elements of the car. Twin trapezoidal exhaust pipes emerge from either side of the registration plate housing towards the middle of the rear section rather than underneath the bumper.

Complex rear doors house not only the extended sill and waistline crease, but also the shapely flared fenders needed to cover the rear wheels. An upward flick towards the rear of the glass-line reduces the C-pillar between the door and the floating roof to a minimum. To ease ingress and egress, this concept car has no central B-pillar and rear-hinged back doors.

Another feature of Nissan's new design language is the floating roof, which is expressed this time by a panoramic glass roof, framed by an extended C-shaped construction running from the A-pillars along the side of the roof to the rear cross link above the tailgate. On the concept car this structure is highlighted by the use of a bold orange color that contrasts with the blue-grey of the body.

Extra rigidity is provided by a distinctive deformed X-structure in the center of the roof with the crossing point of the ‘X' sitting above the front seat passengers.

The glass roof provides two major benefits: those on the inside can enjoy a sense of freedom and space while those on the outside can admire the interior.

Additionally, the Sway is unique in its color coordination between the exterior and interior.

The exterior color of the car is "bluish dawn grey," a grey with hints of blue which are visible under light, harmonized with a contrasting orange color. The sophisticated color combination fits yet stands out beautifully with the European cityscape.

The interior uses a darker, deeper blue, with high contrasting ivory and orange colors matching the exterior to give a sense of unity to the car.

Inspired by the IDx show car first revealed at the 2013 Tokyo motor show, the Sway adopts – and develops – its interior design concept of a gliding wing shaped dashboard.

The driving force behind the gliding wing shape is its elegant simplicity. The result is an interior in which function takes a priority, and where nothing has been used for mere decorative effect.

Structural elements, for example, are shown as structural elements. The door pulls are designed to be integrated as a part of exposed aluminum struts. Even the three-spoke steering wheel has a “back-to-basics” simplicity, with a squared off bottom section and aluminum spokes.

Just two basic instruments face the driver, with all other functions captured on a large trapezoidal tablet in the center of the dashboard visible – and usable – by both driver and front seat passenger.

The lightweight seats have an aluminum structure - once again exposed - and are covered in a premium suede-like fabric partially accentuated with pearl-effect material, featuring stitching techniques more usually found on luxury handbags. Colour co-ordination sees the use of strong blue and orange themes inside, complementing the exterior perfectly.

Although a compact car, the lack of clutter, the removal of the B-pillar and the use simple yet elegant structures makes the interior seem larger than expected.

"We believe that the Sway continues our tradition of challenging the status quo in market segments by bringing something fresh, distinctive and striking, much as we did with Qashqai and Juke.

"With this new concept car for Geneva, we are experimenting to see how Nissan might be able to bring fresh ideas to the compact hatchback segment," said Shiro Nakamura, Senior Vice President, Design and Chief Creative Officer, Nissan Motor Co., Ltd.

Paul Willcox, Chairman Nissan Europe, said: "Nissan is on the move. The brand stands for bold, innovative thinking in the European automotive market – indeed around the globe – and our growth in Europe is led by outstanding new products, which are defined by outstanding design. The Sway underlines how important design is for Nissan in building our brand and driving our growth."

About Nissan in Europe Nissan has one of the most comprehensive European presences of any overseas manufacturer, employing more than 14,500 staff across locally based design, research & development, manufacturing, logistics and sales & marketing operations. Last year Nissan plants in the UK, Spain and Russia produced more than 635,000 vehicles including mini-MPVs, award-winning crossovers, SUVs, commercial vehicles and the Nissan LEAF, the world's most popular Electric Vehicle with 97% performance satisfaction and 95% of customers willing to recommend the car to friends. Nissan now offers 24 diverse and innovative products for sale in Europe today, and is positioned to become the number one Asian brand in Europe.

Nissan Motor Co., Ltd., Japan's second-largest automotive company, is headquartered in Yokohama, Japan, and is part of the Renault-Nissan Alliance. Operating with more than 244,500 employees globally, Nissan sold almost 5.2 million vehicles and generated revenue of 10.5 trillion yen (USD 105 billion) in fiscal 2013. Nissan delivers a comprehensive range of more than 60 models under the Nissan, Infiniti and Datsun brands. In 2010, Nissan introduced the Nissan LEAF, and continues to lead in zero-emission mobility. The LEAF, the first mass-market, pure-electric vehicle launched globally, is now the best-selling EV in history with almost 50% share of the zero-emission vehicle segment.