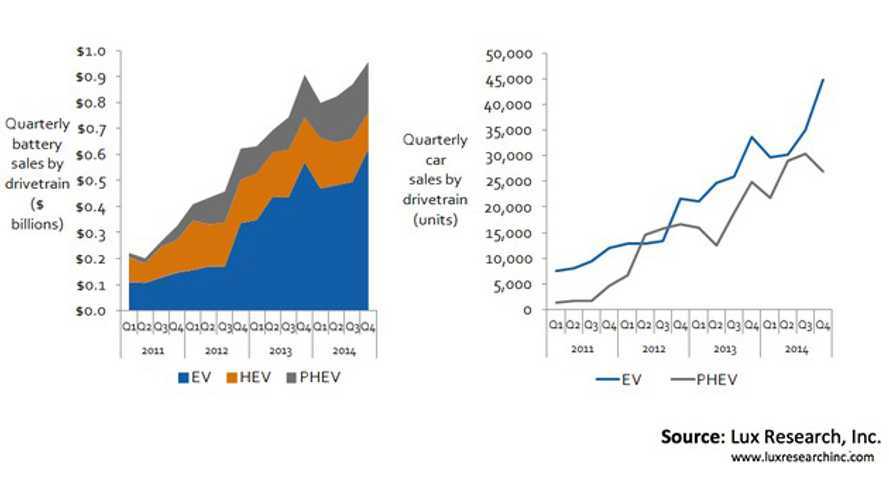 The making of a Nissan LEAF battery in Sunderland, UK

"By 2020, the new EV battleground should account for $5 billion or more in Li-ion battery sales, making it the biggest new opportunity for energy storage in transportation, because it combines larger packs (around 50 kWh) with more sales (hundreds of thousands of vehicles). Clients should therefore view this parameter space as a key place to focus efforts: Designing innovations to enable 50 kWh packs that achieve 200 Wh/kg and $300/kWh at the pack level, primarily for Tesla, GM, Volkswagen, and Nissan."

Batteries for BEVs are a much larger market than for hybrids and plug-in hybrids:

"According to Lux Research's Automotive Battery Tracker (client registration required), in 2014 EVs used a remarkable $2.1 billion worth of energy storage. Meanwhile, plug-in hybrids (PHEVs) used three times less batteries – about $0.7 billion worth – despite selling in similar vehicle volumes (see Figure 1). This discrepancy is due to the fact that PHEVs typically need much smaller battery packs than EVs, since the former have an engine to extend range, while EVs have to make due on batteries alone. Hybrids (HEVs) cannot match EVs either: Despite selling about 1.5 million units in 2014, an order of magnitude more than the 140,000 EVs that consumers bought in 2014, HEVs also used just $0.7 billion worth of energy storage in 2014."

Lux Research expects that to introduce BEVs with range of 150 miles to 200 miles, prices of batteries must fall significantly - $300/kWh at the pack level.

"The obstacle to achieving this new class of vehicles is battery costs. The first generation of EV batteries were expensive. For example, Ford’s CEO noted in 2012 that his company was paying about $520/kWh to $650/kWh for its Focus EV battery packs. Scale and purchasing commitment is undoubtedly part of the issue as well, as Ford's Focus EV has turned out to be more compliance vehicle than high-volume production car. But even at higher volumes, it is likely that Li-ion battery packs cost about $400/kWh to $500/kWh for most OEMs. These costs are on the brink of a step-change. LG Chem Power (client registration required) is aiming to cut its Li-ion cell prices from $300/kWh to $200/kWh by 2017. Bosch's CEO sees Li-ion batteries falling to half their current cost by 2020, and of course, part of the Tesla-Panasonic Gigafactory effort (client registration required) is about cost reduction. All things considered, to compete effectively in the new EV battleground, developers will need to make batteries that cost less than $300/kWh at the pack level (or less than $200/kWh at the cell level), while also boosting energy densities to about 200 Wh/kg at the pack level."