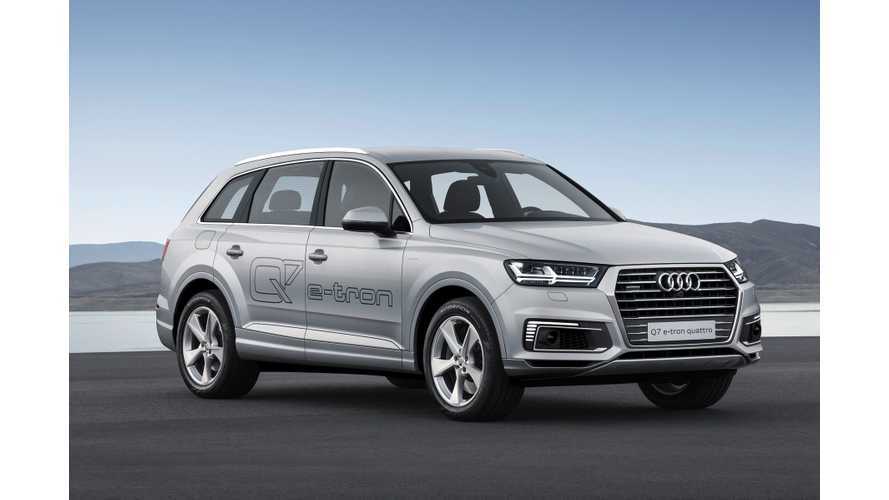 Audi has now released full details on its Audi Q7 e-tron 2.0 TFSI quattro, which as we reported earlier will be powered by a gas engine. The European version, with a diesel engine, was unveiled at 2015 Geneva Motor Show.

The gas extended version of Q7 e-tron will be unveiled at Auto Shanghai 2015 next week. Sales are planned in Asia (China, Japan, Singapore) and we believe in North America too.

Interesting is that the Q7 e-tron gets a heat pump to improve efficiency during short distance travel in the winter.

The standard consumption of 2.5 liters of fuel (94.1 US mpg) corresponds to CO2 emissions of less than 60 grams per kilometer (96.6 g/mi) and is a new best value in the segment.

The standard thermal management system with integrated heat pump has been specially developed for the plug-in hybrids of the Q7 family*. Audi is the first manufacturer worldwide to market this technology, enabling the brand to establish a new benchmark with respect to electric range, interior comfort and air-conditioning system efficiency.

Operation of the standard MMI navigation plus system is extremely convenient using the MMI touchpad or simplified voice control. The infotainment system in the Audi Q7 e-tron 2.0 TFSI quattro is tightly integrated into the hybrid management system. In hybrid mode, the system uses the navigation data – including long-range data – to select the most fuel-efficient combination of drive modes along the route to the destination.

The new Audi Q7 e-tron 2.0 TFSI quattro boasts sporty talents, which it puts on display both in town and on the open road. The new electromechanical power steering is highly efficient as well as sensitive. The five-link wheel suspension, also newly developed, on the front and rear axles are more than 60 kilograms (132.3 lb) lighter than the axles on the conventional Q7 predecessor model, and greatly contribute to the high driving dynamics. The lowered center of gravity also plays an essential role here.

The new Audi Q7 e-tron 2.0 TFSI quattro 270 kW (367 hp) system output and 700 Nm (516.3 lb-ft) system torque: The Audi Q7 e-tron 2.0 TFSI quattro has been specially designed for Asian markets (China, Singapore and Japan) and sets new standards using plug-in hybrid technology and quattro all-wheel drive. The large SUV accelerates like a sports car from 0 to 100 km/h (62.1 mph) in 5.9 seconds, but consumes no more than 2.5 liters of fuel per 100 kilometers (94.1 US mpg) according the measurement method specified in China for plug-in hybrid vehicles (PHEVs) – a best value in its class.

Like all Audi hybrid models, the Q7 e-tron 2.0 TFSI quattro has also been designed as a parallel hybrid. Its 2.0. TFSI, a highly efficient, latest-generation four-cylinder engine, delivers 185 kW (252 hp) of power and 370 Nm (272.9 lb-ft) of torque. Active engine bearings use targeted counterpulses to eliminate undesirable vibrations.

The disk-shaped electric motor provides 94 kW and 350 Nm (258.1 lb-ft) of torque. Together with a decoupler, it is integrated into the eight-speed tiptronic. The automatic transmission is outstanding for its high efficiency and low weight. The quattro permanent all-wheel drive system distributes the power to all four wheels. During fast cornering, its center differential works closely with the torque vectoring system, an intelligent software feature.

Another highlight of the Q7 e-tron 2.0 TFSI quattro is the standard Audi virtual cockpit. The all-digital instrument cluster with 12.3-inch display presents all key information in impressively high-quality graphics. The driver can retrieve different levels of information, including specific e-tron displays such as the powermeter. In addition, the instrument cluster offers displays for the energy flow in electric mode, the range (with numbers and graphs) and the charge level of the battery.

Another efficiency component is the standard thermal management system with integrated heat pump, specially developed for the plug-in hybrids of the Q7 family. This makes it possible for the waste heat from the electrical drive components to be made available to the interior. Audi is the first manufacturer worldwide to bring this technology to a production plug-in hybrid, enabling the brand top set new standard with respect to interior comfort, air-conditioning system efficiency and range in purely electric EV mode. Benefits for the customer include a fast-heating cabin and the ability to drive more frequently and longer on electric power alone, even in low outside temperatures.

The new Q7 e-tron quattro is equipped with the new two-phase charging technology that permits charging with up to 7.2 kW of power. Depending on the infrastructure and with a correspondingly high-powered industrial outlet and charging cable, the customer can fully charge the battery in around 2.5 hours.

The large SUV generally starts in electric mode. To activate the TFSI, the driver has to press down on the active accelerator pedal (another innovation from Audi) beyond a certain point of resistance. The point at which the resistance occurs is based on the requirements of the hybrid management system. A pressure point must also be overcome for boosting, in which case both the engine and electric motor work together.

When hybrid mode is active and the eight-speed tiptronic with integrated electric motor is in D, the Audi Q7 e-tron 2.0 TFSI quattro changes to coasting mode when the driver takes his foot off the accelerator. The TFSI and the electric motor are then deactivated and restarted with no perceptible vibration once the accelerator is pressed again.

When driving in battery charge mode and with the transmission set to S, the system recovers energy as soon as the driver lifts off of the accelerator. The driver can progressively influence the degree of recuperation using the shift paddles on the steering wheel. Most braking is also performed via the electric motor. The hydraulic wheel brakes are used for moderate or sharper deceleration.

The standard MMI navigation plus is closely integrated into the hybrid management system on the Audi Q7 e-tron 2.0 TFSI quattro. In hybrid mode, the system uses the navigation data – including long-range data – to select the most fuel-efficient combination of drive modes along the route to the destination.

New technologies: top comfort and sporty handling The new Audi Q7 e-tron 2.0 TFSI quattro is a car with sporty talents both in town and on the open road. The new electromechanical power steering is highly efficient as well as sensitive. The five-link wheel suspension, also newly developed, on the front and rear axles are 60 kilograms (132.3 lb) lighter compared with the predecessor model, and greatly contribute to the high driving dynamics. The lowered center of gravity also plays an essential role here.

Even the basic version of the large SUV rolls along gently and smoothly, while comfort is further enhanced by the optional adaptive air suspension with controlled damping. The driver can regulate the mode of operation via the standard Audi drive select dynamic handling system. It offers up to seven modes and integrates further technical components such as the steering, accelerator and automatic transmission.

Power and understatement: the design The design of the new 5.05 meter-long (16.6 ft) Audi Q7* strikes a balance between a powerful, honed style and elegant understatement. Details such as the deeply sculpted singleframe grille, the striking emphasis of the wheels and the flared edges over the wheels – the “quattro blisters” – embody the brand’s DNA. All lines and surfaces are designed precisely and incisively, and accentuate the width and solidness of the car. The tailgate wraps around the steeply raked D-pillars – typical of all Q models from Audi.

The Q7 e-tron 2.0 TFSI quattro features special designs for the singleframe grille, the air inlets, the 19-inch and optional 20-inch wheels and the rear diffuser. The headlights are three-dimensional, with their light signature appearing as a double arrow. LED light guides in the air inlets generate a new, characteristic e-tron signature of staggered lines that underscore the horizontals.

The body plays a decisive role in the relatively low weight of the Audi Q7 e‑tron 2.0 TFSI quattro. It draws on the same potential harbored by lightweight construction as the conventional Q7. The coefficient of drag is just 0.34.

Elegant design and top quality: the interior The Audi Q7 e-tron 2.0 TFSI quattro offers the largest interior in its segment. The three rear seats have adjustable backrests and can be moved fore/aft as desired. The lithium-ion battery is mounted in such a way as to take up as little space as possible.

Design elements like the wrap-around – the long arc around the driver and front passenger – the trim strips and the panel of air vents emphasize the generosity of the interior. The two-part trim areas allow many individual combinations; the range of upholstery is of luxury-class standard. New to the Q family are premium Audi design selection materials color-coordinated to the finest detail.

State of the art: controls and displays Audi also uses the latest technology from consumer electronics in the area of infotainment. Its main element is the second-generation modular infotainment platform, which utilizes the enormous computing power of the Tegra 30 graphics chip from NVIDIA. Operation is by voice, with the multifunction steering wheel or with the completely newly developed MMI terminal, the MMI touchpad. Audi equips all Q7 e‑tron models with the MMI all-in-touch, the touchpad with haptic feedback. The supplemental infotainment modules are innovative: the Audi tablet, which serves as Rear Seat Entertainment, the 3D sound systems from Bose and Bang & Olufsen, and the new Audi phone box that inductively charges cell phones and significantly improves reception quality by connecting to the exterior antenna.

Audi has also added specific items to infotainment for displays in electric mode. For example, consumption statistics are available along with a graphic display of the electric range in the navigation map. Owners of the Audi Q7 e-tron 2.0 TFSI quattro can use a timer to start the charging and precooling/preheating processes, thus adapting these to the desired departure time to conserve resources and reduce costs.

The equipment: typically top of the line The Audi Q7 e-tron 2.0 TFSI quattro comes with the standard equipment of a top model. Its special features include the Audi virtual cockpit, MMI navigation plus with online updates of the navigation map, MMI all-in-touch and 19-inch wheels. The automatic air conditioning is also a tailored solution. It operates in unison with a heat pump that utilizes the waste heat of the electrical drive components for thermal management. As an important efficiency element, it is another great innovation in the Audi Q7 e-tron, heating up the interior faster at low temperatures than a conventional solution, for example, to extend the electric range by up to 20 percent.

Options for the SUV include a head-up display, tinted privacy glazing and a panoramic glass sunroof. If desired, the driver and front passenger can sit on climate-controlled, customized contour seats with massage function.

Fuel consumption of the models named above:

**The fuel consumption and the CO2 emissions of a vehicle vary due to the choice of wheels and tires. They not only depend on the efficient utilization of the fuel by the vehicle, but are also influenced by driving behavior and other non-technical factors."