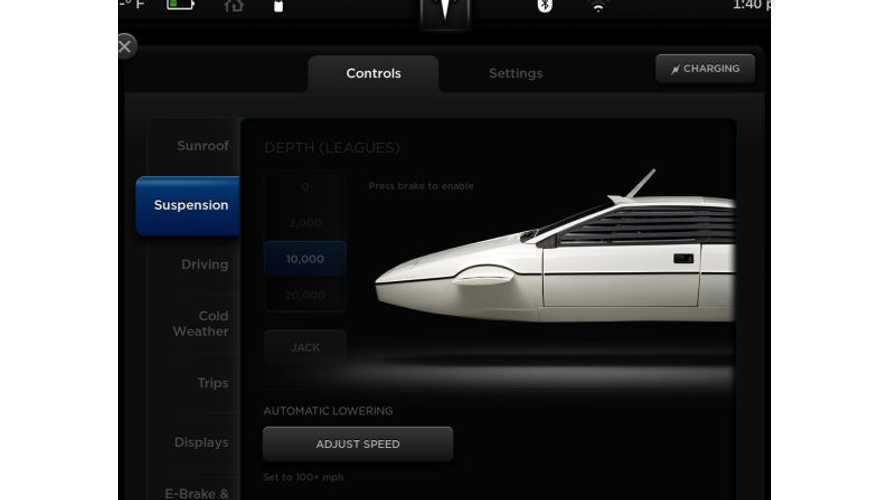 Officially among nerds it's known as an "easter egg".  Something that is an unexpected treat, that usually takes a little effort (or luck) to find, but everybody's all a-twitter about the latest easter egg on the Tesla Model S's screen (only on models equipped with air suspension, we believe): the James Bond Lotus/submarine that Musk picked up at auction.  Which begs the question.  Is he Tony Stark, or really James Bond disguised as Tony Stark? Disguised as Elon Musk?

Check out the background story on the car, auction and all that in our previous coverage, (Elon Musk Buys James Bond Lotus Submarine and James Bond Lotus Esprit Submarine On Display At Tesla Motors Design Studio ) but the short story is that Musk was a secret bidder and bought the car awhile back putting it into the Tesla Motors Design Studio. Because: Musk.  While the car is not a car that can transform into a sub, or even function as a car, it is an actual working wet sub.  Which means, yeah, you can still get the girl after the chase scene, but you're both going to be wearing scuba gear as you sub off into the sunset. Musk claims the plan is to "...upgrade it with a Tesla electric powertrain and try to make it transform for real.”

Everybody will show you the screen shot, but if you want videos from the film, of course, here's where you'll find 'em.  Pass the popcorn.