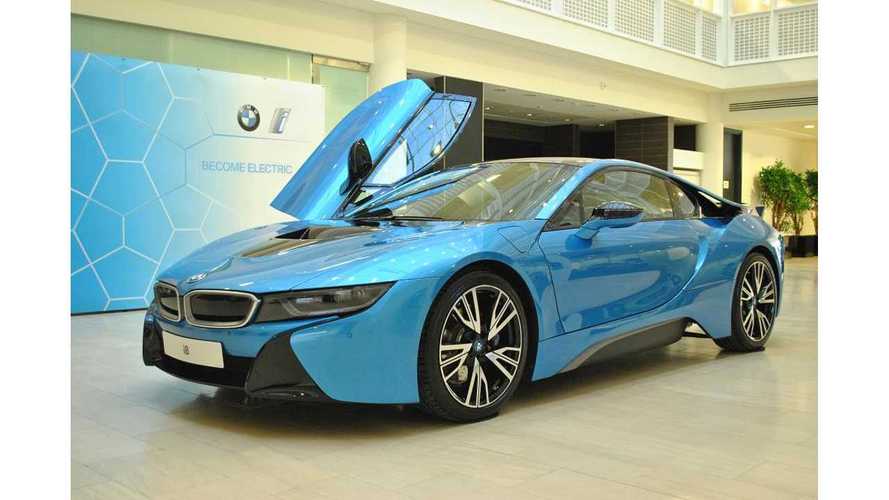 The BMW i8 has been crowned 2015 UK Car of the Year (the car's road for overall success was opened by its win in the Best Performance Car category.

This is the only plug-in car awarded this time, but it attracted the attention of 14 of the 27 judges. Second place was the Citroën C4 Cactus and Renault Twingo.

"The BMW i8 plug-in hybrid sports car has been crowned UK Car of the Year for 2015. Having fought off stiff competition to the title of Performance Car of the Year, the four-seat technological tour de force also won the overall vote.

Launched in 2014, the UK Car of the Year Awards are judged by 27 of Britain’s most-read motoring journalists. Each judge uses their expertise to pick out the top performer in 12 vehicle categories, before deciding the overall winner from their favourites in each class."

John Challen, Managing Director of UK Car of the Year Awards, and Editor of ukcoty.co.uk stated:

“The automotive industry has seen many hybrid models in recent years, but nothing quite like the i8. The term ‘game-changer’ is sometimes overused when talking about new cars, but in the case of the i8, it is totally justified. The latest ‘i’ model completely redefines the performance car segment, and is helped by a hybrid powertrain that is really quite special.”

“The BMW i8 is the culmination of many years of investment, hard work and commitment to create the world’s most progressive sports car. With our first two BMW i vehicles – the i3 and i8 – being named consecutive UK Car of the Year winners, our technology strategy is being recognised as truly game-changing for the car industry.”

Paul Hudson from The Telegraph remarked:

it was “a fantastic demonstration that an electrically-powered future need not be dull”, while Graeme Lambert from Parkers added: “The i8 represents the future. It also shows us that being excited and being eco-conscious behind the wheel aren’t mutually exclusive.”

“The BMW i8 basically reinvents the performance car. Stunning to look at, and amazing to drive, there's nothing else like it out there.”

UK Car of the Year Awards

Top Gear’s Tom Ford described the i8 as:

“hybrid, clever, exciting – the i8 manages to be a consummate driving experience.”

Full list of UK Car of the Year Awards 2015 winners: