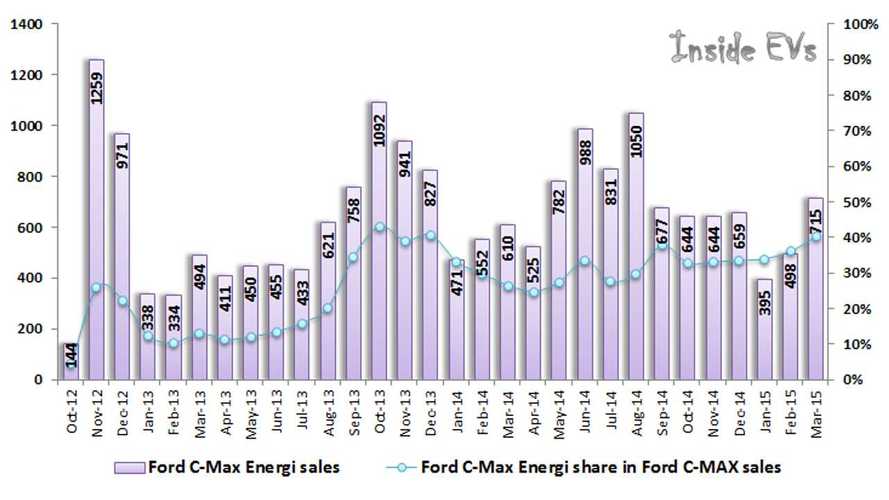 C-Max is the only Ford available solely as a hybrid or plug-in hybrid without a conventional version in the U.S.

Combining the sales result of both we find that the plug-in version - Energi - has stable share of 30-40% of sales over the past 20 months.

While one might say that this demonstrates the high value of a plug-in option, it likely is more a reflection on how well the non plug-in version has not been received.

In April, cumulative sales of C-Max Energi in US should hit the 20,000 mark.

At the same time, in 30 months, C-MAX hybrid reached 80,000, but sales of the hybrid version are falling compared to one or two years ago.

Situation looks much different for Ford Fusion Energi, which only counts for fraction of sales of the Ford Fusion family, which has a popular conventional non-hybrid version.

Noteworthy is that the Fusion Hybrid had over 76,000 sales (nearly 12%), and sales between the Hybrid and plug-in hybrid Energi divides in a similar proportion to C-MAX: on average in 26 months 4 hybrids are sold for every 1 plug-in hybrid.

Third, and the only all-electric offered by Ford, the Focus Electric oscillates around 1% of all Focus sales.

So if the regular C-Max is a disappointment compared to the plug-in version, the opposite is true of the Focus Electric versus its petrol brother.

Ford isn't doing too much to increase sales of all-electric cars, but who knows, maybe someday that will change.