A Rider Talks About the Ride: Danny Pottage on Racing the Voltron (w/video) 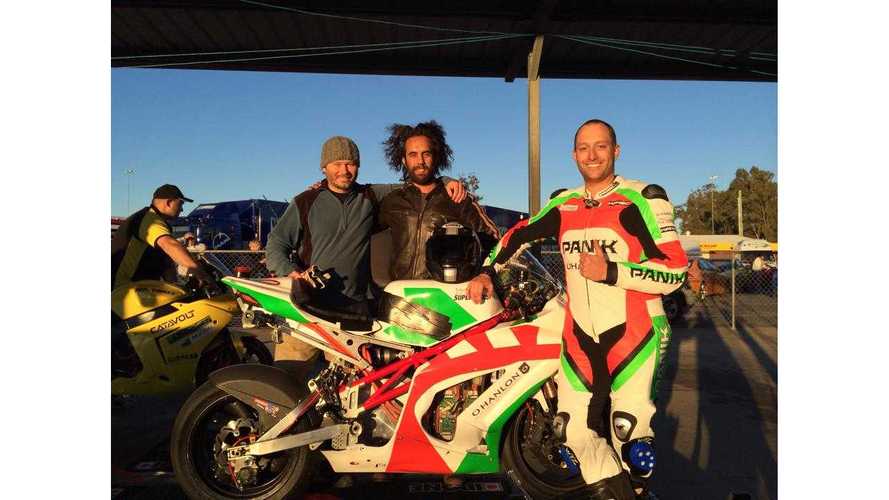 Y'all remember the Voltron, right?  700V of insanity on two wheels, ripping up the track in Australia?  Danny Pottage, the bike's rider, just wrote up an amazingly detailed account of his experiences riding the bike - what it's like to ride a true electric superbike, compared to his gas riding experience, what it's like to ride this electric superbike and account of several of his races last season, along with video.  He even talks about racing electric scooters - the primrose path by which Jones teased him in to the whole idea of racing an electric motorcycle.  Read that complete post here. if you've ever had the least bit of curiosity.

Here are some snippets:

"The fun begins as you exit pit lane and take the first series of corners, rolling on and off you realize you have direct control over the rate of acceleration. Want to go quicker? Roll on more, that’s all there is to it. Power delivery is as smooth and precise as you could imagine. There is no waiting for the revs to come into the sweet spot, you’re always in it. There is no lag, no snatch from closed to cracked throttle, no vibration from the motor, nothing at all, just smooth acceleration whenever you turn the throttle. There’s a perfect connection between what you ask for and what it delivers."

This is very interesting from a rider's point of view - much of the experience is entirely new, yet still, because it's essentially a garage-built bike, there's a lot of it that is "old school".  Also, a bit about the regen braking and tranny - or lack thereof:

"It’s old school riding, no wheelie control, no traction control, nothing. If you want to spin the wheel you can, pour on too much on corner exit and it’ll lift the front but it’s all so smooth and tractable it is really easy to control and by now you have completely forgot about the clutch or the gears because you simply don’t need them. It’s in the right gear all the time. Engine or regenerative braking is tuneable so we have it so it decelerates like a 1000cc in 4th gear just to steady the rear."

Danny came to racing, actually, motorcycles in general, fairly recently.  He bought his first bike in 2007, took it to the track, and pretty much immediately, by his accounts, broke a bunch of ribs.  He started off with a Honda CBR600RR, one of the fastest factory race-ready bikes on the planet, and, once humbled by his missteps, settled down and went through the process of learning to race, and accruing some experience.  He posted a pretty much complete story of his decision to start racing and his experiences here: potz wants to go racing, on the Perth area motorcycle forum.  He's 33, has been club racing since 2010 or so, has a lovely wife and this guy working the pits >>>>>

Yeah, that's the photobomb king we met before.

Pottage is quick to credit his good fortune and the team's efforts:

"I feel so privileged to have met Chris and Mike. We really need more innovators and thinkers in the world like these guys.

It took a huge team effort and  a bit of luck to achieve what we did last year and I look forward to the start of the 2015 season. Who knows what will happen and where it could all take us but I'm having real fun racing this bike."

...and also his supporters and sponsors:

Enjoy the post, but in the meantime, if you want to see how to sandbag a speed-freak with some EV fun and games?  Check out Danny's first race.  On electric scooters.  Throw a grown man on an electric scooter and who knows what-all will happen.