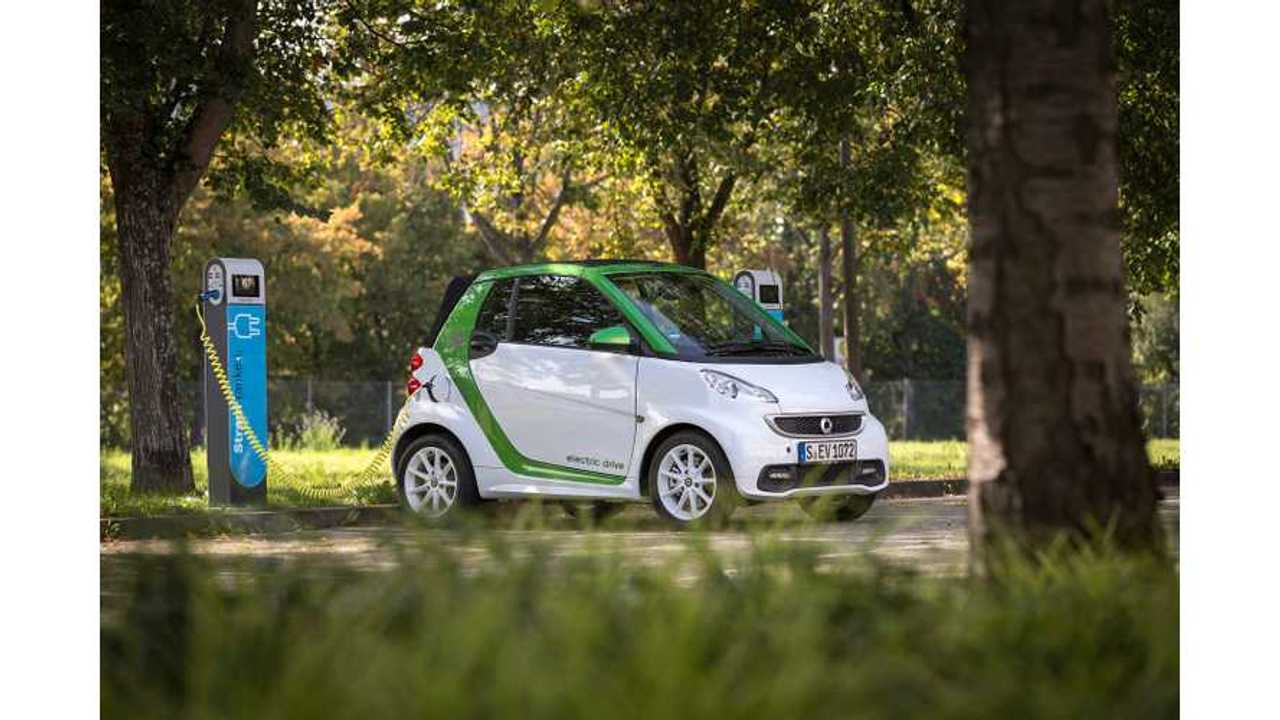 In Germany, the market leader for all-electric cars is the smart fortwo electric drive.

Moreover, in 2014, the electric smart, with 1,589 sales, captured the best selling title for the third consecutive year!

Last year, smart ed's share among all BEVs sold in Germany stood at 18.6%.

We must just note that smart (and official registration data) does not include BMW i3 with range extender in the all-electric car segment. i3 had 2,233 registrations in Germany in 2014, but only 1,243 without REx.

Since 2007, smart delivered in Germany over 4,700 electric cars (third-generation smart fortwo electric drive was launched in 2012).

A large part of registrations are from car2go - 500 in Stuttgart. Additional 220 cars are used in charge@work.

Stuttgart's dense network of public charging stations is there for a good reason: after all, this is where Germany's largest purely electric car sharing fleet is at home with 500 smart fortwo electric drives. At present there are approximately 13,000 car2go vehicles on the roads of 29 towns and cities in Europe and North America – 1300 thereof with battery-electric drive.  There are purely electric fleets in Stuttgart in Germany, Amsterdam in the Netherlands and San Diego in the USA. In these three cities car2go customers have already driven more than 18 million kilometres powered purely by electricity.
One and a half million green kilometres with e-smarts from charge@work
Zero-emission driving with charging at work – this concept has been very well received by Daimler employees. Since the charge@work project was launched in October 2013 they have used the cars privately to drive more than 1.5 million kilometres, or to put it another way: approximately 40 times around the world. In the charge@work programme, employees can flexibly rent one of 220 smart fortwo electric drives online for personal use, from a weekend to a weekly or monthly rental or even long-term for a maximum of one year. From the start of the project to January 2015 a good 1000 employees took advantage of the scheme and booked vehicles more than 2000 times.
One reason for the success is the special concept: charge@work enables those who do not have a garage of their own for charging to benefit from electric mobility as well. Daimler offers parking spaces with a charging infrastructure for personal or business use; nine Daimler sites are already "on the grid": Stuttgart Möhringen and Untertürkheim, Böblingen, Sindelfingen, Esslingen-Mettingen, Wiesensteig, Gernsbach, Fellbach- Schmiden and Berlin-Ludwigsfelde.  The vehicles have already been charged with a total of around 220,000 (218,542,47) kWh of electricity.  This is equal to the electricity needed to make approximately fifteen million cups of coffee.  And charging with charge@work is just as easy as making coffee:  simply park the car, connect it and charge it with electricity while you work. Authentication with a charging card or text message is not necessary – the vehicle conveniently authorises itself without any user interaction at all. Those who choose the optional quick charging function with a 22 kW on-board charger can even charge their vehicle in less than an hour. With the standard on-board charger, charging takes approximately six hours – so the smart is fully charged by the end of the working day."