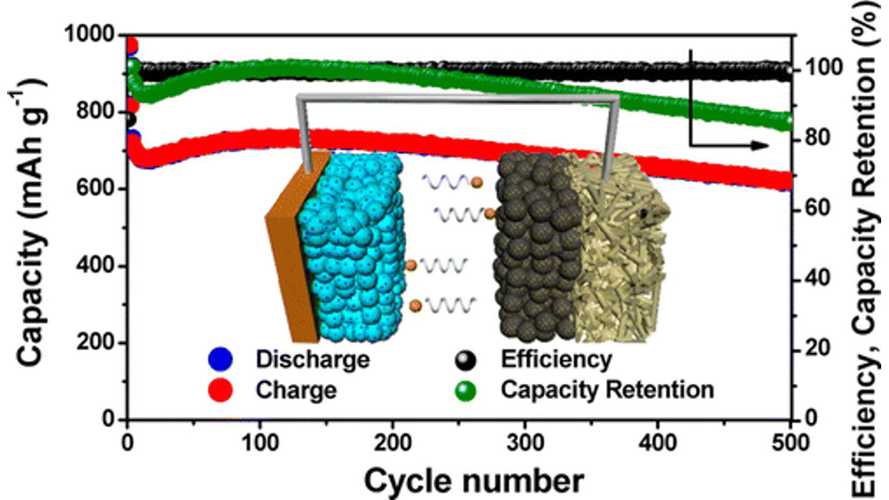 Good news is coming from the battery front where researchers in South Korea and Italy announced a milestone for lithium–sulfur cells.

We believe that the cycles themselves were low-current - there is a value C/3 (3 hours charging/discharging) mentioned in the article in the part about cathodes, which still would be not enough for a car, but efficiency is brilliant.

Work is presented in the ACS journal Nano Letters:

"Lithium–sulfur batteries could become an excellent alternative to replace the currently used lithium-ion batteries due to their higher energy density and lower production cost; however, commercialization of lithium–sulfur batteries has so far been limited due to the cyclability problems associated with both the sulfur cathode and the lithium–metal anode. Herein, we demonstrate a highly reliable lithium–sulfur battery showing cycle performance comparable to that of lithium-ion batteries; our design uses a highly reversible dual-type sulfur cathode (solid sulfur electrode and polysulfide catholyte) and a lithiated Si/SiOx nanosphere anode. Our lithium–sulfur cell shows superior battery performance in terms of high specific capacity, excellent charge–discharge efficiency, and remarkable cycle life, delivering a specific capacity of ∼750 mAh g–1 over 500 cycles (85% of the initial capacity). These promising behaviors may arise from a synergistic effect of the enhanced electrochemical performance of the newly designed anode and the optimized layout of the cathode."