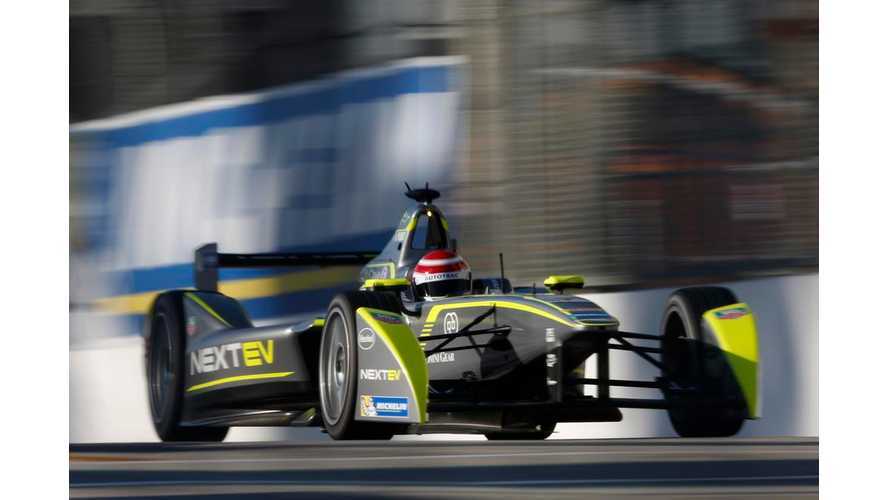 Autocar's Jeremy Taylor was the first British journalist to have the opportunity to test drive the Formula E racer.

The test was held at the Homestead-Miami Speedway, Florida during the 5th Formula E round in Miami.

The electric racer is in many ways is similar to F1, but completely different too. For example, the cockpit is "hot, sweaty and uncomfortable" in both racers.

"Comparisons with an F1 car are obvious. It’s tough keeping my head still because of the wind buffeting my helmet. The cockpit has all the comforts of a medieval torture chamber and I’m developing Popeye’s forearms in trying to hit the apex of every curve.

I drove an F1 car in 2001 and struggled to cope with the bottomless pit of power on tap. And although Formula E cars can be catapulted to 60mph in three seconds, the 800kW battery developed by Williams provides more than enough kick to keep it wildly entertaining.

Even braking late into a second-gear hairpin, the set of 18in Michelin tyres glue the car to the track. As I accelerate onto the straight, a handful of spent rubber bounces over my crash helmet and HANS (head and neck support) device.

I’m on lap five and it’s only the four paddles on my detachable steering wheel that still require some mastering. They’re so close together that it’s easy to squeeze the wrong one – especially on an uneven stretch of Homestead asphalt."

Driver has two paddles to change gears up and down (five-speed) plus another two - right for energy regeneration and left for FanBoost (additional 30 kW for 5 seconds) available only to drivers with most the votes before the race.

"It’s true that Formula E doesn’t offer ear-splitting decibels, but after experiencing the inside of the cockpit at 140mph, I can tell you that it still screams pure excitement."

"Inside the cockpit, the car is anything but quiet. It sounds like a distant fighter jet under full throttle when you floor the accelerator. However, it’s not all good. A grating whine from the transmission at lower speeds more resembles a British Leyland gearbox."

"The sound of a Formula E car can reach 80 decibels, which is slightly louder than a conventional road vehicle."

The last race winner, Nelson Piquet Junior, was asked about the differences between F1 and FE. He stated:

“Although the two cars look the same, you can’t really compare them. F1 technology has been advancing for 70 years. Twelve months ago, the first Formula E car wasn’t even built.”

“Both cars handle in a similar way, but the driving technique is totally different. In Formula E we only race on street tracks and use one set of all-weather radial tyres. The aim is always to conserve energy, rather than worry about a complicated strategy for taking on fuel and changing tyres.”

“It’s different in the cockpit, too. In F1, you play around with the KERS settings or adjust the angle of the wing. We pay more attention to energy conservation, especially temperature levels around the battery pack, which affect performance.”

Piquet admits that the only electric car he had driven before joining Formula E was a two-hour road test in a Tesla. “I never considered an electric car before, but now I realise that the technology we use in Formula E will accelerate the development of the electric cars we drive on the road,” he says. “I think Formula E is a much purer form of racing, because drivers don’t get constant diagnostic feedback from their team. They are out there on their own, making decisions for themselves.”