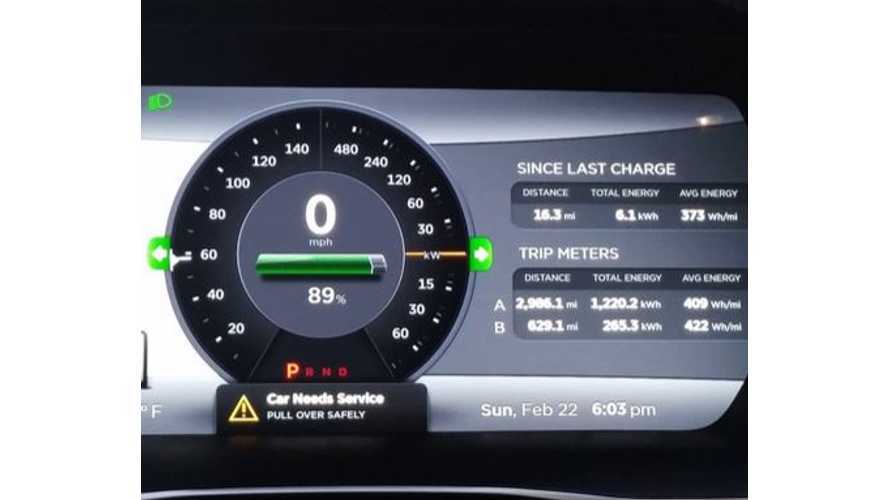 In order to prevent sudden slight power loss, Tesla is advising some P85D owners to avoid using range mode until a more permanent fix is available.

Here's the backstory.  Several dual-motor Model S owners with the most recent firmware 6.1, (with update .167) are experiencing sudden power/torque loss while driving at speed.  The power loss is intermittent and unpredictable, happening at low speeds on up to highway cruising speeds.

UPDATE:  A Tesla spokeswoman let InsideEVs in on the straight scoop on what was happening with the P85D power loss situation - specifically that Tesla is dealing with incidents on a case-by-case basis:

"A small number of dual motor vehicles have experienced reduced torque in a single motor. In each one of the very few cases, vehicle systems remained fully powered and the car continued to be drivable. Tesla is not advising customers to turn off range mode. We are assessing each case to determine the root cause and are working directly with affected customers while we diagnose their vehicle. "

Power loss may leave you in a sticky situation, but what's worse is that the vehicle's regenerative brakes cut out when the power loss is experienced, meaning that some vehicles actually feel as though they speed up (until the brake pedal is depressed or power is regained) when the power loss issue kicks in.

This is a serious problem and Tesla acknowledges that it's an issue.  Again, this only applies to dual-motor Model S EVs with firmware version 6.1 (with update .167).  Tesla's engineering team, having been alerted to this issue.

Update: Model S owners who were experiencing this problem state that the sudden power loss issue never pops up as long as range mode isn't selected.  Of course, this is only a temporary fix.  Tesla will have to address this with a software patch of some sort, but be advised that for the time being, if you own an 85D or P85D with update .167, we suggest you avoid range mode at all times.

Tesla claims that the affected vehicles are safe to drive until the more permanent fix gets pushed through, but we all know there's nothing safe about losing power out on the open road. Even Ford reluctantly admitted that it's issue with power loss wasn't safe.

Let's hope a permanent fix is in place within a few days, or else that dreaded R word might start getting tossed around.