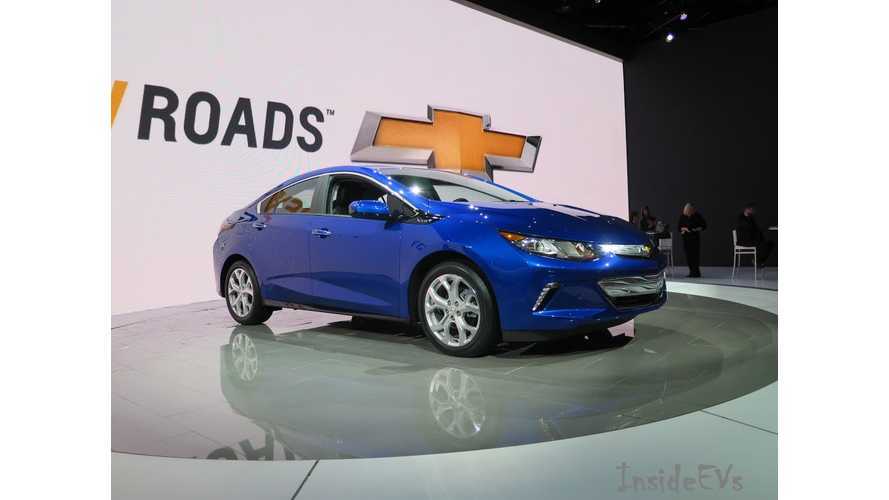 There's a lot of great enhancements in the new 2016 Chevrolet Volt, and many people (myself included) are excited at the potential that the new Volt holds to gain  mainstream market appeal.

That being said, there's a couple key areas where I feel Chevrolet missed the mark in choosing not to address them.  I'll discuss those here, along with why I believe this.  It's my hope that Chevrolet also reads this article, and truly considers changing their stance on these items in the future... and if they do read this article, perhaps they'll consider hiring me as their chief electric vehicle marketing officer... MBA, MSEE, and "Voltec Passion" credentials available upon request!  Shameless personal advertising aside, I'm looking to you - the readers - to confirm or deny my assertions below.

With a longer range Volt, Engine Running Due to Temperature will be a greater source of gasoline use.

Engine Running due to Temperature (ERDTT) Debated often, this point of contention is often referred to as a horse that's been beaten to death repeatedly, due to how often an alleged vocal minority raises the concern.

For those that don't know, ERDTT is a somewhat controversial mode for a vocal few, where the engine turns on purely to help heat and defrost the passenger cabin more quickly.  This is currently implemented such that the engine will initially turn on as a function of outdoor temperature (below 35F or 15F depending on user setting), heats up the full coolant loop via the engine's waste heat, and then turns off the engine.  Subsequent engine runs are based on the coolant temperature.

(It's worth noting that, above the user set temperature, the Volt has a resistive heater to heat a smaller coolant loop for cabin heating.  This prevents the engine running at higher temperatures when heat is desired.  This alone does avoid a lot of gasoline/engine use, as other PHEV's like the Toyota Prius Plug-in require the engine to be running whenever cabin heat is desired.)

I personally recognize the benefits to the ERDTT mode: many people that could care less about burning a small amount of gasoline will see a smaller decrease in all-electric range in the winter, and also potentially be more comfortable/warm during their drive.  Also, if you're driving a greater distance than the Volt's all-electric range, this mode allows you to travel further on battery overall, using the engine to create heat instead of those precious electrons.

However, the mode results in burning infinitely more gas than one would otherwise burn for trips that do not exceed the all-electric range, and that's what is frustrating to those of us addicted to the silent EV drive that the Volt typically provides.  I'm happy to have the default setting use ERDTT for the "mass market" that may not care, but there seems to be no real excuse for not providing the flexibility to disable it.

This Tag Line is Mostly True, and the Volt Avoids Gas Far More than Other PHEV's

GM argues they need this mode to satisfy NHTSA rules and regulations.  A vocal minority argue that the mode causes them to burn gasoline when they still have battery available.  Neither side will budge.

The part that bothers me most here is that I claim GM is effectively turning away a large percentage of the market.  I say this because GM has constantly touted how the Volt allows drivers to drive the majority of time on electricity alone, without gas use. Furthermore, they cite numerous surveys where owners crave that even more.  "More electric miles!" is what they all exclaim, which is why the 2016 Volt will have 50 EPA estimated electric miles before the gasoline engine has to kick in to travel further... unless it's below 35F or 15F out.

If everyone wants more electric miles, why leave ERDTT implemented in the same manner, which effectively prevents the population in the northern climates from having more electric miles?  While it may be a vocal minority that is against this mode, I would argue that some people who want that "all electric" feel the majority of the time will be swayed away from the Volt because of this mode.  I, like others, do not enjoy making a 6 mile trip when I have 30 miles of battery range, only to have the engine come on for a short period of time because of an arbitrary temperature set point.  It is even more frustrating to be a fraction of a mile from home, entering into my suburb that can be a few degrees colder than the surrounding area, and having my engine turn on for a whopping 30 seconds.  Sure, it didn't burn much gas, but it can't be good for the engine either, and it certainly didn't help heat the cabin in that amount of time.

As another example of this flawed operation, I can have my Volt plugged in, perform a remote start in 10 degree weather, and have the cabin get nice and toasty warm without the engine running (you can set ERDTT to be disabled when the vehicle is plugged in).  Then, as soon as I unplug my toasty warm Volt, it turns the engine on because the outside temperature is under 15F (I have ERDTT set to the colder setting).  My cabin is already nice and hot, as is the coolant loop, so this doesn't seem useful at all.

While studies have also shown that the Volt's EREV architecture travels far more on electricity alone than other plug-in hybrids that need the engine for full acceleration, they could improve this even more by re-thinking ERDTT.  If GM must have this mode per NHTSA regulations, can't they at least compromise? How about designing it such that the engine doesn't come on right after a remote start with a very warm cabin?  In other words, based on the coolant temperature of the inner (resistive heating element) coolant loop for the first engine run, just like what happens for subsequent engine runs.  Or perhaps they could allow a configuration setting that would always prompt the user to override ERDTT, warning that it will reduce the heating and defrost effectiveness, and result in decreased electric range.

These seem like acceptable compromises that would stop the user base from complaining.  It's a small point, but noteworthy nevertheless.  GM, you've got us all hooked on using electricity alone, can't you help us satisfy that craving by meeting us halfway in some manner?

Optional 6.6kW Charging I'm not one that would use this much, but an option to purchase a larger 6.6kW charger seems like an easy way to satisfy a larger percentage of consumers. There's a few reasons why this would be beneficial.

First, let's go back to the fact that survey after survey says people love the Volt, and their number one request is to have even more electric miles before the gas engine kicks in to drive further.  This craving is despite the fact that the Volt has the greatest EV range of any vehicle in its class, well above the Plug-in Prius and Ford PHEVs.

Allowing for a paid option to upgrade the charger allows people to effectively get more electric range out of the same battery.  A 6.6kW charger would charge the battery quickly enough to get a meaningful amount of EV miles while eating at a restaurant or shopping at a mall... much more so than the designed-primarily-for-overnight-charging 3.3kW charger.

Secondly, a 6.6kW charger allows for more effective use of the thousands of public Level 2 charging stations available today throughout the country.  Nearly all of these charging stations can provide up to 6.6kW of power.  Furthermore, the price to charge is often set assuming a 6.6kW rate.  With a 3.3kW charger, many of these public charging stations become more expensive than the gasoline required to travel the same distance.

GM themselves note from surveys that people charge, on average,  more than once a day.  That suggests to me that they want the ability to gain more electric miles from charging, and an optional 6.6kW charger provides them with that flexibility.

Instead, GM chose to highlight that roughly half of their existing owners only use their slower, Level 1 EVSE that charges at about 1.5kW.  This is an unfortunate example of misinterpreting statistics.  Those owners using the slower charger may be doing so because the faster 3.3kW charging is not a sufficient increase in speed to justify the hassle or cost.  What about the other 50% of owners?

Furthermore, analyzing statistics of existing customers completely ignores the desires of potential customers.  Here again, a slice of the market may avoid the Volt over the lack of a 6.6kW option; an option that, in my opinion, could be easily offered without compromising the vehicle's design.  The battery is certainly very capable of accepting this charge rate.  It seems ill conceived (and certainly not statistically relevant) to use 50% of  your existing consumer base to justify what 100% of the broader market wants.

Summary So there you have it, my two major gripes with the new 2016 Chevrolet Volt.  Admittedly, they're small things to pick on, which highlights the good design being put forth.  However, they're two areas that negatively affect the vehicle's appeal to a percentage of the potential market share, that could be solved relatively easily.  Given that these items are much less difficult to implement than a brand new dual motor integrated transmission, it seems like an unfortunate oversight.  This "low hanging fruit" would provide even more appeal, further setting the Volt apart from the competition.