Plug-In Electric Car Sales In UK Went Through The Roof - 6,000 In March! 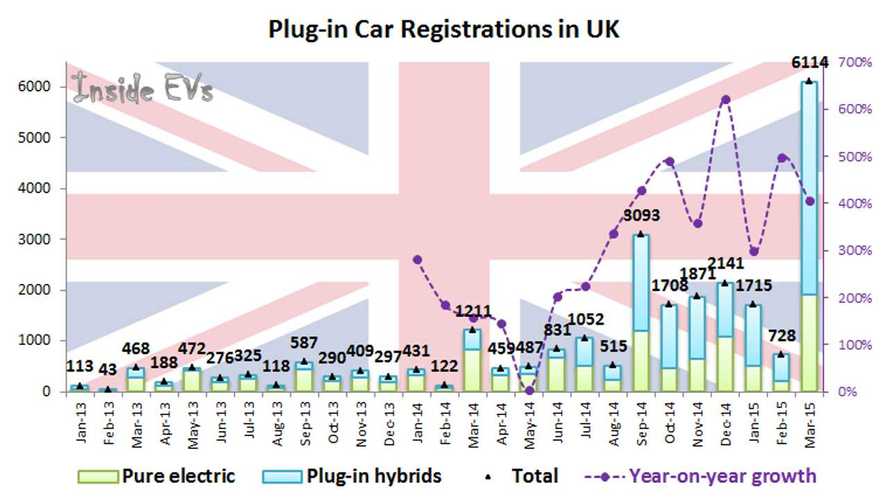 Number plate changes in March and September always raise car sales in the UK and that was no different last month.

This is over 400% more than in March 2014 and the registrations bar jumped off our graph scale!

Market share for plug-ins exceeded 1.2% of all new car registrations.

The big winner is Mitsubishi, which said that 55% of all plug-ins sold in the UK in March (3,300) were Outlander PHEVs!

"Mitsubishi Motors (UK) confirmed earlier this month that exactly a year after its launch, the Outlander PHEV has now overtaken every other plug-in hybrid and pure-electric vehicle, including the Nissan Leaf and the Toyota Auris and Yaris hybrids. The Outlander PHEV accounted for 55% of the plug-in car market in the month of March."

“For Mitsubishi, 2014 has been an incredible year of dramatic growth across the Mitsubishi range. We have made impressive and sustainable progress, and as confirmed last week, we are delighted to have broken records with the launch of the UK’s best-selling hybrid vehicle. There is a great feeling across the Mitsubishi network – FY14/15 has been a very special year.”

Nissan can be happy too, as 1,254 LEAFs were delivered.