BMW X5 xDrive40e To Get World Debut At Auto Shanghai 2015 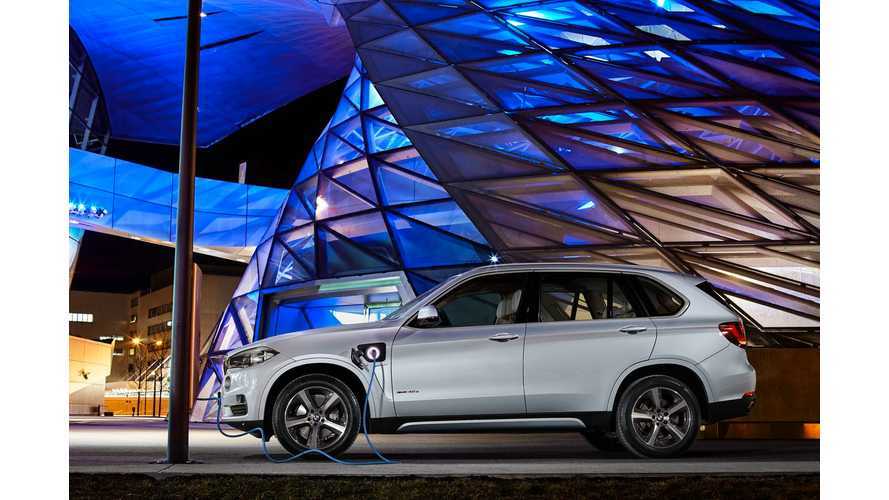 "The first plug-in hybrid production car from the BMW core brand is a Sports Activity Vehicle, and it is celebrating its world premiere in Shanghai. Permanent all-wheel drive and the BMW EfficientDynamics eDrive technology endow the BMW X5 xDrive40e with sensational sportiness and supreme poise on the one hand and outstanding efficiency on the other. With a total system output of 230 kW/313 hp generated by a four-cylinder petrol engine with BMW TwinPower Turbo technology and a synchronous electric motor, the BMW X5 xDrive40e achieves a combined fuel consumption of 3.4 – 3.3 litres per 100 kilometres (83.1 – 85.6 mpg imp) and a combined electricity consumption of 15.4 – 15.3 kWh over the same distance. CO2 emissions come in at 78 – 77 grams per kilometre (figures according to ECE test cycle for plug-in hybrid vehicles, may vary depending on the tyre format specified)."

Sales in the US are scheduled for this Fall. EPA range using 9.0 kWh battery stands at 13 miles.

Synchronous electric motor integrated in the 8-speed Steptronic transmission together with a four-cylinder gasoline engine can propel the BMW X5 xDrive40e from 0 to 60 mph in 6.5 seconds and onto a 130 mph top speed (75 miles per hour in all-electric mode).