A Chevrolet Volt Owner's Take On The BMW i3 REx 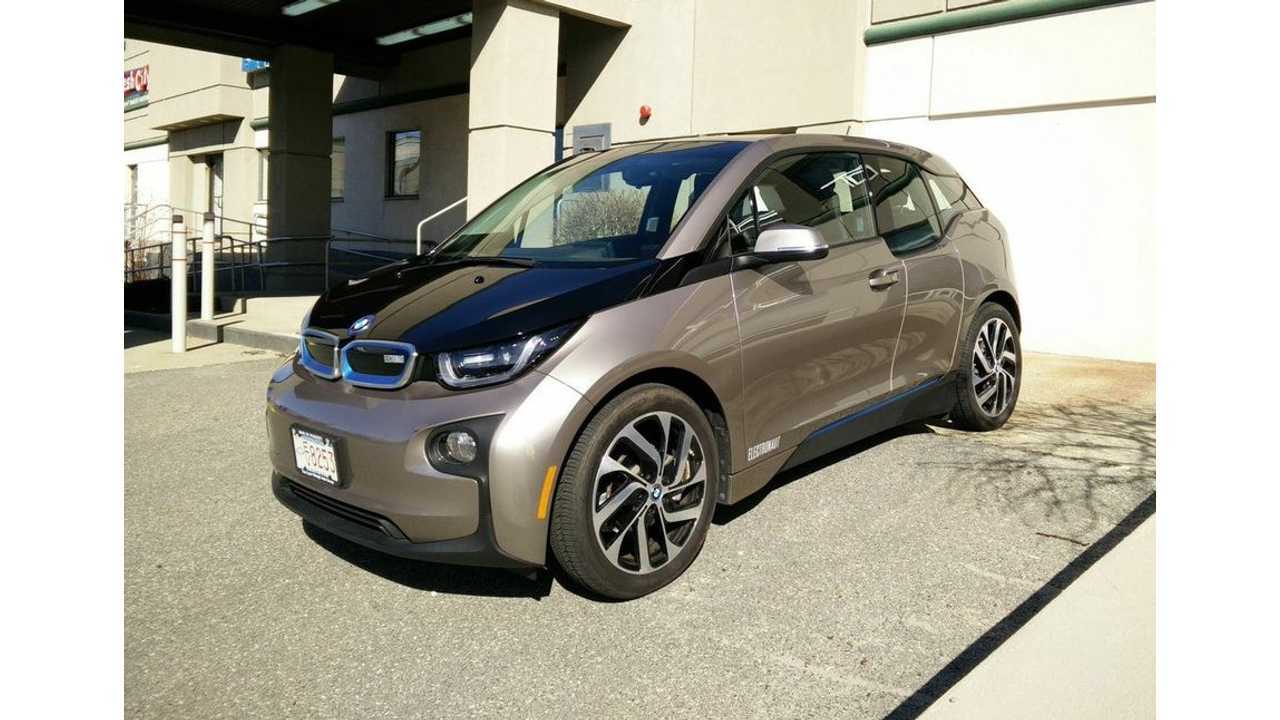 While watching Tested.com’s review of the i3 a couple weeks back, I noticed their test car had stickers on it that mentioned an “Extended Test Drive”. After a little Googling, I found out that you can fill out a form on BMW’s site, and your local BMW will hand you an i3 for a few days. How could I say no? I filled out the form in the afternoon, and heard from BMW Peabody that night. I picked up the i3 REx (range extended version) a few days later. Awesome!

Editor's Note:  Special thanks to InsideEVs' community member (and Chevy Volt owner) Sean for taking the time to review the BMW i3

Rather than go into a lot of detail about both cars, I want to do a quick comparison of the two cars, and which car (in my opinion) “wins” in certain categories.

- Much, much faster than the Volt. The i3 is an absolute riot to drive, and reminds me a lot of the VW GTi in terms of acceleration and general fun-factor.

- Much, much more responsive than the Volt in steering, braking, and acceleration (even the Volt in sport mode isn’t as responsive). Has the typical “BMW feel”, which is great.

- The cabin feels a lot more open than the Volt, much more glass to look through. Like the Volt though, there are some blind spots. You also sit higher than in the Volt, and can see over some smaller sedans.<

- Tons of places to store stuff in the cabin. I wish GM would ditch the traditional tunnel-mounted shifter. That space could be better utilized.

BMW i3 Charging Abilities Get The Nod Over The Chevrolet Volt

- The brake regen is MUCH stronger than the Volt in L mode. And the fact that the i3 doesn’t “creep” like a traditional automatic, you can truly one-foot-drive the i3. I rarely had to use the friction brakes at all.

- The rear doors make the back seat slightly easier to get a child seat into. Much more rear-seat headroom too.

- You have to drive like a hoon to get the i3′s battery to drain quickly. This one is sort of a “duh” since the battery is far larger than the Volt, but still.

- The Level 1 120v charger that comes with the i3 is TINY compared to the bulky one the Volt comes with.

- The charge ports are lit!!

- The i3 will actually remember your charge level settings (the Volt always goes back to 8 amps when you shut the car off). You also have more choice when it comes to the amperage the i3 can pull from both level 1 and level 2 chargers.

- The Volt’s seats are more comfortable

- The Volt is quieter on-road than the i3. Even with snow tires!

- The Volt feels a bit more surefooted around corners and on the highway. I’m chalking this up to the fact that the Volt uses tires with some actual width to them. The i3 has comically narrow wheels/tires. The Volt is also a lot heavier than the i3, which both hurts and helps it.

- The Volt’s user interface is a lot clearer and easier to read than the i3. Though the Volt’s awful “washing machine panel” buttons are much worse than the i3′s traditional buttons.

- I also prefer the layout of the Volt’s menus to the i3. BMW menus go far too deep, and often require the iDrive “option” button.

- The Volt has a lot more cargo space in the hatch area.

- The range extender in the Volt is quieter than the i3′s REx motor.

- Volt has a larger gas tank (i3 is just 1.9 gallons in the US, 2.4 gallons elsewhere). Kind of moot since I never use gas, but worth mentioning.

- The Volt has a better factory stereo. The i3's base speaker package is only two speakers up front, and they are pretty bad. Like, surprisingly bad. A $47k car should never come with speakers that sound that bad. I’ve heard the $800 HK system sounds nice. As it should for $800…

Now, it sounds like the upcoming 2016 Volt is going to “fix” a lot of the areas the i3 currently “wins”. Sadly the 2016 Volt is still going to be too damn heavy, and still doesn’t get enough pure electric range. Oh well.

In closing, had I know how cheap the current lease deals are on the i3, I probably would have leased one instead of the Volt.

If anyone has any specific questions please feel free to ask. I’m sure I’ve forgotten to mention things.