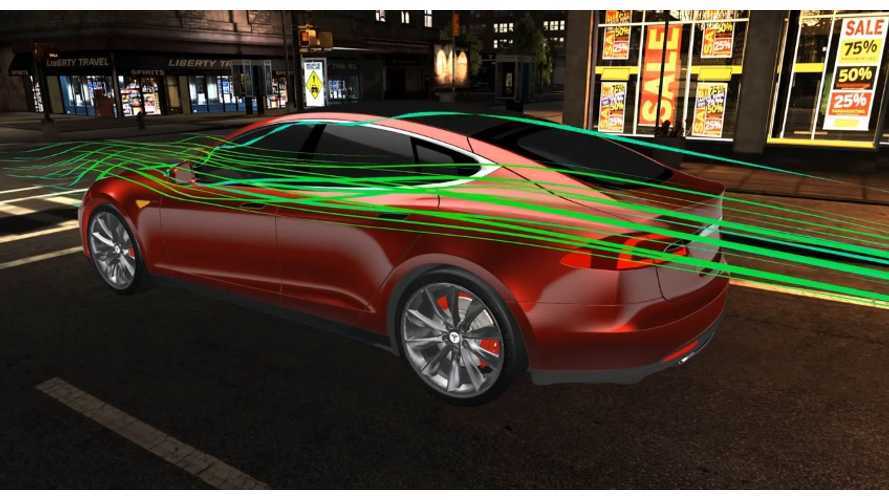 Exa software was used to explore the flow field around the Tesla Model S. Areas of higher drag are shown in red.

Tesla Model S has a drag coefficient of just 0.24, one of the lowest among cars available today and very important to the extend range of the car.

Now we find out that  Tesla was developing the Model S using computer simulations. Without these simulations and the incremental improvements that came from this, the Model S' aerodynamics likely wouldn't have been refined so quickly and possibly wouldn't be at the impressive level we see today.

In an article from 2013, we read that everything begins with a conventional steady-state CFD code that uses the Reynolds Averaged Navier Stokes (RANS) approach to define the eddy viscosity on all scales of turbulent motion.

“The results did not match our expectations, so we switched to PowerFLOW, which uses a fundamentally transient solver and sophisticated lattice-Boltzmann physics models to directly resolve anisotropic turbulence scales. We had confidence based on validation and prior correlation with physical tests that PowerFLOW simulations were an accurate representation of the aerodynamics.”

“We used Exa’s PowerFLOW transient solver that directly resolves very large eddies to deliver superior accuracy compared to conventional CFD codes. This approach is especially beneficial in areas where flow physics are complex such as in the rear of a curved vehicle. The result is a full-size electric sedan with a drag coefficient of 0.24.”

Wheels alone can generate up to 20% of the drag on the vehicle, while rear-view mirrors another few percent. This would indicate that cameras can extend range by up to about 5%, but at the moment we're thinking it will be hard to get rid of the wheels.

“The drag coefficient of early design concepts of the Model S was 0.32. The major shape changes reduced the drag to 0.27, and the smaller changes provided further improvement to 0.24. These numbers were validated with wind tunnel testing using standard SAE International procedures, and extended using CFD modeling to add in factors that are not traditionally included, due to practical limitations in experimental testing, but do contribute to the on-road drag of the car.”