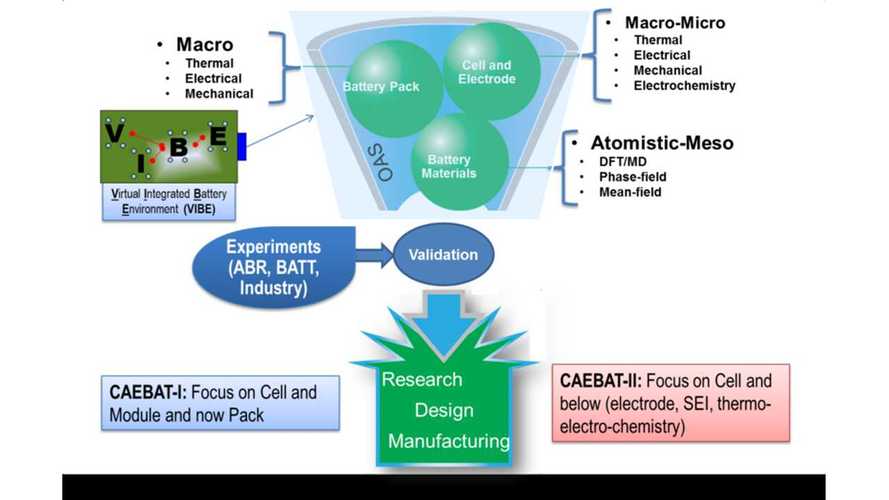 We got some news that some new software has been developed to allow battery developers to run detailed simulations of everything from the cycle life and energy delivery of batteries to the nano-level chemistry changed going on within the cells themselves.  Via Green Car Congress:

"The Virtual Integrated Battery Environment (VIBE) allows researchers to test lithium-ion batteries under different simulated scenarios before the batteries are built and used in electric vehicles. The physics phenomena of interest include charge and thermal transport; electrochemical reactions; and mechanical stresses. They operate and interact across the porous 3D structure of the electrodes (cathodes and anodes); the solid or liquid electrolyte system; and the other battery components. VIBE was developed by researchers in ORNL’s Computational Engineering & Energy Sciences group, led by Dr. John Turner."

Now, if you've been paying attention, and also happened to have read The Powerhouse, this may sound vaguely familiar.

Around 2012 or so, in an effort to bolster the Argonne National Lab's work developing, and for the first time validating research centered around battery chemistry testing and modeling, (and positioning the lab to be the host of the "Battery Hub" - a nationwide collaboration of research teams known as the Joint Center for Energy Storage Research - which they won), the team at Argonne began working on a battery modeling system with Paul Neslon at the lead.  Here's a bit about how at least a part of that looks: The Collaboration of Oak Ridge, Argonne, and Livermore (CORAL) :

"The Collaboration of Oak Ridge, Argonne, and Livermore (CORAL) is a joint procurement activity among three of the Department of Energy’s National Laboratories launched in 2014 to build state-of-the-art high-performance computing technologies that are essential for supporting U.S. national nuclear security and are key tools used for technology advancement and scientific discovery."

There's a little more readable explanation of the recent VIBE-related developments here, on the ORNL site:

"DOE started the CAEBAT program in 2010, and ORNL had a limited release of the software in 2012. The 2014 release includes many enhancements in both physics capabilities and usability.

“We learned a lot from the first release, got some feedback, built on it and added a lot of new capability in this release,” Pannala said.

“No previous tool has provided this level of integration between the various physics components,” Pannala said. “This program is bridging the gap between theory and experiment, so that you can now design a battery cell and integrate all the associated processes in order to more accurately predict performance.”

Modeling the nano-chemistry of electrodes

Rather than a breakthrough, this appears to be simply another step towards the completion of a modeling system that was developed by Nelson, who had worked at Argonne since 1958.  The pattern that had developed was to "propose a new chemistry, obtain funding, prove (or fail to) that it worked in coin cells, write a paper, garner any accolades, then move on to the next thing..." (The Powerhouse, Steve Levine, p.211).  Nelson, and then in collaboration with Kevin Gallagher, developed what was called "The Nelson-Gallagher Model" to allow at least a simulation of full-scale real-world testing once a chemistry was brought to a point.

For a look at one of the reports coming from that work, take a look at Modeling the Performance and Cost of Lithium-Ion Batteries for Electric-Drive Vehicles (pdf) a 2011 paper, for a taste.  If you're interested in reading a little more, you can wander over to Amazon and pick up Lithium-Ion Batteries: Advances and Applications ...for a cool $224.54.  The book leans heavily on the work done by Nelson and Gallagher.

But back to the software itself.  For a good overview, albeit somewhat tough to comprehend from a layman's perspective, go over to batterysim.org - the site devoted to, and making available, the actual software.  There you'll get a good overview of all the separate components of the project, and how they fit together:

Had enough battery geekout?  If not, be sure to check out this report which is a FY 2013 Annual Progress Report including the work of Kevin G. Gallagher, Paul A. Nelson, (Shabbir Ahmed & Dennis W. Dees) at Argonne; Jeremy Neubauer of the National Renewable Energy Laboratory (NREL); Kandler Smith, also of the National Renewable Energy Laboratory, a ton of others as well as Brian Cunningham, VTO Program Manager Subcontractor: ORNL and John A. Turner, Program Manager (Computational Engineering and Energy Sciences Group) from the Oak Ridge National Lab. ...where they address their current work in:

o Cost modeling. o Secondary and other energy storage use and life studies. o Analysis of the recycling of core materials. o Requirements analysis for PEVs and HEVs.

o development of tools for computer aided engineering of batteries.