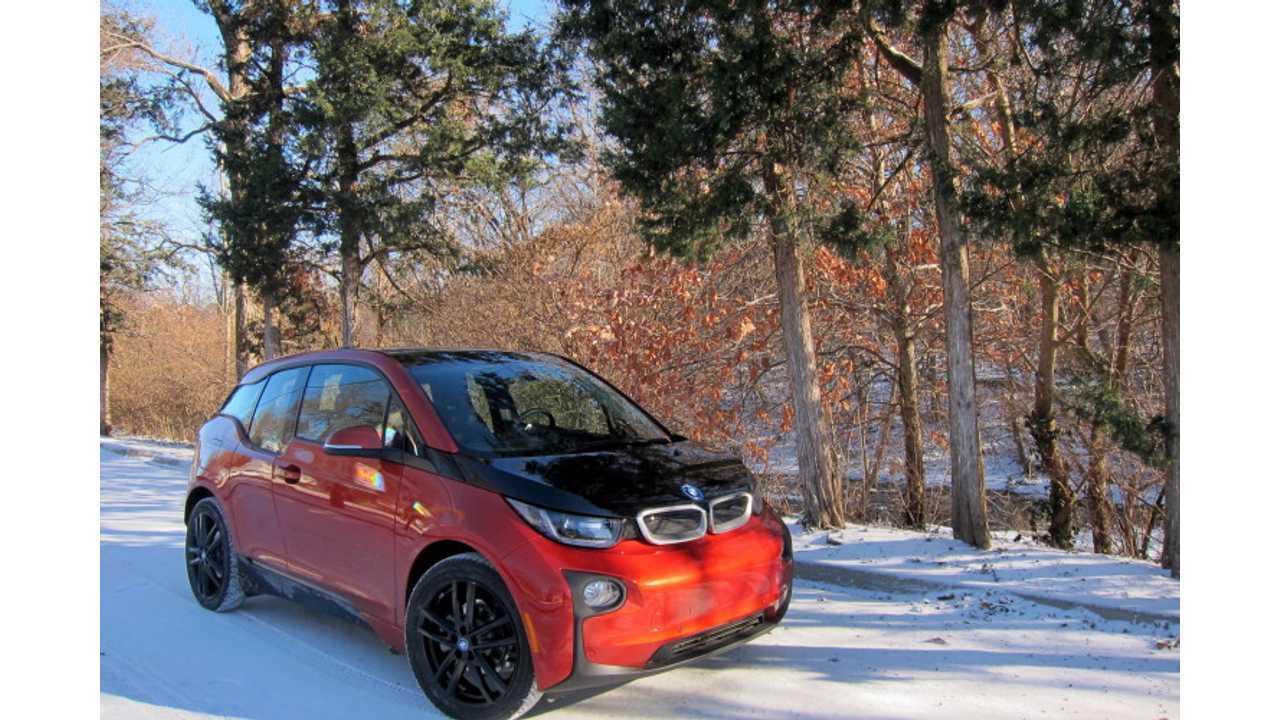 BMW i3 With Winter Tires

Six months ago when it came to winter tires for the new BMW i3, there was only one choice, the Bridgestone Blizzak LM-500 and in just one size. Economics say the more choices, the better for the consumer; competition keeps prices in check and stimulates new development in tire compounds.

Then in December, Nokian, a Finnish tire company, who makes some of the best snow tires in the world, came out with an all-new winter tire designed specifically for the BMW i3.

I3 With Winter Tire

Currently, BMW offers three different tire/wheel combos for the i3.  These are the optional summer tires on 20 inch wheels, a non-staggered set of 19 inches on the base i3 BEV, and a staggered 19 inch set up on the rest. Our BMW i3 came with the Tera World Package and the staggered set up of 155/70/19s in the front and 175/60/19s in the rear on all season tires. For both sets of snow tires, the BMW i3 runs 155/70/19 front and back.  The benefit here is that you can rotate the tires front to back to balance their wear.

Here’s our impression on both brands of snow tires available for the i3, having spent the winter driving BMWBLOG’s long-term i3  BEV through the snow, ice and the arctic blasts sub-zero temperatures.

Nokian Hakkapeliitta R2 is the world’s first winter tire with an “A” energy rating.  Nokian’s R2 snow tire has a thirty percent lower rolling resistance, thus, helping maximize electric car’s range. When you grab the deep 12mm tread of the Nokian Hakkapeliitta R2, you can feel that the R2 has very pliable tire sipes to grab snow and ice. 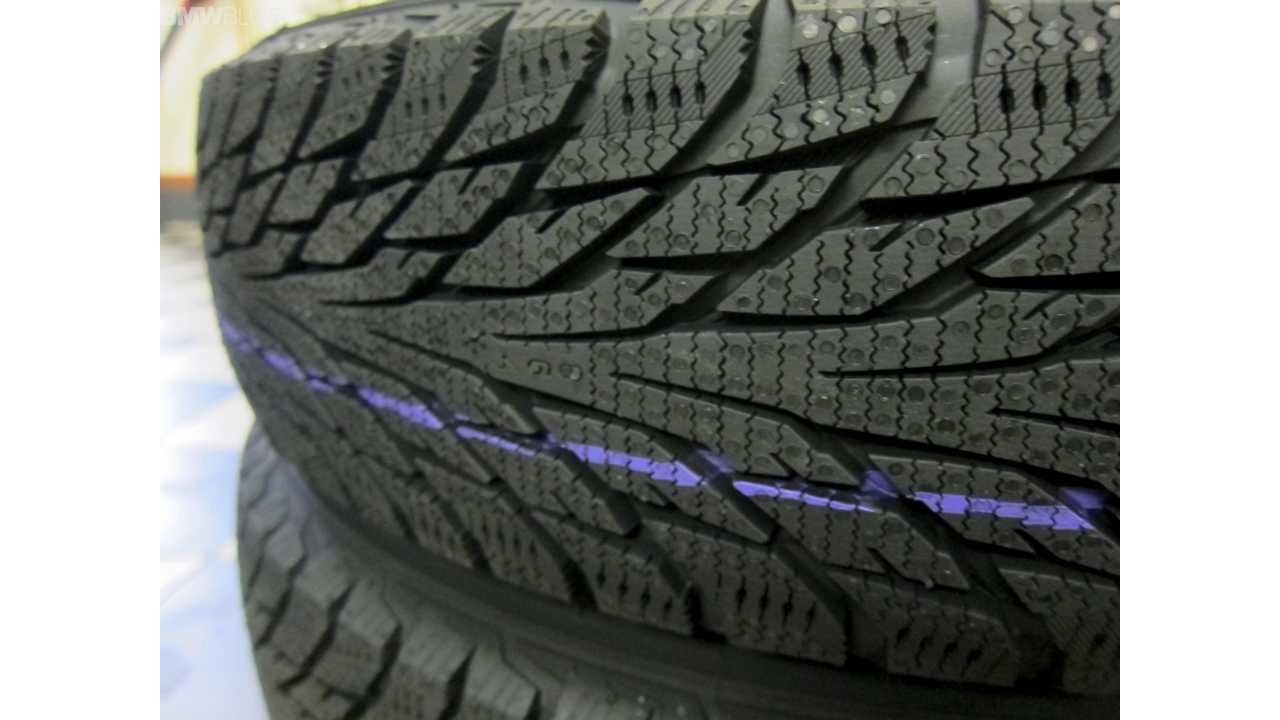 Nokia calls this an eSilica compound that is strong but flexible combo. The more a winter tire grabs the snow and ice the better the control and performance you can expect.

I’ve owned very pliable sipes snow tires, the Bridgestone Blizzak WS and Michelin Arctic Alpin.  Though excellent snow tires, they tend to wander on the freeway and give the steering vague feedback.  Not so with the Nokian R2, its highway performance in the dry gives a normal driver feedback through the week and tracked true on our i3. 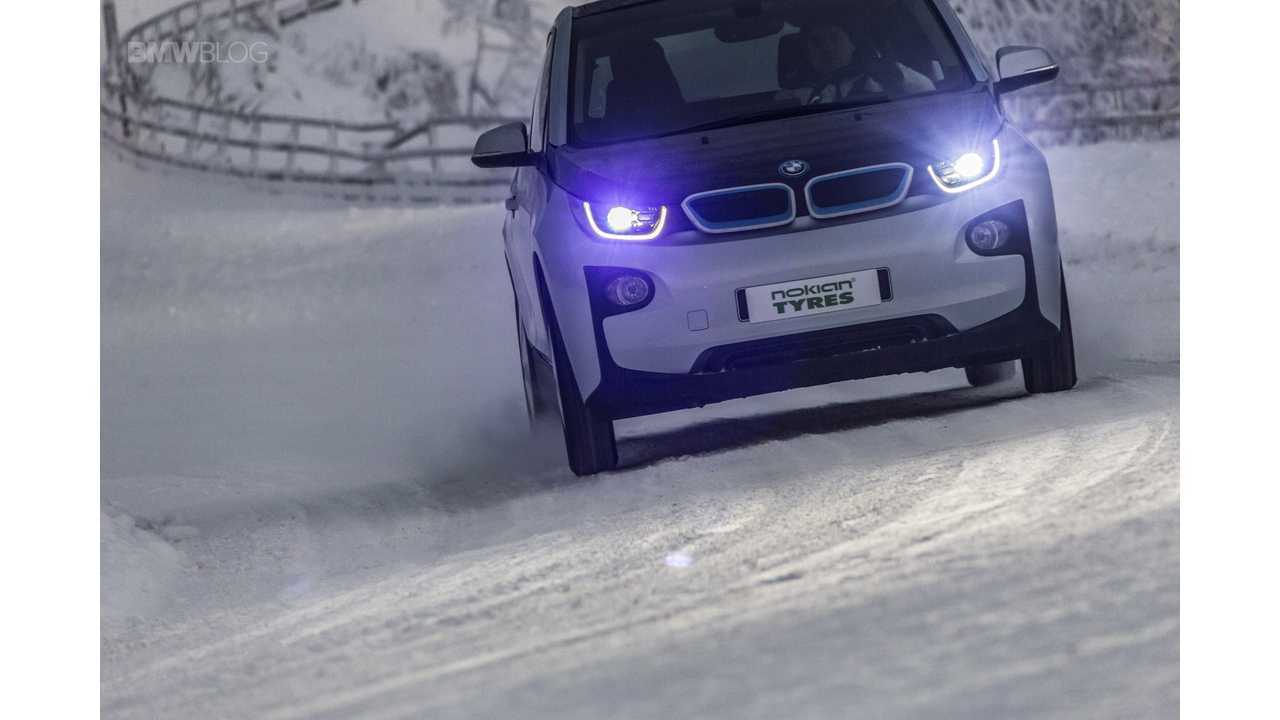 When it comes to snow, the Nokians are, not surprisingly, excellent performers. We never had any difficulty getting around in the snow in our i3 be it slushy, powdery or icy.  The tread pattern of the R2 is angled in a V to help shed snow slush and wick water away. With so much torque it’s still easy to break the rear end loose on the i3.

However, with the i3 set to EcoPro and patient application of the throttle, we never got stuck.

The one thing revealed by soft tires and the massive instant torque of electric cars was greater tire wear on the back tires where all the BMW i3’s power is put down.  The Nokians wore about 2mm more on the back than they did in the front.

The R2 has a very handy 4-6-8 tread depth marker in the center of the tread. When the number is worn off, that depth is gone.  I used my tire depth gauge to confirm that them marks were indeed accurate.

I must admit that our local road crews did do a good job clearing the roads rather quickly, so the Nokians we had were run on the pavement more than on just snow.  Perhaps if they were run on snow more, or I could control my desire to feel that wicked and instant rush of electric motor acceleration and quit giving test drives, the Nokians would not have worn down as much.

As Bridgestone initially had a monopoly on snow tires for the BMW i3, I was expecting to get hammered on them when BMWBLOG bought our set back in November.  Surprisingly, they were reasonably priced at $124 each of the155/70/19s. The Bridgestone Blizzak LM-500s fall in the Performance Winter/Snow category. What this means, is that the these are a little stiffer tread on them compared to the Nokian. The stiffer tread will also wear a little slower than a softer compound like that found on the Nokians. The trade off is that you loose a little winter performance on icy roads and can have a little more slippage on the snow.

Bridgestone states the Blizzak LM-500 has revolutionary “Ologic technology, which capitalizes on the synergies of a large diameter coupled with a narrow tread design. The result is a tire that “delivers significant improvements in aerodynamics and rolling resistance, while still offering outstanding grip in wet weather conditions.”  Though this statement implies this technology is unique to Bridgestone, it’s a function of the tire size which is built to BMW specifications. 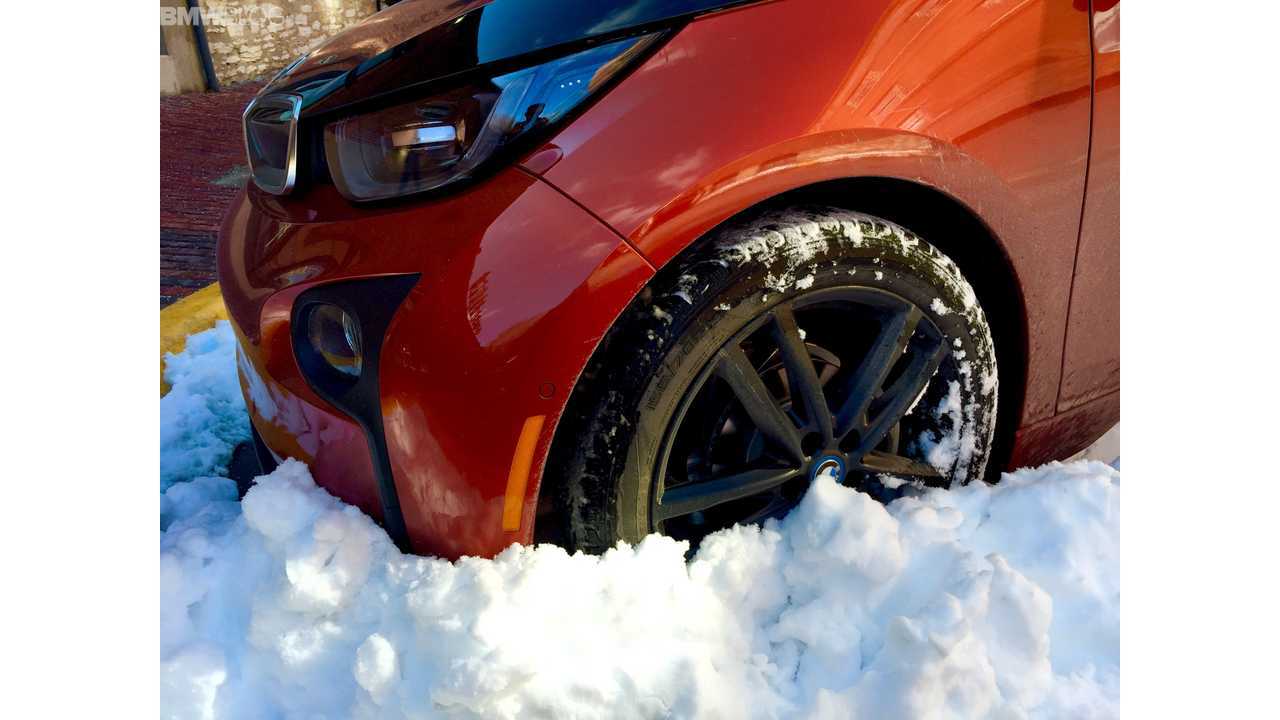 We initially started the winter out with the Brigestones and got hit with a six inches snow and headed out early before the snow plows hit. I was impressed how easily these narrow snow tires cut through the snow and how well they would stop and turn. If I went nuts with acceleration or pitched the i3 sideways, it would slide but it took some effort.

The dry road performance in the freezing temperatures was excellent and very much mimicked the stock all seasons. Feedback through the wheel was excellent. Grabbing the tread of the Blizzak LM500, you can feel they are definitely a stiffer tread and not as pliable as the Nokkian R2s.

And the winner is…

I am a huge proponent of snow tires.  If your i3 has the 20 inch wheels and the performance summer tires, you really need a set of snow tires if you drive your i3 in the snow. When it comes down to which of the two snow tires available for the i3 to choose, I say it really depends where you live. Both are directional V-tread snow tires that shed snow, slush and water well. Both provide much more aggressive and deeper snow tread than either the all seasons or summer tires provide.

When it comes down to it, we recommend the Nokian R2 if you live somewhere that gets a ton of snow, like Colorado or Boston.  If you are somewhere that gets less than 30 inches of snow a winter or do a ton of freeway driving, I’d go for the Blizzaks. The Nokians are going to give you better winter performance and do offer the lower rolling resistance rating. However they are going to wear faster than the Blizzaks. Either set is much, much safer than the tires that come standard on the i3 in the snow. The Germans believe snow tires are very important for safety and the law requires to run on winter tires.

Truthfully, I was a little apprehensive about how the i3 would perform in the winter.  The i3 has so much instant torque that it was still easy to brake the back-end loose under acceleration.  However, when engaging EcoPro and being gentle with the throttle, we never got stuck. Buying either set of snow tires is worth it if you depend on your i3 to get you to work in the winter.