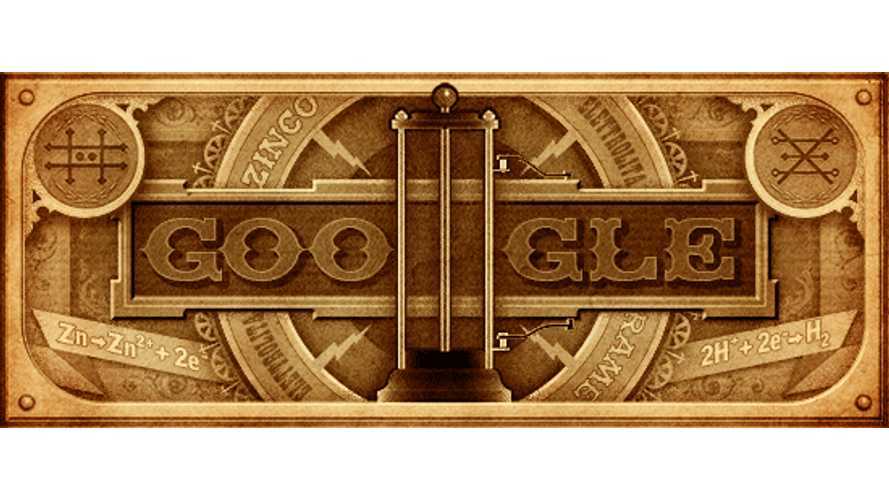 February 18, 2015 was Alessandro Volta's 270th birthday, and Google celebrated with this awesome animated "doodle" for the day.  Google keeps an archive of doodles, here, and you can read the details of how this was designed, here, in the artist Mark Holmes's own words. It's only Holmes' second doodle for Google, and shows a lot of interesting historic research on Volta, and imagery relating to the man's work.  In Holmes' words:

"Experimenting with different metals and solutions, Volta ended up creating the first electric battery: the Voltaic Pile, a stack of alternating metal discs separated by cardboard and cloth soaked with seawater. But what made this battery so remarkable was that it was easy to construct out of common materials and enabled experimenters for the first time to produce steady, predictable flows of electricity. Within just weeks it inspired a wave of discoveries and inventions and ushered in a new age of electrical science."

Volta was responsible for a host of electricity-related developments, and others.  For a complete biography, check out this page on www.famousscitentists.org:  Alessandro Volta.

Stuff he did included:

• Invented the first electric battery – which people then called the “voltaic pile” – in 1800. Using his invention, scientists were able to produce steady flows of electric current for the first time, unleashing a wave of new discoveries and technologies.

• Was the first person to isolate methane.

• Discovered methane mixed with air could be exploded using an electric spark: this is the basis of the internal combustion engine.

• Wrote the first electromotive series. This showed, from highest to lowest, the voltages that different metals can produce in a battery. (We now talk of standard electrode potentials, meaning roughly the same thing.)

• Discovered that electric potential in a capacitor is directly proportional to electric charge.

Born in Como, Lombardy, Italy, on February 18, 1745, Volta hung out with the likes of two leading physicists working with electricity: Jean-Antoine Nollet in Paris, and Giambatista Beccaria, and in 1769 published a dissertation titled On the Attractive Force of the Electric Fire, and on the Phenomena Dependent On It, which he sent to Beccaria. The paper discussed the causes of electrical attraction and repulsion and compared these with gravity. "He set out his position that, like gravity, static electricity involved action at a distance. The main scientists influencing his thinking were Isaac Newton, Roger Boscovich, Benjamin Franklin and Giambatista Beccaria himself."

An illustration from Volta’s 1800 paper. Pieces of silver (A) and zinc (Z) connected by metal strips and sitting in cups of dilute acid will produce electricity.

His development of the storage battery began with a look at the work of fellow Italian physicist Luigi Galvani, and the ultimate disproof of his "animal electricity" theory describing the motion of frog's legs subjected to an electric charge.

He also believed that animals such as electric eels could build up extra amounts of this fluid and use it to deliver electric shocks.

Galvani concluded that animal electricity was similar to static electricity, but it was different and was a unique property of living things.