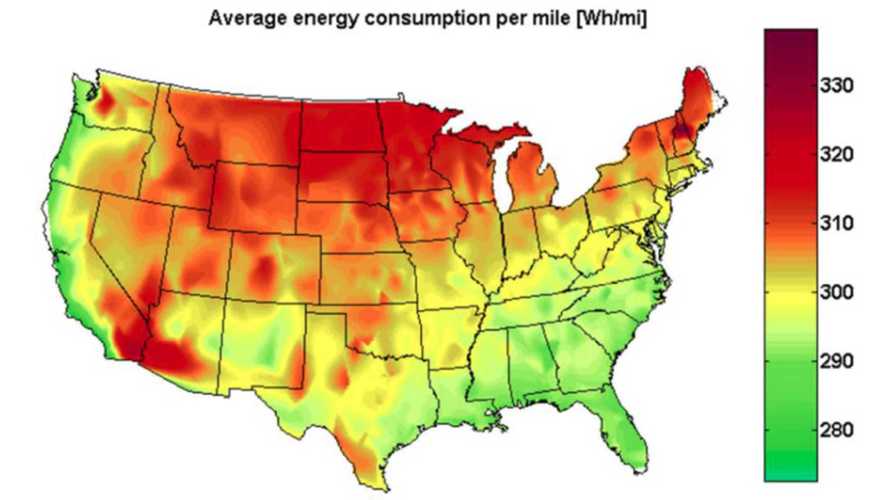 According to the summary on Green Car Congress, the effect of temperature is significant and varies depending on location. In general, energy consumption in Northern states will be higher.

The best environment for electric cars are moderate temperatures.

When the temperatures are high, air conditioning (A/C) consumes part of the energy, thus lowering range and increasing Wh/mi.

In the cold, additional energy from the battery is needed for heat and the batteries themselves have lower efficiency, so the overall effect is even stronger.

Based on the real-world data for the fleet of Nissan LEAFs, the impact could be up to 40%. Results could be slightly different for other cars.

"Ambient temperature determines initial battery temperature and thermal management loading (if the vehicle is parked outside, the battery is not thermally preconditioned, and solar radiation is negligible) as well as battery temperature and thermal management load during use. Weather conditions, therefore, have a direct impact on battery efficiency. Ambient temperature also drives use of cabin air conditioning to either heat or cool the cabin at cold and hot days respectively. The net effect of these factors causes customers to report up to 40% decrease in their driving range on cold winter and/or hot summer days compared to the maximum range they achieve. The cold temperature effect is generally larger for two main reasons: electric cabin heating consumes more power compared to cooling, and batteries have poorer performance at low temperatures."

"Air conditioning (A/C) use during hot days is an important factor affecting the fuel economy in all types of vehicles, since A/C is the largest auxiliary load in many vehicles. Cold temperatures, on the other hand, are particularly disadvantageous for BEVs, since vehicles with internal combustion engines can use engine waste heat for cabin heating, whereas in BEVs heat must be generated using limited onboard stored electrical energy. Reduced efficiency results in increased energy consumption and increased emissions from the electricity grid when BEVs charge. The net effect on emissions varies across the country due to source of electricity generation as well as the regional differences in marginal electricity grid mix."

Then, they were able to estimate the regional effects of temperature on LEAF efficiency:

"To estimate the regional effects of temperature on electric vehicle efficiency, range and emissions, Yuksel and Michalek constructed models of vehicle energy consumption vs. temperature; US temporal and spatial temperature variation, vehicle driving and charging patterns; and US regional grid emission factors.

To establish the relationship between energy consumption and ambient temperature, the authors used publicly available data collected by Canadian company FleetCarma from Nissan Leaf users for more than 7,000 trips across North America, reported as average driving range versus ambient temperature. Thus, the CMU results are based on results experienced by real drivers in actual driving conditions instead of simulation models.