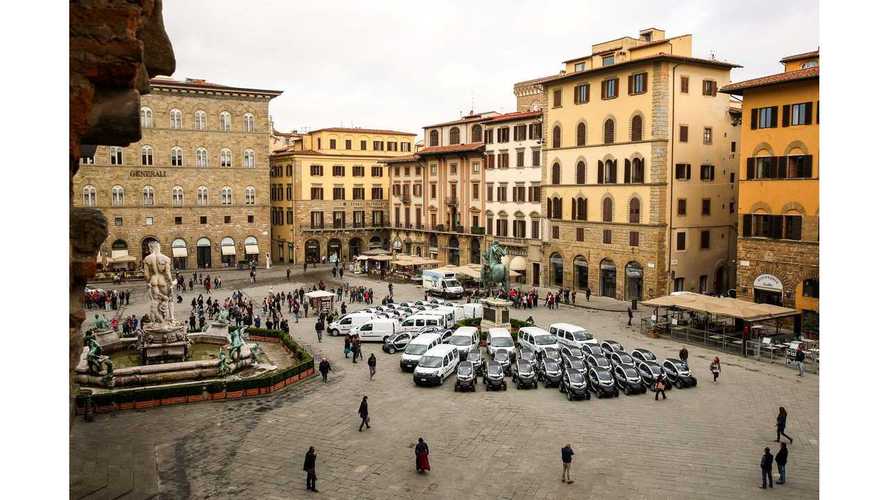 Renault announced a milestone of 15,000 Twizy sales in 40 countries.

The 15,000th Twizy was bought by the municipality of Florence, Italy, which recently received delivery of a whole fleet of electric Renaults - 53 Twizy and 17 Kangoo Z.E.

To further sales of the Twizy, Renault is even putting its toe in the water in North America, as the electric quadricycle is expected to go on sale in the province of Quebec, Canada.

Dario Nardella, mayor of the city of Florence said on the occasion of the 15,000th sale:

“This delivery of a Renault Z.E. fleet is a first step towards the implementation of our program supporting EV use. Florence is a beautiful city with a great historical centre and the environment has always been our priority. We have to lead the way. Promoting electro mobility helps respect the environment, reduce acoustic pollution, and contributes to preserving our cultural heritage, damaged everyday by car exhaust gases."

Martine Meyer, Renault's health and environment spokesperson, citing a study carried out in partnership with ARIA Technologies and the city of Rome, which finds conclusive results at the street level, said:

“Massive introduction of electric vehicles, under support from relevant government authorities, can improve urban air quality and bring pollution levels down below the thresholds set by European standards. With 20% of vehicles using electric power, particulate concentration in the city air could be reduced by up to 30%, and NO2 concentration by 45%.”

According to Renault, the Twizy is well suited to applications like car-sharing fleets, tourist centers, private developments and new urban planning projects.

Twizy, with its unique design, was introduced on the market in 2012 and quickly became the best selling electric vehicle from Renault.

The first 9,000 units were delivered in less than a year. Then, sales sagged and it was overtaken by the ZOE.

The latest markets where Twizy was introduced are Slovenia and Québec. Most sales come from Europe.