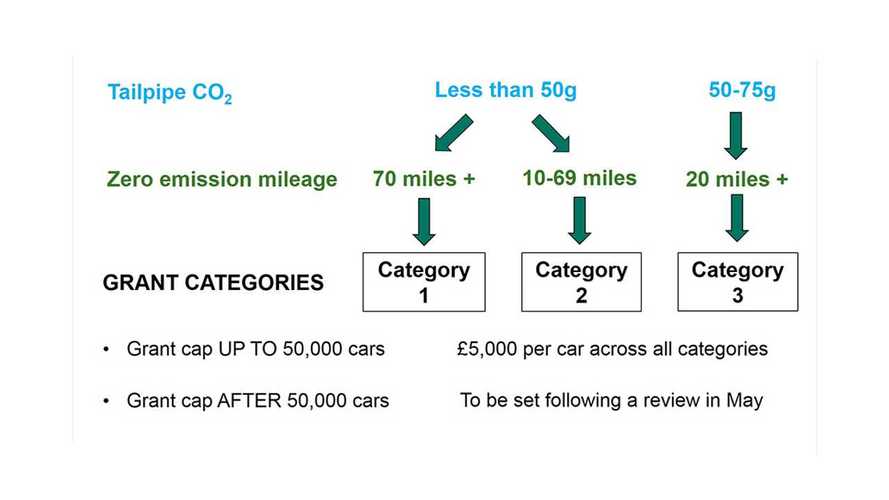 Sales of electric cars are growing quickly in the UK.

The UK Department for Transport, Office for Low Emission Vehicles announced that the cumulative number of ultra-low emission vehicles sold has broke past the 25,000 barrier.

"The popularity of ultra-low emission vehicles (ULEVs) continues to rise sharply, with more than 25,000 plug-in car and plug-in van grant claims submitted since the scheme began in 2010.

Even the traditionally quiet January sales market saw nearly 2000 claims and total ULEV sales in 2014 were some 4 times the level of the previous year. The UK is now ahead of France and Germany in ULEV take-up, placing this country at the forefront of this green and cheap-to-run car technology. The acceleration in popularity is matched by the growing number of ULEV models on the market with some 25 car models and 7 van models eligible for the plug-in grant. A further 40 ULEV models from major manufacturers are expected to come to market over the next 3 years."

"More and more people are deciding a ULEV is the right choice for them. They are great to drive, easily chargeable at home or on the street, and cheap to use with running costs from just 2 pence a mile. The government’s £500 million investment will help more models become available to suit a wide range of budgets. This thriving industry will support jobs and build a stronger economy."

We don't know what will happen when the cap of 50,000 is reached, but the government is preparing for this by introducing three categories for the Plug-in car grant to diversify incentives later:

"To take account of rapidly developing technology, and the growing range of ULEVs on the market, the criteria for the plug-in car grant are being updated. From April 2015, eligible ULEVs must meet criteria in one of the following categories depending on emission levels and zero-emission-capable mileage:

As announced in April 2014, vehicles in all categories will continue to be eligible for the full grant of up to £5000, until either 50,000 grants are issued or 2017, whichever is first. The new categories will better reflect the range of vehicles on the market and make them accessible to the widest range of people.

Grant availability will continue to be promoted as part of the Go Ultra Low campaign which is jointly funded by government and industry. The campaign aims to increase consumer and fleet uptake by highlighting the increasing variety and benefits of ULEVs."