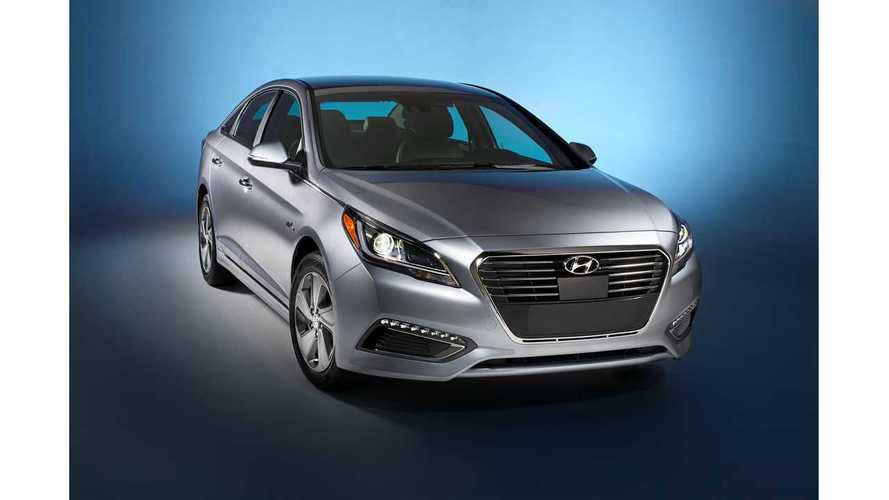 Canada is getting one more plug-in electric car in the form of the all-new 2016 Hyundai Sonata Plug-In Hybrid.

Here are some highlights on availability, launch schedule and specs:

Full details on the Sonata PHEV in press release below:

TORONTO   Hyundai launched its first plug-in hybrid vehicle today at the Canadian International Auto Show in Toronto. The 2016 Hyundai Sonata Plug-in Hybrid Electric Vehicle (PHEV) is expected to travel up to 35 km on electric power and can recharge in as little as two and a half hours with a Level 2 charger. Once the maximum electric-only range has been reached, the Sonata PHEV goes on to perform just like a regular hybrid vehicle.

The company also introduced an all-new Sonata Hybrid. Sonata Hybrid continues to visually differentiate itself from other Sonata models with purposefully unique wheels and front and rear fascias that improve aerodynamics while highlighting its advanced technology and efficiency. The 2016 Sonata Hybrid is expected to deliver improved fuel economy over the previous generation Sonata Hybrid.

Sonata PHEV and Hybrid will be built at the Asan plant in South Korea and will go on-sale later this year. Prices will be announced closer to the vehicles’ on-sale date.

PLUG-IN POWERTRAIN Although the Sonata PHEV is very technologically advanced, it will behave much like the regular Sonata Hybrid from the driver’s seat. A 9.8 kWh lithium-polymer battery pack, roughly five times larger than the Sonata Hybrid’s battery, is expected to give Sonata Plug-in Hybrid an all-electric range of up to 35 km, farther than any other intermediate PHEV sedan.

Sonata Plug-in Hybrid uses a six-speed automatic transmission with Hyundai’s Transmission-Mounted Electrical Device (TMED), a 50 kW electric motor, in place of a torque converter. This electric motor is 32 percent more powerful than the motor used the in regular Sonata Hybrid and allows EV operation at higher speeds and for greater duration. A 2.0-litre four-cylinder GDI engine is combined to the electric motor to power the Sonata Plug-in Hybrid once the battery is depleted. Sonata PHEV’s Nu engine produces 154 horsepower and 140 lb. ft. of torque and the total system output is 202 horsepower at 6,000 rpm.

The Sonata PHEV will be available nation-wide later in 2015. Sonata PHEV buyers will be eligible for a provincial tax credit in Ontario and Quebec.

HYBRID POWERTRAIN The heart of the 2016 Sonata Hybrid is the downsized 2.0-litre Nu GDI four-cylinder engine (replacing a 2.4-litre MPI engine) paired with a six-speed automatic transmission that houses a more powerful 38 kW electric motor and clutch where the torque converter would normally be found. Sonata Hybrid’s Transmission-Mounted Electrical Device (TMED) delivers the same responsive, engaging driving characteristics Sonata owners expect while improving fuel economy through the use of the larger electric motor.

This innovative transmission has been upgraded significantly since its introduction with the original Sonata Hybrid and now uses an electric oil pump, improving efficiency through reduced parasitic loss. Sonata Hybrid’s fully parallel Blue Drive hybrid architecture enables the vehicle to operate solely on electric power, even at highway speeds, by decoupling the gasoline engine from the rest of the drivetrain.

The lithium-polymer battery pack has a capacity of 1.62 kWh, a 13 percent improvement, and it now fits under the trunk floor, which allows for a flat trunk floor as well as 60/40 split-folding rear seats. The 2016 Sonata Hybrid offers best-in-class cargo volume at 380 litres, a 10 percent increase over the previous Sonata Hybrid, thanks to the compact battery pack dimensions and efficient design.

AERODYNAMIC EXTERIOR Sonata Hybrid and PHEV use the same functional design changes to improve their drag coefficient to a class-leading 0.24 as well as provide visual cues to distinguish the hybrid models from other Sonatas. Visual changes to the PHEV’s exterior include a charging port on the driver front fender. Both models feature a unique grille, front and rear bumpers, front fenders, front and rear lights, chrome side sill moldings, badges and new wheels from the regular gasoline-powered Sonata.

A distinctive instrument cluster provides PHEV drivers with additional information about the PHEV system’s functions. A charge indicator is located on top of the dashboard to make it easy to see the state of charge from outside the vehicle.

The Sonata Hybrid instrument cluster is a multi-purpose colour TFT LCD display that provides information about the hybrid system’s functions.

Hyundai engineers implemented many active safety and convenience technologies for the 2016 Sonata Hybrid and PHEV to assist drivers and help prevent collisions. No longer reserved for luxury cars, advanced technologies such as Forward Collision Warning, Blind Spot Detection, Rear Cross Traffic Alert and a Lane Departure Warning System are all available in the Hybrid and standard on the PHEV.

An advanced Blind Spot Detection system is designed to alert drivers of an approaching vehicle in the next lane if the turn signal is activated. This Lane Change Assist technology is a segment-exclusive feature. Drivers are first alerted of a vehicle in the blind spot by warning lights in the side mirrors. When the turn signal is activated, the Lane Change Assist system determines the closing speed of any vehicle in the adjacent lane. If the system determines the vehicle in the other lane is closing too quickly, it sounds an audible alarm to warn the driver. The Lane Departure Warning System uses a forward-facing camera to recognize lane markers. If the system detects the vehicle is headed outside the lane markers without an active turn signal, a warning light on the dashboard illuminates and an audible sound alerts the driver.

Rear Cross-traffic Alert (RCTA) is another feature derived from the advanced Blind Spot Detection system. RCTA scans the areas to each side of the vehicle when drivers are backing out of parking spaces. If the system detects another vehicle is approaching from the side, the Sonata driver is given an audible alert.

MULTIMEDIA All 2016 Sonata Hybrid and PHEV models come standard with iPod/USB and auxiliary input jacks, SiriusXM satellite radio and Bluetooth phone connectivity with phonebook transfer and voice-recognition. An 8.0-inch navigation system, HD radio and Infinity premium audio system are available on the Hybrid and standard on the PHEV.

Hyundai’s 8.0-inch navigation system offers an enhanced display with improved touch sensitivity, a map and music split screen display and the ability to record up to 22 minutes of SiriusXM on presets 1-6. SiriusXM Travel Link provides access to traffic information, sports scores, weather, stock prices, fuel prices and local movie times. All vehicles equipped with navigation (optional on Hybrid and standard on PHEV) will also support Pandora and SoundHound applications as well as “Eyes Free” Siri integration, which allows drivers to perform a variety of functions without taking their eyes off the road. Apple CarPlay and Google Android Auto will take smartphone integration to the next level on the Sonata Hybrid and PHEV at a later date.

Hyundai Auto Canada, established in 1983 and headquartered in Markham, Ontario, is a subsidiary of Hyundai Motor Company of Korea. Hyundai vehicles are distributed throughout Canada by Hyundai Auto Canada and are sold and serviced through more than 210 dealerships nationwide. Hyundai is also the first to offer its zero-emissions Tucson Fuel Cell Electric Vehicle to Canadian customers. More information about Hyundai and its vehicles can be found at www.HyundaiCanada.com.