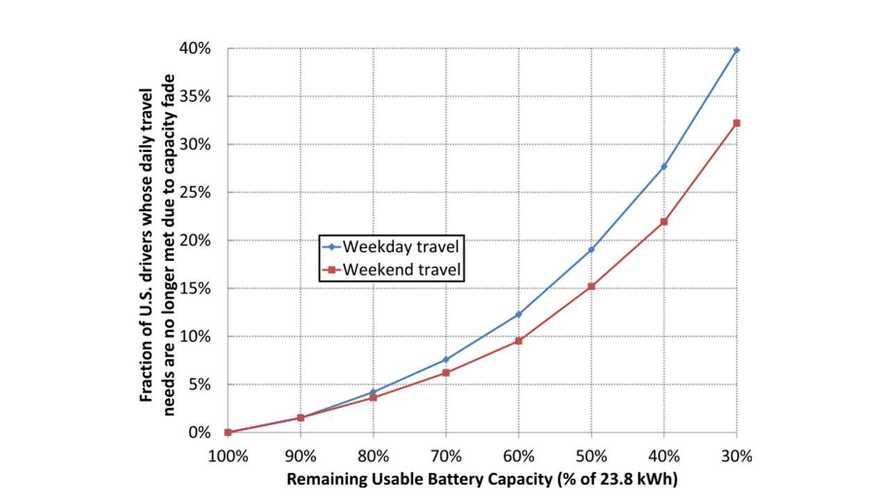 On the statistics side, for years we heard that the range of electric cars like the Nissan LEAF (84 miles EPA) will meet driving needs for the majority of drivers.

According to the study, the assumption that EV batteries will be retired after the battery has lost 20 percent is not necessarily is true - at least on the statistical level a drop of 20% of range in a Nissan LEAF still meets more than 85 percent of U.S. drivers' needs.

Interesting is that even a 50% drop in theory should be above the needs of 80% of drivers (and a 70% drop would meet 55% of drivers' need), but we all know that drivers aren't robots and that most want to have some reserve of range. Tesla Motors on the other side is aiming at over 200 miles of real world range for new cars.

"To conduct the study, the researchers took nearly 160,000 actual driving itineraries from the National Household Travel Survey conducted by the Department of Transportation. These are 24-hour travel itineraries showing when a car was parked or driving, including both weekend and weekday usage by drivers across the United States.

The researchers then assumed all itineraries were driven using a vehicle with specifications similar to a Nissan Leaf, which has about 24 kilowatt-hours of energy storage capacity, similar to many other EVs on the market, and 400 kW of discharge power capability, which was based on battery cell-level measurement data for the chosen vehicle."

Saxena, who has a PhD in mechanical engineering, said:

“There are two main reasons people are hesitant to buy an EV: first, they’re unsure it will satisfy their mobility needs, and second, they’re afraid the battery won’t last the whole life of the car and they’ll have to replace it for a lot of money. We show that, even after substantial battery degradation, the daily travel needs of most people are still going to be met.”

Impact of battery capacity fade on the ability of EVs to satisfy the normal weekend travel needs of U.S. drivers for several scenarios of charger availability (source: Berkeley Lab)

Interesting is the part of the study on charging scenarios. Even the smaller battery pack with significant capacity fade could be good enough if drivers are able to charge at work.

Cheap L1 charging stations at workplaces could extend useful life of EVs and expand the market for potential buyers that are concerned over range.

"People have commonly thought, ‘if I buy an EV, I’ll have to replace the battery in a few years because I’ll lose the ability to satisfy my driving needs, and it’s not worth it,’” Saxena said. “We have found that only a small fraction of drivers will no longer be able to meet their daily driving needs after having lost 20 percent of their battery’s energy storage capabilities. It is important to remember that the vast majority of people don’t drive more than 40 miles per day on most days, and so they have plenty of reserve available to accommodate their normal daily trips even if they lose substantial amounts of battery capacity due to degradation.”

As the battery continues to degrade down to 50 percent of its original energy storage capacity, the research found that the daily travel needs of more than 80 percent of U.S. drivers can still be met, and at 30 percent capacity, 55 percent of drivers still have their daily needs met. “Even if a driver has a long, unexpected trip beyond the normal daily travel, an EV battery with substantial capacity fade can often still make the trip,” Saxena said."