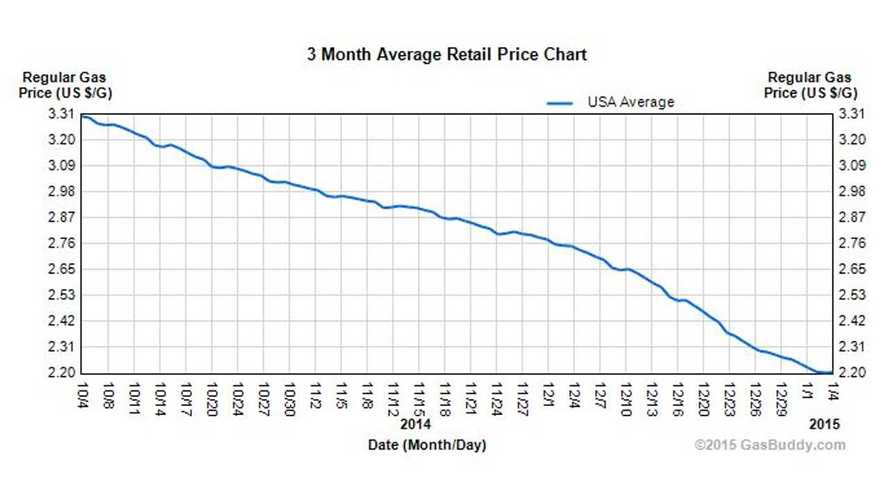 "Cheap gas will kill sales of hybrids and electrical vehicles conventional wisdom holds, but a closer look at the numbers through November shows a more complex picture."

"Somewhat surprisingly, hybrids that still use gas, but don't need recharging, took the biggest hit. Through 2014's first 11 months, gas-electric hybrid sales fell 9% to 418,850, according to hybridcars.com, slipping to 2.8% of the total U.S. light-vehicle market from 3.2% a year earlier."

"Plug-in hybrids and pure battery-driven models actually had a strong year. Sales of plug-in hybrids jumped 17% to 51,490 and sales of battery electrics rose 31% to 55,906, of which the Nissan Leaf accounted for nearly half (27,098). Leaf sales were not only up 35% for the first 11 months, they were up 34% in November when gas prices were well into their decline."

Among the top sellers, aside from the Volt and the Model S, plug-in electric car sales in the U.S. were up almost across the board in 2014.  The vehicles that seem to suffer most from declining gas prices are low electric range plug-in hybrids like the Prius Plug-In Hybrid and Ford Energi models, which indicates to us that when gas prices fall, the plug-in models that offer the smallest of benefits over conventional vehicles become economically difficult to justify.

Pure electric cars sales are not impacted by short-term gas price drops.  At least that's what our sales figures show.