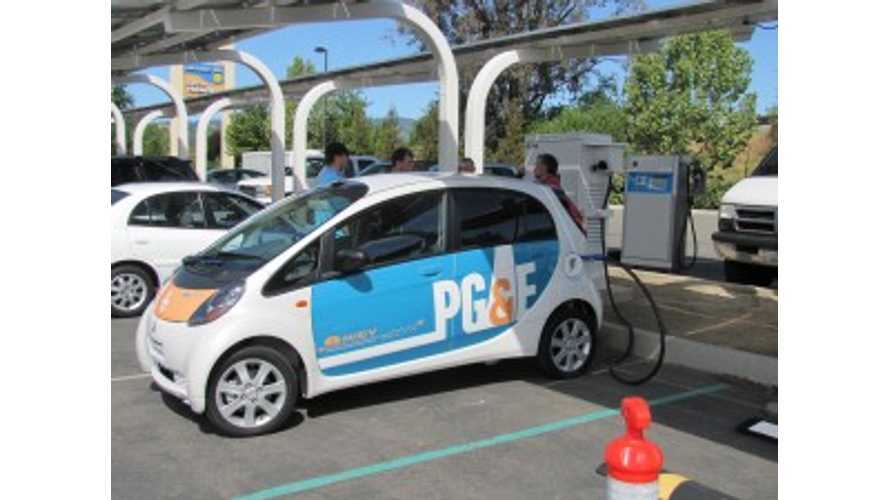 These 25,100 EV charging stations would basically quadruple the existing infrastructure in Californa and also be the largest program in the United States to date.

The San Francisco-based utility says that the chargers would be located at both commercial and public locations, which includes (but not withstanding to) multi-family dwellings, retail shopping centers, and populated workplaces.

The utility company says that inside their service area there are now more than 60,000 plug-in electric vehicles registered - or "more than a fifth of all EVs in the United States."  PG&E itself employs over 1,200 electrified vehicles themselves.

“By supporting market acceptance of electric vehicles, it should create tremendous new opportunities for other infrastructure and technology companies, help keep California in the forefront of EV innovation, and create new jobs in local communities across Northern and Central California,” Earley said.

Total cost on the program if approved won't be available until it is filed with the SEC shortly, but PG&E says that they will provide the charging units at no cost to property owners.

Update: Details on the program are now out.  25,100 charging stations and installations are expect to cost PG&E rate payers $654 million, of that $551 million would be in capital costs.

"The total impact on system average bundled rates would be minimal in 2016 and 2017 and would average only a tenth of a cent per kilowatt-hour over the next five years of the program. A typical residential customer would pay about 70 cents more per month over the period 2018 to 2022. "

Naturally, some advocacy groups, such as The  Utility Reform Network (TURN) is a little concerned with the gross amount being invested into charging infrastructure.

"We are very skeptical about the value of investing so much ratepayer money and betting it all on electric vehicles," said TURN's executive director . "We want to minimize the amount of ratepayer money that goes into the electricity vehicle infrastructure."

Additionally, ChargePoint - who has the most to lose if PG&E goes ahead, also made a statement about the proposal Monday evening, saying the deal was "...bad for ratepayers, drivers and EV industry"

“ChargePoint believes strongly that utilities should play an expanded role in the EV industry and the infrastructure that supports it. However, the proposal PG&E filed today creates a monopoly in EV charging equipment and services that will stifle growth and innovation in the market. - Pasquale Romano, CEO of ChargePoint

“Allowing one monopoly utility to define the EV charging hardware, network, pricing, features and everything in between, will reduce competition and innovation. Removing station owner choice will leave little incentive to innovate or provide better or more affordable services to consumers. ChargePoint has been successful because it supports flexibility for the site owner to decide what pricing and features are best for them to attract the EV driving public.  Additionally, ChargePoint prides itself in providing the features required by EV drivers for a seamless driving and charging experience.

Once installed, the PG&E would retain ownership of the25,100 units but sell the maintenance and the management of the billing of the EVSEs to 3rd party companies.  In this way users of the stations would not receive bills from PG&E, but from the 3rd party.  Those partners would, in turn, be buying their electricity from PG&E before reselling to the end user.

If approved by the CPUC (California Public Utilities Commission), PG&E figures it will take about five years to complete the massive project, while noting the impact on its customers would be negligible.