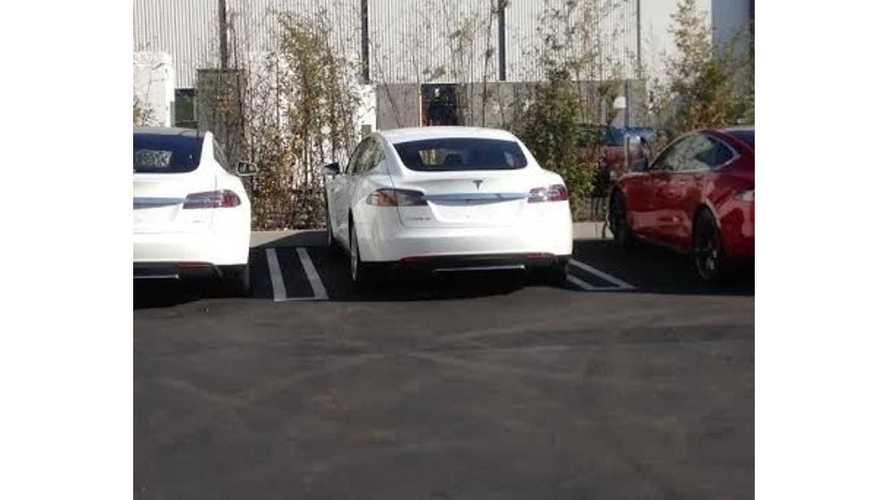 On A Truck This Weekend Heading For Detroit?

Most of the time we have to go out and find the news; sometimes it finds us.

Hrm, Who Could This Be For? (some potentially personal info removed from photo)

Yesterday, at Tesla's Hawthorne, CA facility we spotted a few unplated fancy new white Model S sedans (including the P85D, 85D) in the corner of the parking lot of the Design Center.

Then later we were told these cars were being picked up this weekend to make their way to Detroit for this year's NAIAS - of which we will also be attending again...perhaps we should have asked to hitch a ride?

Unfortunately, there was no Model X stretching its legs in the parking lot at the time to also get an early shot of.

Then we had a closer look at the red P85D, and a curious sign in the front window..."Elon's car", which would seem to indicate Tesla's CEO is expanding his fleet as well.

Also of interest was a note on the car saying "No Seat", which could of course mean "no one should sit in it", or it could be in reference to a early problem with the next generation seats airbag safety.

Some early P85D owners who paid the $3,500 for the new seat option had to have the seats removed before taking delivery, and instead use the standard S 85 seats until replacement next gen seats arrive in early 2015.

Another Looks At Elon's Red P85D