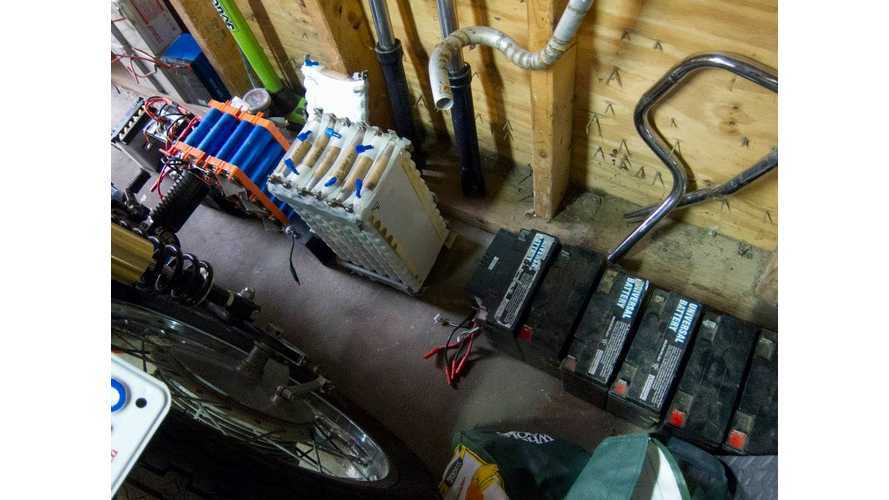 Can we get a clip of "It's All About That Batt"?  Someone?  Since this is heavy on the Maths, let's get some background music for inspiration.  Here you go, our favorite version:

As Elon Musk is fond of commenting, not a week goes by that we don't hear about some new miracle battery.  The problem, as he also notes, is that there are so many parameters and variables in how a battery is used in an EV, there's no one miracle solution.  When you're considering your own build, it's even more complicated, and you really have to start to settle down on what your priorities are for the machine you're building.

The basic considerations?  Range, of course, but that encompasses both weight and storage ability, since your weight has an impact on your efficiency.  More weight, more work needed, and less range.  Cost, naturally, is big, whether you're building something in your garage or you're Elon Musk looking at producing lots of cars.  For our Dream Build motorcycle, though, the biggest single consideration is power-to-weight.

The power-to-weight ratio for a motorcycle has been the holy grail since the very earliest days of motorcycle engineering.  In the mid-'70s a "giant-killer" was introduced by Yamaha Racing - the two-stroke, 350cc TD2, released to the market as the R5 and then the RD350 series.  The motor was incredibly powerful for the weight of the bike, and was routinely raced and got to podiums in the 750cc classes, simply because of it's power-to-weight ratio.  There are a lot of things different about the electric drivetrain, but this isn't one of them.

What is power, when we're talking an electric motor?  Simply, Watts.  Electric motors are rated by the Watts they can handle continuously without melting, and Watts are the product of your voltage multiplied by your current, or amps.  The difference between a 300V battery system that can deliver 100kW (kilowatts, or a thousand Watts) and one that can't is it's ability to deliver the amps.

A lot of the terms and concepts we use are to allow us to be able to compare different things, like batteries, in some similar way.  Watts = amps x volts, so a battery that's 12V and give us 100A is a 1200 Watt battery.  A similar battery may be 24V and gives us 50A.  How does that compare?  Find the Watts, and we see it's identical - 1200W - in terms of the power it stores.  The energy it stores, however, is different - that's the power it delivers over time, or, how long it last before it runs out.  Simply, capacity.

The C-rate is a similar and useful tool.  It's a rating based on the voltage and capacity of the battery to give you an indication of what kind of current you can expect to get, safely, without damaging the thing.  C-rate is simply the capacity, (typically amp-hours) divided by the amps. If we have the C-rating we can solve (kind of backwards) for the amps.  With the amps and the voltage, we can find out the Watts, or, the power from that battery.

How are we doing?  Still here?

Let's look at two examples.  The old Lithium Iron Phosphate (LiFePO4) batteries typically used in EV conversions have a voltage of 3.2V, and we have some cells that have a capacity of 40Ah.  They are usually rated at 2C.  At 2C, the amps we can expect are 2 x 40, (C rating x Ah) or 80A.  Compare that to some of the newer Lithium Nickel Manganese Cobalt Oxide,  (NCM, or LiNiMnCoO2) which are often 20Ah packs, running at 3.7V and with a C-rating of 8C or so.  Those cells are going to give us more like 160A (8C x 20Ah).

This is what we call "battery power" or "battery horsepower", except it's in Watts. This is particularly useful for our Dream Bike Build, since we're running a 100kW motor.  Do we have 100kW available from our battery packs to drive this thing?  That's the million-dollar question.  Fortunately we can put some spreadsheets together to run some calculations which we've done over on The Electric Chronicles.  Here's a look at one example - A123 pouch cells, in the illustration to the right.

This allows us to plug the numbers we know - the cell voltage, capacity, weight and C-rating, and figure what we get for Watts.  Once we have that, we can figure how many of these cells, and in what configuration we need to get to our magic number of 100kW.  (note, in the above, we're giving it a little wiggle room and going for around 140kW.  Our motor is rated for 100kW continuous, so the peak is going to be higher.) Figure out what the weight of those Watts is, and you've got your power/weight numbers.

We've run these numbers for a whole mess of different cells and chemistries, and yes, we're showing you one of the best.  This is a pack that can deliver almost 140kW at nearly 400V, so our motor and controller are going to be in their happy zone.  It's a 7.5 kWh pack as well - which is our capacity.  Figuring on a pretty good estimate of 120Wh/mile for a sport bike, that figures out to an average of 62 miles, which is right in the ballpark of the Zero and Brammo ratings.  Not only that, but the whole thing weighs 126 lbs - about 25 lbs less than the original gas motor and transmission, so if we use this the bike's going to be about the same weight as the 600cc bike.

Are we giving you an idea of how complex the battery question is?  One of the fun parts about doing our own build is that we can cut the decisions down to our basic priorities.  For this build we have one over-riding priority - acceleration, or 0-60 times.  Second in line is our top speed, and low down on the list is our range.  That makes it simple.  Acceleration is purely power-to-weight.  Top speed is purely the power we can throw into it, and range...  well, range is a complex set of interacting variables from the aerodynamic drag, the weight of the machine, right down to how hard we ride it.  The very best we can do is get a stab at our range averages, but that's about all until we get it out on the street.

We can, though, get a bigger picture of what you can expect from a pack.  Here's a little glimpse of how you can select and compare certain parameters - the attribute, AKA "star" or "radar" chart:

This chart compares five attributes: power density in both weight and volume, energy density in both weight and volume, and cost per watt.  For a more detailed explanation see "Moar Battery Calculations: Star (or “Radar”) Charts" on The Electric Chronicles, but quickly we can see the Farasis cells rank high on the energy density scales - that is, they're compact for the storage capacity they give you, but they also cost a lot more.  They also fall short in the power delivery department - probably not a good choice for us, where power-to-weight is king.

Looking at everything, as a manufacturer has to, includes cost, weight, power density, energy density (that is, how much space the pack is going to take up for a given capacity), safety, management, and even supply channels.  (Tesla ain't building a GigaFactory for nothin'.)