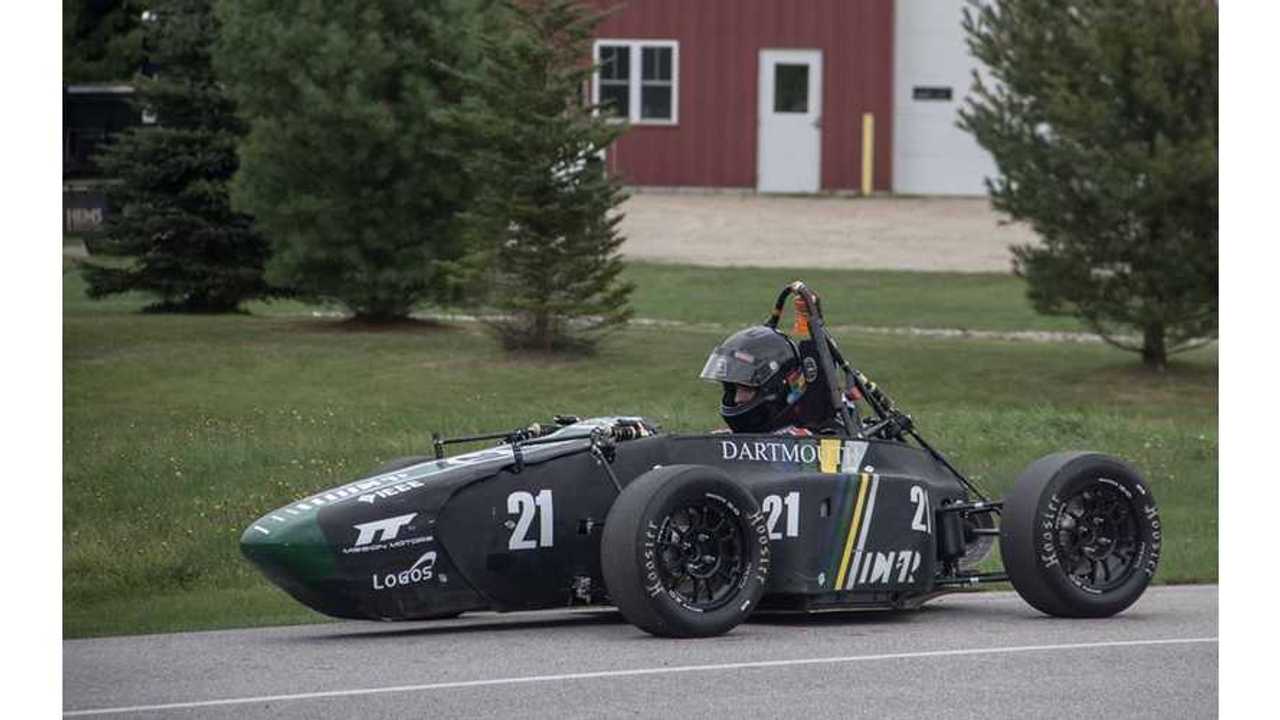 Time for a field trip!

We first met the Olin College REVO team (Research of Electric Vehicles at Olin) back this Fall at the Mt Washington Auto Road ALT E Summit, where they met the Dartmouth College Formula SAE team.  Where we all saw this -------->

That's the Dartmouth Formula SAE entry, complete with the Mission Motors drivetrain (apparently one of the key Mission guys is an alum of Dartmouth.)

It seems the Olin team found this project interesting enough to start one of their own.  We've kept touch with the REVO team, and heard that things are progressing along the race car front so we thought it might be fun to stop in and see one of their design reviews.

The Formula SAE (Electric) competition is through SAE International, obviously, and you can get all the details here, on the site.  There are some fairly stringent design specifications and safety requirements, which is intended to simulate an actual engineering and manufacturing project.  From the site:

"The concept behind Formula SAE is that a fictional manufacturing company has contracted a design team to develop a small Formula-style race car. The prototype race car is to be evaluated for its potential as a production item. The target marketing group for the race car is the non-professional weekend autocross racer. Each student team designs, builds and tests a prototype based on a series of rules whose purpose is both to ensure onsite event operations and promote clever problem solving.

Formula SAE promotes careers and excellence in engineering as it encompasses all aspects of the automotive industry including research, design, manufacturing, testing, developing, marketing, management and finances. Formula SAE takes students out of the classroom and allows them to apply textbook theories to real work experiences."

Inside the "virtual differential"

The project is still in the planning and design phase, and the focus of the REVO team's design is a "virtual differential" using two PMDC motors to allow for torque vectoring - the ability to drive a car through a curve by pushing one side harder than the other - to be painfully simplistic.

The Olin REVO team is a club at the school.  It's not a class, these kids aren't getting academic credit, and they get very little hands-on support from the faculty.  It's their own gig, and intended to be exactly that - self directed, self governed, and a chance for some real-world engineering experience.  The design process is largely collaborative, with teams assigned to each facet of the project, and, as is the tradition there, periodic design reviews where everybody who's interested can sit in, hear and see the team's progress, and add their own perspective and critique.  For their site, with much more information, see this link.  They also have a Facebook page here, which is great for getting updates.

We had the chance to sit in on both the electronics team and the mechanical team's presentations, where we got brief updates on each one of the individual components.

They're literally designing as much of the project as they can from scratch, including the controller and display electronics.  Each team is approaching the car from the standpoint that it's a learning opportunity - a chance to flex their muscles and try out ideas in their own little corner of the engineering universe.

Included in their challenges are attracting sponsors and backers, since neither the project, nor the club, is funded by the school.

At this point they're progressing on the design and in some cases starting on fabricating prototype parts.  The timeframe is to have a car prototyped this year, and have an entry for the competition in 2016.  Like any college team, it's a bit of a moving target, however.  Every year there's a new group coming in, a group matriculating out, and they've worked a little on the organization and leadership of the team to maintain some degree of continuity in a multi-year project such as this.  The Project Manager is John Sakamoto - a Junior - and James Nee, last year's head, is now in more of an advisory position as a Senior.  As Freshmen come in and are attracted to the club, the hope is that they will pick up the torch and start to make the project their own.

One of the more impressive things about this group is the concerted effort they make to reach out to the outside world.  Engineering teams seem to tend to stay within their own circles of influence, where the Olin REVO team makes a big, and very well-polished effort to communicate their work, reach out to sponsors and the community, and, something that often is overlooked, showing their appreciation for whatever support they get.  Check out this team photo posted to Facebook- the original printed for mailings by their friends at Gnomon Copy.

...one of those gestures that's really just a bit of effort, but means so much to a sponsor who's gone the extra mile to help these guys out.

Stay tuned, there's going to be a lot more to come out if this team in the near future.  (And why weren't we building amazing electric race cars back when we were in school?)

Olin College, founded in 1997, is an intimate engineering school nestled in the suburbs of the Boston metro area.  They are a different type of school, with a unique approach and equally different mission:

"Olin was founded to radically change engineering education with the goal of fueling the technical innovation needed to solve the world’s complex future challenges.

In 1997, the F.W. Olin Foundation established the college with a visionary and unprecedented grant “to be an important and constant contributor to the advancement of engineering education in America and throughout the world.” From day one, Olin had no departments or tenured faculty, allowing for true collaboration and integration of efforts."