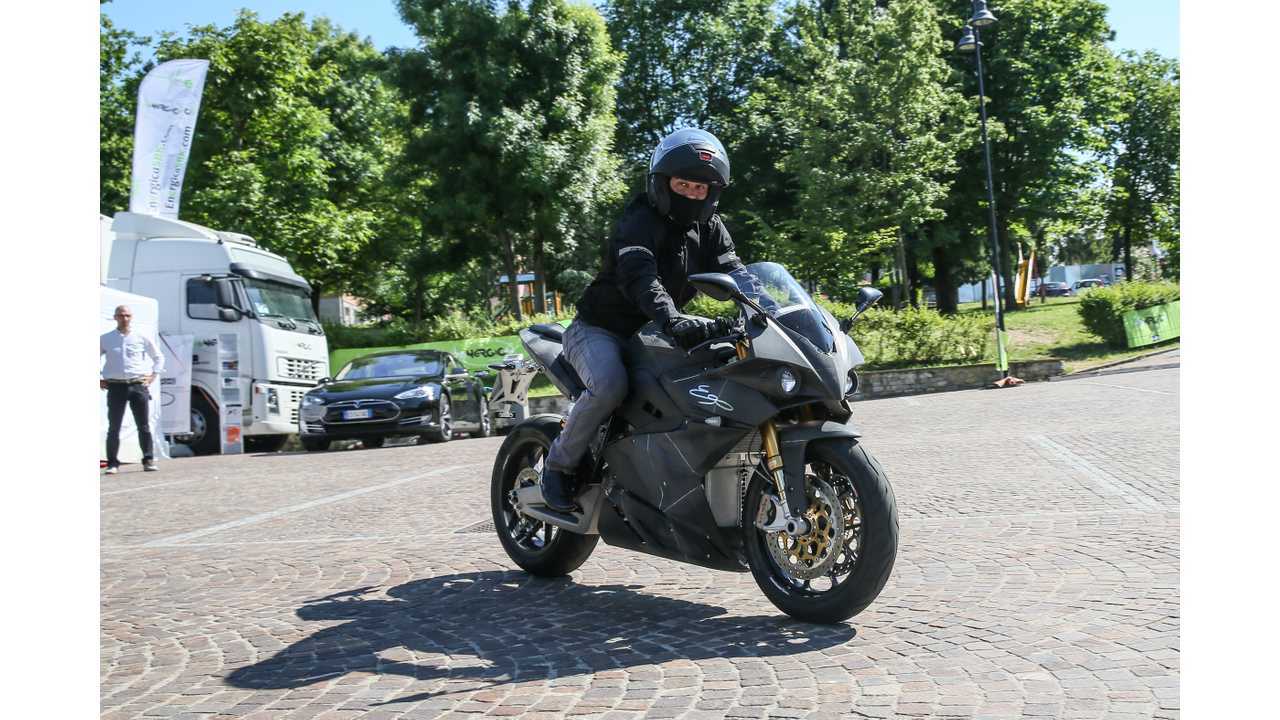 Slipping quietly under the radar this November, Energica delivered its first bike - a fairly remarkable accomplishment, considering the track record of other electric motorcycle companies for delivering the goods after making announcements, and Energica's statements that the bikes will deliver mid-2015.  Maybe they were referring to the US bikes.  Another reason to move to Italy?

On Energica's site is a lengthy interview with Paolo Vanzetto customer #1, here that you shouldn't miss. Here is an excerpt, particularly of interest to Tesla drivers:

- From Tesla to Energica Ego: why have you chosen Energica in order to widen your stunning electric vehicle fleet?

Since I first became aware of the Energica brand, I immediately compared it to Tesla.

The vehicle’s proposal had no compromises in performance, a really nice aesthetic and point of view that could only bring the two companies closer. This feeling was definitively recognized after a chat with Giampiero Testoni, CTO Energica. I was able to understand how his team works hard to integrate the bike’s complex management software, to create a vehicle that is beautifully fluid and user-friendly. The end result is only what matters – a quick response user-friendly machine. This makes the motorbike look like an extension of itself, ready to respond instantly and without hesitation to its own commands.

This is absolutely impossible in a combustion engine, where each pilot’s command is “filtered” by the voids of the gearbox, the torque without a constant supply of the motor and by many other factors related to the mechanical complexity and the inefficiency of the internal combustion engine.

By now I have traveled nearly 200,000 km using Tesla vehicles, and I can say that I know them relatively well. Because of this I understand the feeling of driving vehicles with an electric engine, which is accredited to the raw performance, its shape and absolutely by the operating software and disbursement of the available power.

After having rotated the throttle grip for the first time in the saddle of the EGO, I immediately found myself in front of perfection connecting pilot-machine, with a mutual feeling of absolute control.

It is something that you cannot explain in words, but must be experienced firsthand.  Those who have driven a Tesla or an EGO know exactly what I’m talking about!

We had some more questions, and contacted Vanzetto.  Here's that, with some comments that will be of interest to Harley, Zero and Brammo owners:

IEV: How long have you ridden gas bikes, and what bikes have you owned?

PV: In the past, when I got my bike driving license six years ago, I did not own my personal bike; I was instead driving my father's Harley time after time.  It is a good cruising bike, and a beautiful one to talk about, but I definitely never got crazy about it. I was more attracted towards sportbikes, but because of all the maintenace and the fast wear it is subjected to, I never bought one.

In fact, I love FAST machines (cars or motorbikes), but (especially) about motorcycles, fast ones are very demanding ones. Too much of a hassle to keep them in good conditions, high maintaining costs, high depreciation. And over all, a piece of machinery that you would want to last forever, but instead really wear fast...

And then, electric street bikes started to flow.

In the beginning they were just "concepts". But they grew faster and faster. That was the time when I also met for the first time a real fast electric car, the Tesla Roadster. And suddenly I was dreaming about that huge amount of torque translated on a street bike, with instant acceleration not needing clutch and gears, continuos thrust, no maintenance. And no wear.

When I tried for the first time an Energica EGO protoype on the beautiful hills of Modena, five months ago, I knew that suddenly it was no more just a dream...

IEV: Do you think you will buy another gas bike soon?

Really, when you have tried the tremendous amount of torque that only an electric motor can instantly deliver, you never look back in the same way at the old good internal combustion engine. Yes, you can say that you like switching gears, and that you like the "sound" produced by the explosions in the combustion chamber, and the smell that get out from the muffler. But really, what your body truly likes to feel is TORQUE. And no ICE engine can give you huge and constant torque from 0 rpm. It is addicting.

Now it is more than five years that I drive only electric (and I drive a lot). Getting back to an ICE would be a huge step back, when you get acquainted with the feeling of instant control and power that a properly-made eletric vehicle can deliver...

IEV: Did you consider any of the other bikes - Mission, Lightning, Brammo, Zero?

PV: Sure I was interested in researching about every evolution the electric bike market was taking. But Mission and Lightning was (and are...) not really production vehicles, but just individually homologated for street driving prototypes. Or for track use only motorcycles. Brammo and Zero was real production road-ready bikes, even if not so powerful. Nonetheless, in my opinion, they were the right path to follow to get to real mass-market production electric bikes.  But I think that one of the main positive advantage of electric vehicle is its inherent mechanical simplicity. So why add the gears to your bike, Brammo? When you have an instant-torque electric motor with an inverter that can replace all the gears you will ever need?

And so, when I was looking for a real e-motorcycle two years ago only Zero was a true attempt to get real electric bikes to the road. I drive a Zero S from 2013, and I can say that I never regret choosing it. Yes, it is not built with top-of-the-line components, it is not the fastest bike on the road... but it is a beauty to drive, with a perfect torque-control that I know only an electric bike can deliver. The ability to switch from a really calm drive to a hellish rush just rotating your wrist is priceless.

And then came the Energica EGO...  All the goodies of an electric motor, with incredible top-of-the-line components and superbike performance is something I was not expecting so soon.

I think that now the electric superbike era has truly begun!

We'd have to agree, Mr. Vanzetto.  Congratulations, and happy trails from the envious crew at InsideEVs!

Riding off into the Italian countryside