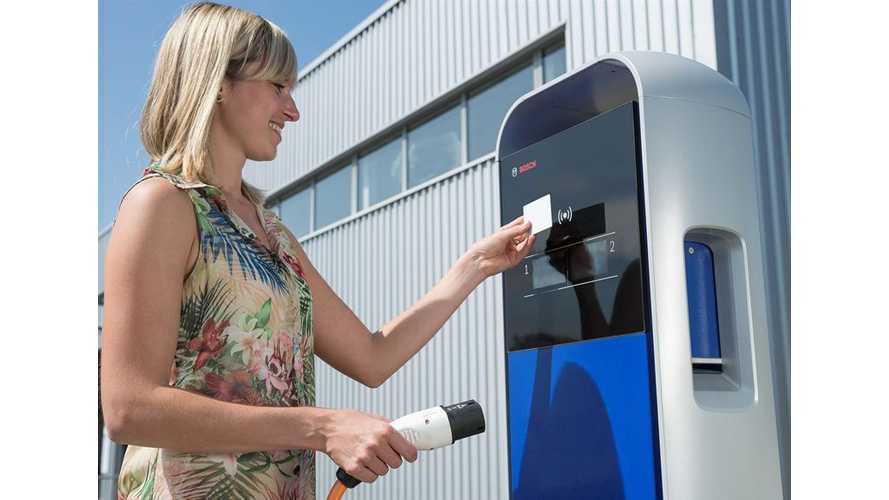 Bosch, as one of the largest suppliers of automotive components, released a few bold statements at the Car Symposium in Bochum, Germany.

First is that low oil prices will not change the growing pace of powertrain electrification.

The most important forecast put out by Bosch is on battery prices - by 2020 half the cost and double the energy density!

This should trigger electric car sales growth to allnew levels.

Bosch is developing charging stations and a connectivity system. In Germany, 80% of charging points are running on Bosch's software platform.

"At the moment, recharging vehicles is complicated. But this is expected to become much more convenient. Bosch Software Innovations, the Bosch Group's software and systems unit, has developed an app that makes it significantly easier to reserve the charge spots of different providers and pay for the electricity. Up to now, doing this would have required a different customer card for each provider. Now all drivers need is a smartphone, the app, and a PayPal account to recharge anywhere in Germany. Bosch also complements this with a software platform that links 80 percent of all charge spots in Germany. As this example shows, Bosch no longer sees itself solely as a supplier of automotive components. The company is now combining its expertise in all three mobility domains – automation, electrification, and connectivity – and will in the future be offering its customers integrated mobility solutions."

The other area of electrification is e-bikes:

"Fun as a reason to buy: e-bikes show the way

However, rational arguments alone are not enough to win drivers over to electric powertrains. In Bosch's view, emotion and fun play a decisive role. The example of e-bike drives illustrates this. Bosch's “electric tailwind” makes riding a bike a joy – for serious athletes as well as recreational cyclists. Bosch is now the European market leader in this area, and its e-bike drives feature in more than 50 bike brands. “The e-bike is the most successful electric vehicle in the EU,” Denner said, adding that customers pay considerably more on average for e-bikes than they do for classic ones. “For more than 100 years, riding a bike was a mechanical process. No one saw any reason to change it. Then along came the e-bike, and completely redefined a market everyone thought would never change,” Denner said. The same could be true for the auto industry, he added. The Bosch CEO stressed that the supplier of technology and services will be using its comprehensive systems and connectivity know-how to take electromobility a decisive step forward."