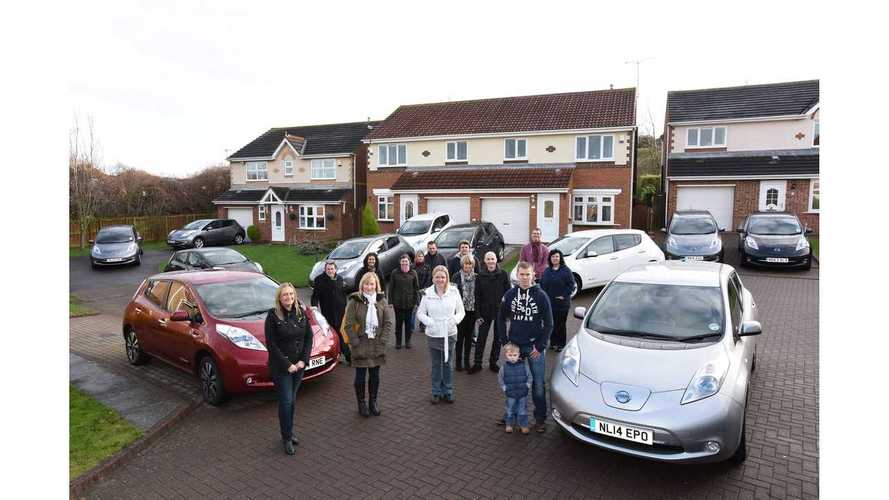 The My Electric Avenue project in the UK, which seeks to discover if the local electricity networks can cope with charging a group, or ‘cluster' of EVs at peak times, attracted a lot of willing individuals to test a Nissan LEAF for 18 months.

The initial goal was to recruit 10 households in 10 streets across the country, but as it turns out they gathered over 200 participants and on some streets there are over 20 LEAFs!

"Individuals taking part in the trial are leasing Nissan's 100% electric LEAF for 18 months whilst trialling a new technology designed to test the effects of electric vehicle charging on the local electricity network and control the vehicle's charging patterns if the load on the grid exceeds capacity.

My Electric Avenue set out to recruit 10 households in 10 streets across the UK to drive an all-electric Nissan LEAF for 18 months. Despite this being seen as a challenging goal, the project has exceeded its targets, with more than 200 participants taking part across My Electric Avenue's ‘technical' cluster and social trials, each driving a 100% electric Nissan LEAF."

"The cluster in South Shields was started by one such champion; Julie Skevington. Julie drummed up interest in her local community, encouraging her neighbours to become involved in the trial, and now a total of 23 people drive the Nissan LEAF in the area as part of the project. This is believed to be a record number of drivers of this electric car in such a small area. In fact, the group was so large that it was spread over two different feeders from the local electricity substation, to form two clusters next to each other."

"As well as testing new technology, My Electric Avenue is also exploring the acceptance amongst electric vehicle drivers of direct control of their charging. Of course Nissan LEAF owners can already control their own charging by pre-programming when they want their car to charge. Ideally, charging would be set for off-peak times, such as between midnight and 6am. By doing this, electric cars can help to balance out the peaks and troughs of electricity demand during a 24-hour period, as well as potentially making it even cheaper to run an electric car.

Having exceeded the recruitment targets for the project, My Electric Avenue is now in the phase of collecting data about charging, and the impact it has on the local electricity network.

In total, over 100 people were recruited to drive the Nissan LEAF as part of My Electric Avenue's ‘technical' cluster trials, in addition to more than 100 people in the project's social trials."

"The all-electric Nissan LEAF is a pioneer in its own right and we're delighted that it is playing such a major role in My Electric Avenue's ground-breaking research."

"Not only is My Electric Avenue helping us to understand the impact of electric vehicle charging in concentrated areas, but it is also giving us a clear vision of what the streets of the future may look like, and that is very exciting."