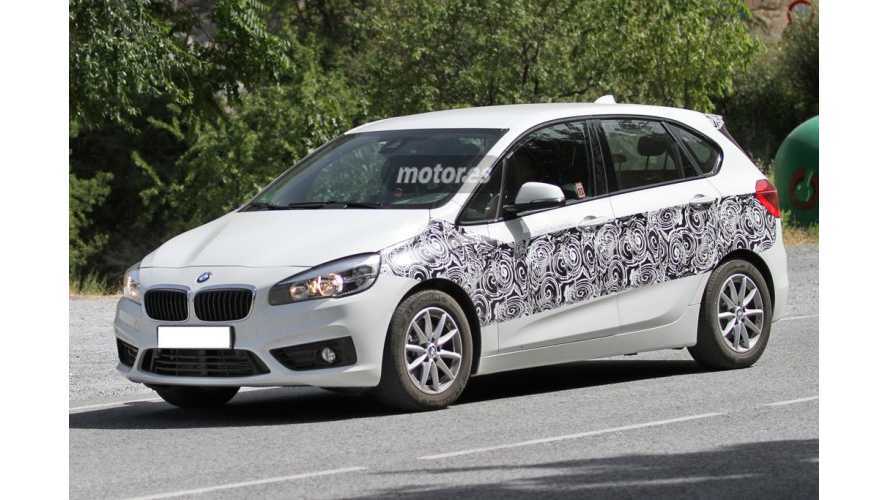 This model will be called BMW 223e SAT (acronym for Sport Active Tourer) and the internal code of its propulsion system is XB2149M0, corresponding to the same powertrain that sat in the BMW Concept Active Tourer Outdoor.

The BMW 2 Series Active Tourer plug-in hybrid was spotted wearing little camouflage during a test trial in Spain. The light camouflage tries to hide the plug-in cover on the left front fender and some final design details.

Other specific details of this model are the roof wing that helps with aerodynamics and a “mysterious” metal box on the rear axle.

The front spoiler design is specific to this model compared to the one fitted as standard and optional with M package.

In the concept form, BMW announced that the combined power for the hybrid is around 200 horsepower from a gasoline engine and electric motor. It remains unknown if it will be offered with the xDrive option.

*Editor's Note: this post appears on BMWBLOG.  Check it out here.

The petrol engine in the car is the 3-cylinder 1.5 liter TwinPower turbo.

The model will benefit from the latest technology from BMW: a revamped version of Connected Drive, LED headlights, Automatic air conditioning, control of charging process via mobile app and various driving modes.

BMW will premiere the 2 Series Active Tourer eDrive at the 2015 Frankfurt Auto Show.